There was a very (very!) brief temptation to start this off with a stunning announcement of a new breakthrough medicine having been found.  But that would truly be a beyond-cruel April Fool’s Day joke.  Actually, and maybe I’ve just not been looking in the right places this year, but I’ve not come across the usual broad swathe of jokes that usually can be found today.  That would be sad – we need a leavening of levity in this grim times.

We mentioned yesterday that we feel our mission with this diary is in part to spread truth and counter distortions and outright lies.  Some have chosen to interpret that as a pro-Trump policy (without realizing the implication they are acknowledging that to do so is to Trump’s advantage).

But we’re not happy to see that Google is now refusing to allow Democrats to, as an article yesterday amusingly says “spread true information about President Trump’s handling of the outbreak”.  Clearly, the concept of “truth” is way more subjective than it should be, but in cases like that, we really do not feel it is the role of a private company to arbitrarily decide “this is all too hard so we’ll censor all debate/discussion on the topic entirely”.

Today the “truth” Google refuses to acknowledge is the controversy over the Covid-19 virus – which, may we mention, is the number one topic in almost everyone’s mind at present.  The big fear is what other “truths” may Google demand we go silent on, tomorrow?  Abortion?  Gun rights?  Climate change?  Immigration?  There are lots of contentious issues in our country, and we prefer that all such issues be allowed a thorough airing, not to be silenced.

Not long after the Google announcement, another article appeared that has an unfortunate headline, but its substance is that Twitter is now censoring Covid-19 related opinions that it doesn’t agree with, too.

I really don’t care whether these major internet sites are censoring pro or anti opinions.  I don’t think they should censor either.  Yes, there is a selfish reason for saying that.  How long before my articles become censored, too?

Iceland moved up one position today and Gibraltar reclaimed its place at the bottom, displacing Spain.  The seven states of any size with the highest infection rates are :

Here are the top six major countries, showing death rates per million of population in the country.  There were no changes in ranking today :

To put those numbers into context, the death rates per million in US/UK/Canada are 15/35/3. 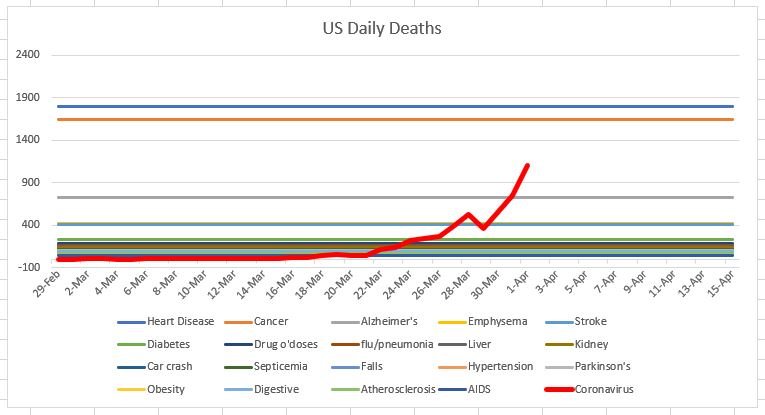 It seems we’re not the only ones charting daily US deaths and comparing the number to other causes of death.  Several media outlets reported that yesterday saw the daily death rate (775 cases yesterday) now exceed the daily death rate for Alzheimer’s (732/day on average) making Covid-19 the third most common cause of death in the US.

So far today, with final numbers not yet received, it seems we’ll end the day at maybe 1050 deaths, being the first day we’ve ever exceeded 1,000 deaths in a single day.  The prediction that the peak death day will see 2,271 deaths on 15 April is starting to look optimistic rather than pessimistic.  I’ve shown on the above chart a blank space between now and 15 April, and a vertical axis going up to 2400.  Where do you think the curve will continue?  Projecting deaths between now and then, looking at the past data, seems to suggest we’ll be at a daily rate of 2271 some days prior to 15 April.

My big fear is that we’ll pass the 2271/day death rate and continue climbing.  Looking at the daily new case count, there’s not yet any clear sign that we’re past peak new cases (but keep in mind the potential distortion as we test more and more prevalently), and until we get 10 – 20 days past peak new cases, we can’t really hope for peak deaths to occur.

Bill Gates is less sanguine than the federal government about how long it will take to turn around the virus numbers in the US.  Repeating or even amplifying a previous statement, he says we’ll need ten weeks or more.  He also says a vaccine could be fast-tracked in less than 18 months.

The reality is that a much more widespread shutdown/lockdown would start to drop new infection numbers within a week, and to drop deaths in 2 – 3 weeks.  The problem is not achieving that state – the problem is maintaining it.  Whether we achieve massive drops in two or ten weeks is not the problem nor the issue.  The real problem is keeping those numbers down, and currently we have no strategy for that, whatsoever, other than for extended similar social distancing and movement constraints.

Even with much greater testing, a test is only accurate at an instant in time.  It is like going to a busy whore-house, where the prostitutes invite you to have, ahem, unprotected intimate relations with them.  “There’s no need to worry, honey”, the lady you’re talking to tells you.  “We were all tested yesterday”.  As in, ahem, ten or twenty partners ago.

The only three things we can hope for currently, prior to more statistics on actual mortality rates, are

Another China puzzle.  If it is now clear of the disease, why has it reclosed all its theaters, nationwide?

There’s one dismaying closure that threatens me, personally.  The mail order medicines I ordered from India a week ago were supposed to be arriving on my doorstep about now.  But they have not yet even left India.

The company tells me that with the disruptions to air services, priority/courier (EMS) type packages are being delayed pending available flights.  I have a tracking number but it is consistently just reporting “label details advised, package not received”.

Although this story is a week old, it is a very frustrating read – what happens when bureaucracy confronts a dynamic marketplace.  The article tells what its writer saw during a day with a broker in medical supplies, with particular reference to masks for sale.  It is a week old, so much might have changed, but during that one day, the writer estimated that some 280 million masks, in stock across warehouses in the US, were sold to various buyers.

Of those 280 million, he thinks all were sold to overseas buyers, and not a single mask to a US healthcare system.  While healthcare providers were fussing about details, and unable to promise/guarantee certain payment, private buyers were instantly responding and, in a scarcity situation, it is the first person with money in his hand who gets the goods.

Here’s some good news.  The numbers of people shopping at major stores such as Walmart, Costco and Target, is falling.  This suggests that everyone is done buying twice the normal amounts of food and supplies, and now the supply system can catch up with the sudden spurt of demand.

The good news?  Free drive up testing is available in Detroit.  The bad news?  You need to go to a doctor first and get a prescription authorizing the test.  And, for many people, that’s difficult/time consuming, and a far cry from the implied promise of driving to a testing location and getting tested, all as part of a single smooth process.

Here’s a very dismaying story.  The “hero of the hour”, Dr Fauci, has now been provided with security protection, due to the rise not only of threats against him but also of, ahem, too-fervent admirers, too!

First Prince Charles completed his seven day social-distancing stint due to being diagnosed with the coronavirus, and now Prime Minister Boris Johnson is scheduled to do the same – also after a mere one week of isolation.

We really don’t feel good about these short one week periods, compared to two weeks almost everywhere else in the world.  In particular, imagine if Johnson comes back to work, still infectious.  He could pass the infection on to almost the entire political and administrative leadership of the United Kingdom.  May we too urge, “out of an abundance of caution”, he accept another week of video conferencing rather than in-person interactions.

If this article is correct, there’s the possibility the virus may have mutated into a new form that could possibly become chronic.  Once you get infected, you have it for life.  It is hard to imagine a worse outcome than that, and we desperately hope there is some other explanation, and/or that it is a one-off mutation that has been contained and not allowed to spread further.

Here’s an interesting observation – immediately after it was announced that the Olympics would be delayed a year, there was a sudden pronounced spike in virus cases in Tokyo.  Presumably just a coincidence?  The article wonders….

I liked this article.  It is a long essay on lessons that can be learned from Italy’s response to the Covid-19 virus.  I agree with most of it, in particular how the exponential nature of the virus spread made it impossible for most people to picture the enormity of what was about to happen into the future.  And there was one statement, quoted from the head of Italy’s equivalent of FEMA, that really stood out.

The virus is faster than our bureaucracy

But don’t underestimate bureaucracy – nor vested interests.  Here’s a terrible article explaining what is happening in France, where vested interests are said to have hijacked the public health system and are using it for their corporate profits, including hiding/stealing the nation’s supplies of chloroquine while arranging for future supplies to almost certainly be made at a much greater cost per tablet (previously you could get nine tablets for US$1 in France).

They’ve also changed the status of the drug from an over-the-counter drug that anyone could buy from a pharmacy to now only being available with a prescription, and are denying Covid-19 patients access to it during the early stage of the infection which is when the chloroquine is said to work.

Please stay happy and healthy; all going well, I’ll be back again tomorrow.