This is a rushed diary entry today, mainly offered to provide a continuity of the data series I’m publishing every day.

Most of my day has been working on an ambitious two part article, now at 7,000 words, on what to expect for the future.  I think I’ve come up with a new reason and purpose for this diary series – at first it was to understand and explain some of the complexities of the unfolding crisis, but I feel we’re almost at the point where we can move past that.

If you’ve been reading some of my daily diary entries these last three weeks, you now know much of the key things to understand about the imperfect nature of our understanding of everything to do with the virus, its past and its present.  It is time to start thinking about the future, and I sense a growing idealistic restlessness across the world, as people yearn for a return to normal life.

You’ll not be astonished to learn there’s not a politician on the planet who has yet realistically stood up and told his electorate – “Suck it in, even when we get the current new cases and daily death rates under control, we’re only at the beginning not the end of this struggle”.  No-one has really dwelt overly long on the issue of how much social-distancing we can allow again when we feel things are back to normal.  The answer will disappoint you, and in some cases, it will be necessary to persuade and explain why we can’t instantly go back to normal.

As example of that, a reader sent in a well written critique today about yesterday’s diary entry, calling me out being as mean-minded as to try and report a group of neighbors to the police for violating WA state’s “Don’t leave home” requirements.  She apparently saw no harm in a group of neighbors all mixing/mingling, and ignoring all social distancing and stay at home requirements that are currently in place.  She’s clearly a thoughtful lady, but has colossally failed to comprehend the nature of the virus threat to us all.

You can see her note and my response here.  Please let me know if you feel I need to explain my point of view further.  I’m happy to do so, because the life I might save by doing so could very well be my own!

Here’s an example of a country that feels it is winning the virus battle.  But their plan for the future is not one we could consider, and frankly, it is wrong for them too.

The country is my home country of New Zealand.  They quickly moved to a total national lockdown, and it seems the lockdown is now starting to diminish the number of daily new cases being reported, and, like many other countries, they’re daring to think of a near future when they’ve totally eradicated the virus from the country.

What will they do then?  They are talking about keeping the entire country essentially locked down until the virus has been removed from the entire world.  They might let some foreigners in, but with mandatory quarantines, likely of a duration such as to make it impossible/unappealing for tourists, and too time-inefficient for business men.  We would hope that when accurate testing is available, they could modify their policy of quarantining every person, but this is all getting ahead of the reality for you and me, in the US or other major nation.

The reality is that NZ is one of very few countries in the world that can truly 99.999% isolate and close its borders.  The next nearest country is Australia, almost 1500 miles over a sometimes very rough ocean.  But for most countries, with semi-porous land borders, closing the country down entirely is impossible.

So, stay tuned for my epic two parter, tomorrow, on what is possible for us, and how long it will all take.

Luxembourg and Iceland traded places again today.  Here are the rankings for the seven states of any size with the highest infection rates, which are :

Here are the top six major countries, showing death rates per million of population in the country.  There were no changes in ranking today :

To put those numbers into context, the death rates per million in US/UK/Canada are 39/91/10.  Of note is that the UK is now closely next in line after Switzerland.

The difference in policy between Sweden, with its lax permissive approach to social distancing, and Norway with its much stricter policies continues to attract surprise and concern. 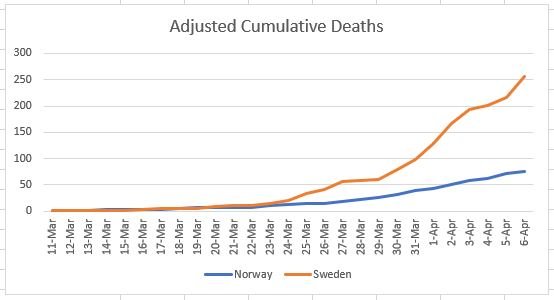 As can be clearly seen in the above chart, there is a growing divide in death rates per million population between the two countries, with the divide starting to appear when Norway’s social distancing requirements started to flow through to resulting death rates.

Clearly, Norway’s policies are much more beneficial to Norway than Sweden’s are to Sweden.  Something to keep in mind as we start to debate how to modify our own policies when our new infection rates drop.

There’s a great chart here that allows you to choose county level data, expressed in terms of cases per 100,000 of population.

You may be surprised to see that the county with the greatest concentration of virus cases is nowhere near New York at all.  It is Blaine County in Idaho, with a rate of right around 2,000 cases per 100,000 people.  That’s a complicated way of saying that 2% of the county has the virus.  One in every 50 people.

That’s an appallingly high rate of infection, albeit in a small county.  But we still see our glass as half-full.  If the worst county in the country is still at “only” 2%, not the 50% – 70% that doomsday predictors have been claiming for the entire country, then perhaps we’ll get on top of this thing with much less than the worst projections have been threatening.

Here’s an appallingly stupid article that claims school closures have little impact on the spread of the virus.

Yes, we understand that children are largely spared the worst of the disease’s impacts.  But the article and its writers fail to consider a vital point, while “cleverly” comparing it to totally different viruses to “prove their point”.

That vital point?  Children can still be infected by the virus, and – most of all – can still pass it on to other people.  Other people, such as their parents and other adult family members.

Still on the subject of appallingly stupid things in Britain, how about the idiots who decided to proceed with the running of a half marathon race in Bath.

Keep in mind that the virus can spread through normal breathing, not just coughing.  So when you’ve a group of 6,200 runners all running together and panting together; well – look for the new cases and subsequent new deaths in the weeks that follow.  Practical Darwinism, in action.

This adds to our fear that after an initial over-reaction of mindless panic by many, we are now seeing an over-correction to a state of mindless euphoria.  The virus is still out there, the same as it was yesterday, and – alas – the same as it will be tomorrow.  We need to keep our careful social distancing behaviors in place, accordingly.

Good news about a test to see if a person has already been infected or not.  That is one of the most essential mysteries to answer, and present tests don’t look for that, just to see if a person currently has the virus.  The test does have shortcomings, but it will help us to get something more than sheer guesses as to the number of unknown cases that have been happening quietly in the background, and, as a result, hopefully the number of now immune people that through herd immunity will help prevent the virus’ spread.  We discuss this more in our lengthy article pair tomorrow.

The Dow hesitated today, not surprising after its elevator ride upwards yesterday.  It dropped 0.12%, losing 26 points to close at 22,654.

I thought I was being funny yesterday when after reporting a possibility that the virus might also harm one’s brain, I then wondered what might be the next part of the body to suffer damage – possibly even sexual organs?

Alas, you know the expression “many a true word spoke in jest”.  Apparently, there may be some damage to male fertility.  Reader Bruce sent in this article.  As I’ve said before, this virus just keeps getting worse and worse.

Here’s still more censorship on a virus related topic – the fanciful nonsense that 5G cellphone towers are in some way spreading or causing the virus.  But we continue to feel very uneasy about this.  By censoring such nonsense, it disappears off the radar screen of normal ordinary sensible people, but allows the purveyors of such pernicious nonsense to now claim “this is so special and important that the (shadowy government forces) are preventing us from sharing it with you”, and thereby almost validating their claim to have special secret knowledge.

If it was exposed for all to see, it would become a popular joke and the people making such claims would be laughed off the face of the internet.  But by censoring it, there’s a strange sort of implied acknowledgement of the seriousness and therefore validity of their claims.

The most dangerous sort of censorship?  Well-meaning censorship.

I wrote about tigers getting Covid-19 yesterday.  Here’s another, and this time sort of nice, article about the impact of the virus on zoo animals.

Please stay happy and healthy; all going well, I’ll be back again tomorrow with my two part magnum opus.