As you surely know, Boeing’s newest range of 737 MAX planes were grounded in early March after two crashes, both causing everyone on board to lose their lives.  The two crashes related to the same equipment issue, now understood to involve inadequate programming of an automatic stability system.

The fix for the problem is fairly straightforward, and Boeing claims to have already made the necessary changes and now simply to be going through the approval process with the FAA and such other certifying bodies as may wish to independently scrutinize the changes.

There has been a lot of discussion about the problem, and the process and apparently poor oversight that allowed it to occur, and concern has been vaguely expressed that lingering fears about possibly other as yet unidentified issues might also be present.  Most of all, some industry commentators have opined that the traveling public may be hesitant to fly a 737 MAX after they are returned to service, something expected to occur probably in about another couple of months time.

These concerns echoed similar concerns when the (then) new 787 was grounded for three months, starting in January 2013, after several fires erupted in the new Lithium ion on-board battery systems.

We were curious about what people really thought in both cases.  We had surveyed our readers back in 2013 about the 787, and so decided to repeat the survey again now, with almost identical questions, to see if the attitude to the 737 grounding and future expected safety would be similar or different to the attitude, six years ago, to the 787 grounding.

Travel Insider readers tend to be better educated than average, much more frequent travelers than average, slightly older than average, usually with above-average incomes, and slightly weighted to be male rather than female.  About two-thirds are in the US, and most but not all of the balance are generally in other English speaking countries.

We asked our readers to choose which of eight sentences most closely matched their opinion of the 737 and if they’d fly on it in the foreseeable  future.

Answers were as follows : 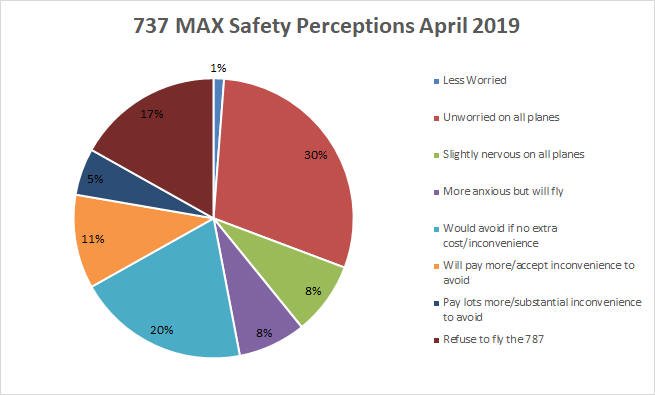 As can be seen, slightly more than half of all readers admitted to some type of active plan to avoid the 737 MAX, with another 8% adding they’d be slightly more anxious but that wouldn’t interfere with their accepting a 737 MAX on an itinerary.  Only 39% seemed to have no concerns at all about the plane.

We suspect that some of the people who said they’d refuse to fly the plane and perhaps also a few of the people who said they’d pay substantially to avoid the plane may actually end up accepting 737 MAX flights if no reasonable alternatives exist, but clearly, at this point, there does seem to be a tangible likelihood that a measurable number of passengers will book away from the plane when it returns to service.

How does that compare with attitudes to the 787 grounding?

We had asked the same question twice about the 787 – once during the middle of the grounding period, and the second time after the plane was cleared to resume normal flights again.  The two sets of survey results were : 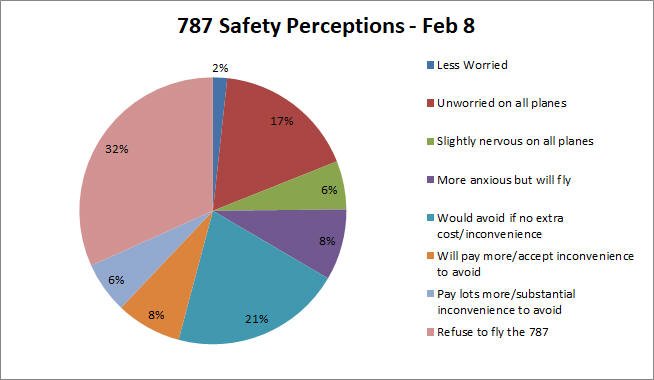 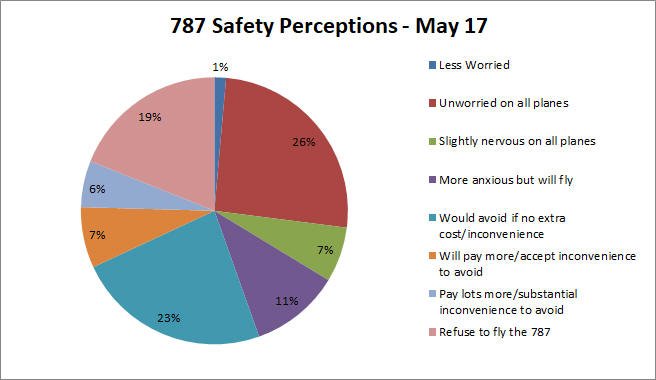 It seems that people were more initially cautious about the 787 than they are now about the 737.  This is slightly surprising, because the 787 never crashed.  On the other hand, there were multiple cases of battery fires, and the lack of crashes was more due to good luck than anything else.  Additionally, the process of the battery fires was more mysterious and perhaps more visceral than a glitch in software.

As can be seen, and implying good news for Boeing and its 737 MAX equipped airlines, once the 787 was cleared to return to service, the number of people most concerned about the plane greatly reduced.

We haven’t been able to find any clear data on whether there was any measurable impact on 787 flights due to passenger avoidance after the planes returned to service, and with the very good “press” the plane was receiving about being more comfortable to fly on, there were positive reasons to encourage people onto the plane to offset the negative reasons to avoid it.  Within our small purview, we were aware of people who said they’d avoid it.  Indeed, we ourselves also successfully avoided the plane for several years before first taking a flight on one, and now we too do so without pausing to worry or consider any element of increased risk.

There are certainly no offsetting benefits/advantages of choosing a 737 MAX over any other single-aisled plane such as the A320 series or the new A220 series.  But we expect there’ll be little or no measurable impact on flight loadings once the 737 MAX fleet returns to the skies.