December results are out (for example, see this excellent tabulation), and unsurprisingly, the car with the most sales in the US for 2017 was the Tesla Model S, with a total of 27,060 cars sold.  But, Tesla’s typical self-congratulatory attitude needs to be slightly tempered.  The 27,060 vehicles sold in 2017 compares to 28,896 units sold the previous year.  Yes, the Tesla Model S sold 6.4% fewer units in 2017 than in 2016.

Stablemate, the Tesla Model X, had a reported 21,315 units sold.  That would seem to be a more pleasing 17% increase over their 2016 sales (18,223 units).  But this too needs to be seen in context, because 2016 wasn’t really a full year of sales for the Model X.  Volume shipments of the Model X didn’t start until March of 2016.  So a 17% increase when comparing 12 months in a second year of sales to ten months in the first year of sales is no great success story (and less than the growth in the market as a whole).

We should also point out that the Model X was not the second best seller, overall.  That accolade goes to the Chevy Bolt, with 23,297 units sold during 2017, all the more astonishing because it only went on sale in December 2016, and for much of 2017 was available in limited states.  Due to its newness, the Bolt has no comparable sales figure for 2016.  We also note that for the last three months, the Bolt was the best-selling electric vehicle in the country.

And what of the Tesla Model 3?  The good news, such as it is, 1060 cars were sold in December, which is definitely a large increase on the 345 sold in November.  But selling/delivering 1060 cars is a far cry from Tesla’s promise – made as recently as July – of producing cars at the rate of 20,000 a month in December.

It is true Tesla confessed, a month or so back, that it wouldn’t make that objective, but promised that it would be achieved by March.  However, the truth continues to evolve.  Tesla is now saying

As we continue to focus on quality and efficiency rather than simply pushing for the highest possible volume in the shortest period of time, we expect to have a slightly more gradual ramp through Q1, likely ending the quarter at a weekly rate of about 2,500 Model 3 vehicles. We intend to achieve the 5,000 per week milestone by the end of Q2.

So the 5,000 a week figure, initially promised for December, and then delayed until the first quarter of 2018, has now been delayed again until the end of the second quarter.  The markets reacted with a disinterested yawn, and after the briefest of falls in Tesla’s inexplicably high share price, it quickly recovered. 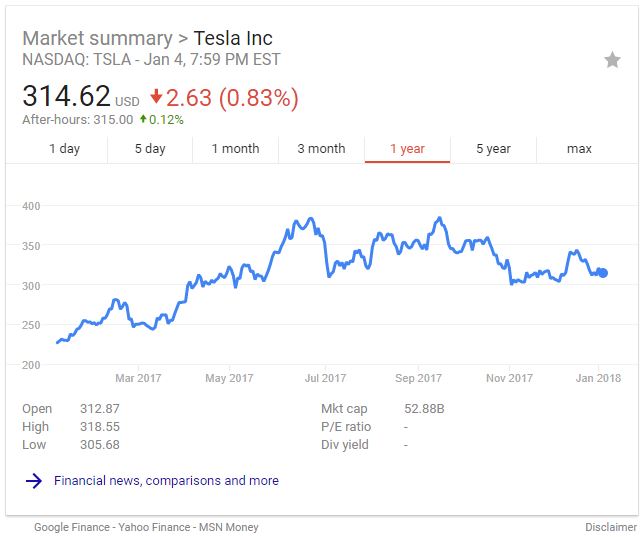 Apparently there is indeed no caring nor accountability – a company with a valuation based on future performance and massive growth is failing to display either in the levels expected, but its share price soldiers on in an alternate reality.

It is also worth restating that most other car companies – you know, the ones that sell many more cars and actually make profits, but with much lower market caps and pricing multiples – deliver their new vehicles in line with their promised timeline, and with production outputs in line with the promised levels.

Tesla in particular seems to game the numbers somewhat, with huge increases in car numbers sold in the last month of each quarter, and an even huger increase in the last month of each year, so to try and smooth that out and get a clearer perspective on sales volumes, here’s a one year moving average chart for the major electric car brands.  We don’t yet show the Model 3 on this chart, because it is still too soon to start reporting, and even the Bolt is only just now moving into its 13th month of sales. 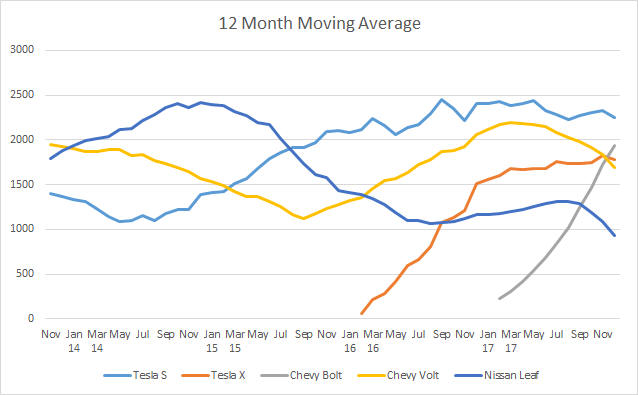 The chart shows no perceptible growth in sales volumes for the Model S in the last 18 months or more, the Model X still climbing up its curve but starting to level out, the Bolt skyrocketing upwards while probably taking away from the Volt sales in the process, and the Leaf dropping pending the new 2018 model’s release in January.

If one takes a shorter three-month moving average, while the lines are not as smooth, the trends are even clearer. 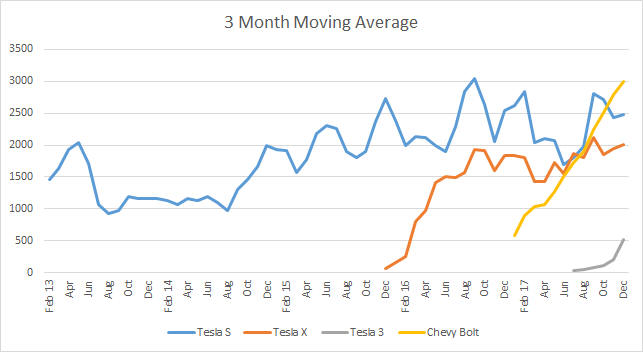 For the three-month chart, we allow the Tesla Model 3 to appear, and the trajectory of the Bolt is even more pronounced, as is its displacing both Tesla models and showing a clear position at the top of the chart.  Keep in mind when you look at either chart, Tesla tells us that within six months it will be selling 20,000 Model 3 cars a month – can you even guess at how above the top of the charts that would place it?

Would you buy the 2018 model Leaf if you knew that only some more months away was a newer model with 50% greater range?  It is becoming a bit like the early days of computers – remember when every few months brought out new computers that were faster, better, and less expensive than the ones they were replacing, and many people felt it wise to wait, and wait, and wait, until the ‘best’ computer came out.  Perhaps, with electric cars, the key thing is to identify a car that makes a sensible value-offer to you and buy it, rather than keep waiting for newer/better cars at lower prices and with longer ranges.

But, that is the theory.  The reality is a bit different.  Whether the extra range is necessary or not, it is clear that ‘serious’ electric vehicles need to offer 200+ miles of range and a price under $35,000 to get maximum market acceptance.  The extended range (but not price) was a major part of the ‘secret sauce’ that first brought Tesla’s Model S to prominence, and the combination of range and price caused the astonishing pre-release orders for its Model 3 (apparently totalling about 400,000), and also seems to be a clear factor for the Chevy Bolt’s steady progress up the sales chart.  With the 2018 Leaf, Nissan gets to compete on price but not range, and it is really only with its 2019 model that Nissan will truly get a seat at the ‘big boys’ table with both price and range.

The other thing we’ll see in 2018 is a combination of still more electric cars being released by leading manufacturers and/or the promise of electric cars appearing in the next year or two.

Our point has always been that Tesla deservedly had a ‘first mover’ advantage.  But Tesla is squandering its market leadership and as it goes from uniquely being the only company selling a good practical electric car to increasingly, one of many, it will find it harder and harder to compete on a more crowded and level playing field.  In 2015, Tesla had a 22% market share.  In 2016, with the release of the Model X, this increased to 30%, but in 2017, it dropped back down to 25%.

Tesla is correct to identify its future as revolving more around ‘normal’ cars at normal prices, hence its new Model 3.  But can Tesla successfully and profitably compete in that more price-sensitive marketplace against traditional car manufacturers who, while slow to the battery/electric technology, have demonstrated and proven their competency in efficient car production?