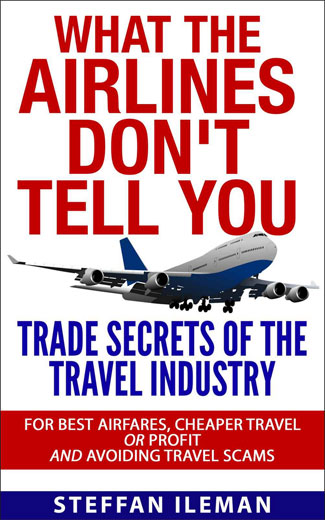 Former travel agency owner Steffan Ileman has just self-published a Kindle eBook, ‘What the Airlines Don’t Tell You :  Trade Secrets Of The Travel Industry For Best Airfares, Cheaper Travel Or Profit And Avoiding Travel Scams’.  It is available free as part of Amazon’s Kindle Unlimited

Author Ileman has an interesting background.  During his 16 years owning a travel company in Vancouver BC (1992 – 2008), he ended up ably suing British Airways for anti-competitive business practices and breach of contract in 2000, with the airline reaching a confidential settlement in 2005.  And when we say ‘he sued’ we mean that literally.  He prosecuted his case ‘pro se’ – ie on his own, without legal representation.  BA hired a big name law firm.

He seems to have developed a taste for quixotic ‘little guy against big company’ lawsuits, and tells us that he is currently a plaintiff in a class action lawsuit against Canadian cell phone companies, and has brought other actions too over the last 12 years.  Good for him.

Perhaps this book is also partial ‘revenge’ against the airlines, by attempting to expose some of their ‘revenue management’ secrets and to help people to book and buy their air travel at better rates and through better paths than the airlines would wish.  The book is short rather than long, with the equivalent of 76 regular pages.  On the other hand, if you could find even only one pearl of wisdom within its pages, it will more than pay for itself, and with a mere 76 pages to read through, it isn’t akin to needing to read the entire War and Peace in order to find your nugget of valuable information.

Much of what he writes is however is sort of general industry background and insider stories of how airlines operate, and in particular, he exposes some of the largely glossed over enmity between airlines and their travel agency ‘partners’.  We can certainly attest to the veracity of much of what he writes, based on our own agency ownership experiences, and in occasional too-frank comments from senior airline executives.

If nothing else, the most important take-away from his book is to realize that nothing the airlines do is ever for our benefit.  No matter how they might wrap their actions in a veneer of ‘for the benefit of our valued passengers’ everything they do is utterly and totally venal and for their benefit only.  Furthermore, unlike some industries which see their way to success and profit by means of win-win actions that are good for their customers as well as themselves, many of the airline actions are to the benefit of the airlines but at the cost of their passengers’ overall travel experience.

He points out the terrifying trend on the part of the airlines to introducing subjective pricing.  If you’ve not heard of subjective pricing yet, it is worth explaining it to you.  You already know, of course, that since deregulation the former very simple fare structure (full price, family rate, and perhaps one level of discount) has now exploded into possibly even dozens of different fares all applying to the exact same trip.  We also all know, and indeed have even come to accept, if we ask the person seated next to us on any plane, there’s every good chance they paid only half what we paid to travel the same journey – or perhaps, instead, we paid half what they paid.

But, to date, the price we pay has been based on fare rules and inventory availability that apply equally to everyone seeking to book a ticket.  Whether you are a prince or a pauper, if there’s a cheap seat available, you can get it.

The airlines now seek to introduce subjective pricing, where the price you pay for a ticket will be adjusted to reflect the airlines’ best guesses as to how much money you can afford to pay and are willing to pay for the ticket.  So if they think you are wealthy and can afford to pay more, they’ll only offer you a more expensive fare, even if cheaper fares are also available.

Many of us find such a concept offensive and at odds with our notions of open market fair play, but this is the latest thing the airlines are pursuing.

Ileman also points out the big con-job that many of us have fallen for, and the extraordinary situation where the airlines now have travel agencies doing the airlines’ work, for the airlines, and usually without any recompense by the airlines.  By requiring the travel agencies to now charge travelers a fee for their services, the airlines hope to shift people’s booking patterns away from travel agencies and directly to themselves – a shift made all the more deceptively tempting by the provision of online booking engines, allowing people to become their own travel agents.

But, and Ileman makes this point, these online booking services only show you what the airlines want you to see, and don’t show you all the behind the scenes extra information that is displayed on a travel agent’s computer screen.  He makes the point, strongly, that the best source of travel information is and remains a skilled travel agent.  They have the electronic tools and access to additional information about flights and fares that isn’t shown through the airline’s public websites, and can help you find the best fares and itineraries.

Ileman takes a close look at international fares.  This is an area where airlines sell both ‘normal’ priced tickets directly, and also discounted tickets through ‘consolidators’.  His point here is that the discounted consolidator type tickets usually don’t appear in any of the online booking services.  You need to find a good travel agent who knows which consolidators to call to access these restricted fares.

Consolidator type fares can save you substantial amounts on international fares, but usually don’t offer any benefit on domestic fares.

He takes a brief look at other parts of the travel industry as well.  For example, he repeats a suggestion I’ve sometimes offered myself, too, when he recommends you negotiate a discount on cruise bookings with your travel agency, on the basis that they might be getting as much as a 22% commission from your booking.  If you are booking a $10,000 cruise for two and the travel agency is getting $2200 in commission, Ileman seems to think it would be reasonable to expect that 5% – 7% of this should be rebated back to you (ie in this case, $500 – $700).

At the risk of again upsetting travel agents, I’d certainly agree with the concept, and will merely observe that I know of many agencies that will share their commission more generously than the 5% – 7% Ileman suggests you ask for.

He also seems to mildly support the concept of becoming a travel agent yourself, but that’s something we have to disagree with him about.  We’re not so sure that the benefits he describes as flowing through to travel agents (such as ‘substantial discounts on hotels between 10% to 50%’) are quite as real or common or generous as he implies.  We’ve many times been offered ‘discounts’ by hotels that actually are more expensive than some of their public-facing regular rates which even pay commission.  That’s beyond insulting, when, for example, a hotel offers us a special ‘agent rate’ of $150 a night, but at the same time are selling their rooms for $140 a night and paying a 10% commission on those regular rooms.  That makes the choice even more lopsided – a special $150 agent rate, or a $126 normal rate after commission!

Lastly, his comment about possibly being able to get a flight upgrade simply by flashing a business card when checking in for a flight.  These days with computerized inventory management systems, there are seldom/never any un-spoken for upgraded seats available for front-line airline staff to give away, and the airlines (which, as Ileman himself agrees, generally hate travel agencies and see them as convenient scapegoats rather than as partners) would much rather reward frequent fliers than travel agents.

Yes, travel agents can still get industry benefits, including everything he mentions, but these days all such benefits are no longer based on an automatic entitlement just because you printed up some business cards, but rather are earned as a result of the business you have already generated and sent to the supplier you are now asking for a discount from.

To be fair, Ileman is writing from a Canadian rather than a US perspective.  Perhaps things are still slightly more travel-agent friendly in Canada, but they surely are not in the US these days.

But, putting aside our different perspectives on whatever remaining benefits may exist in the travel industry, all in all, his book is an interesting and easy read.  Like many self-published works, it probably would benefit from a third-party editing review, but that’s a very minor quibble indeed.

So, is the book worth $5.95?  With $6 struggling to cover the cost of a cup of coffee, it is easy to give thumbs up to this book.  You might know much of it already, but it is nice to see it all set out in one place, and it makes an easy read, perhaps on your next flight.