Our September North Korea tour continues to go from strength to strength, with yet another couple deciding this literally was a once of a lifetime chance of a unique travel experience and sending in a deposit this week.

In light of the steady increase in participants, I’ve persuaded the tour operator to double the number of guides we’ll have with us.

This is going up from two to four, so even though the group size is now in the mid 30s, we’ll have lots of guides to ensure everyone gets good personal attention and lots of chances to ask questions and to hear/see the things they want on what promises to be an amazing tour.

This week has been hotel focused.  You’ll see, following and on the website, the main creative results, about how to best negotiate hotel rates.  A couple more hotel related things also :

There’s another thing that’s quietly working its way through the system as well, and it is a rather surprising story.

I regularly write about the problems Tripadvisor has with the dubious quality of its reviews, and the legal constraints that now, in the UK and possibly elsewhere too, forbid it from continuing to make its doubtful claim ‘World’s most trusted travel advice’.

When I last wrote about this, a couple of weeks ago, it had seemed that Tripadvisor was doing little to respond further to the criticisms about its reviews being sprinkled with fraudulent ratings.

I occasionally send reviews in to Tripadvisor myself, indeed, they call me one of their ‘Senior Contributors’.  I sent a review in to them about my disappointing stay at the Flamingo Hotel in Las Vegas last month, and I realized, after some time had past, that it had not been published.

I asked why not, and they said they weren’t publishing it because it failed to meet their guidelines for reviews.  I’m asking them to please explain what guideline I violated, because I thought the review to be fair, honest, reasonably well written and appropriate.  I’ve asked them twice, and have received no further response.

So clearly Tripadvisor is now censoring some reviews.  But the reviews it censors seem to be bona fide honest reviews that just happen to be negative/critical of a hotel – a slightly ironic response in light of the fact that the largest part of Tripadvisor’s credibility gap is not so much a problem with negative reviews (although that too does exist) but rather a problem with reviews that are too positive.

It is also particularly strange that they’d take a person who has contributed 30 different pieces, on all sorts of different travel products, all around the world, over the course of three years, and suddenly start censoring those reviews now.

There is nothing in my account profile and review writing history to suggest I’m anything other than a real honest person.  I’ve written reviews across the spectrum from positively enthusiastic to mildly neutral to strongly negative, the same as I do here.  There was nothing in this particular review to trigger any fraudulent activity flags either (as best I can tell).

I’m continuing to press Tripadvisor to explain their actions, and will keep you updated.  For now, it is relevant to keep in mind that for peculiar reasons, Tripadvisor is capriciously censoring the reviews it chooses to publish.

I asked readers last week what hotel amenities they rated as most important and which were least important.  I also said that if you couldn’t choose just one absolutely most (and absolutely least) important amenity from the list of 14, it was okay to pick two or even three.

Well.  Some readers ended up choosing all fourteen!  And several readers complained that free internet access wasn’t offered as a choice.  There was a reason for this.  My guess is that free internet access would probably score as the most desirable amenity of all, and by such a margin as to obliterate the relative importance of other amenities, hence I tried to level the playing field a bit by deliberately specifying internet access as something you’d pay for (although I kept the amount one would pay vague).

Here are the results 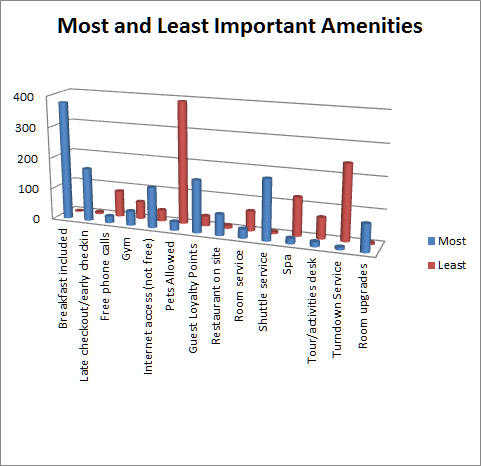 As you can see, there were five clear winners in the ‘Most Important’ category, being, in order of votes received :

The five least important amenities were

There are two more categories we could consider.  The first is what I’ll call the most controversial – amenities getting similar counts of votes for both most important and least important.

Most other amenities had a clear split one way or the other, with the next most controversial amenity being room service, and even so, room service had just over twice as many people rating it important as unimportant.

One more category could be ‘least interesting’ amenities – ones which people had no opinion on, one way or the other.  Scoring the lowest number of votes, either for or against, was an onsite restaurant, followed by a tour desk and then room service and, surprisingly, room upgrades.

The two amenities that most people expressed an opinion on were pets allowed, followed by breakfast included and then turndown service.

This has been a rather short and monothematic newsletter this week, so I’ll close with a couple of miscellaneous items.

First, anniversaries.  May I most respectfully wish a very happy anniversary to Her Majesty Queen Elizabeth the Second, by the Grace of God of the United Kingdom of Great Britain and Northern Ireland and Her other Realms and Territories Queen, Head of the Commonwealth, Defender of the Faith; who this week celebrated sixty years on the throne.

Her reign has been an extraordinary one, and she has proven herself to be an extraordinary woman, and the entire world, not just Britain, is very much the better for her ‘behind the scenes’ role in helping shape British and Commonwealth policy.

From the sublime to the ridiculous, this week also saw the fiftieth anniversary of the US’ imposition of its trade embargo with Cuba.  What good has it done to either country?  It has certainly harmed the Cuban economy and the Cuban people, but has it modified their policies in any way?  Only in a rather self fulfilling prophecy form of making the Cuban government hate us more, and thereby making our government hate Cuba more, too.

Surely it is well past time for this ill-advised embargo to be lifted.

I’m certainly not an apologist for communism, for Cuba, or for North Korea, but we need to be able to see both sides of these issues to make our own informed decisions.

Lastly, it is Valentine’s Day next week, and being as how you are a Travel Insider – better educated, better informed, and more likely to travel more often than the average person; so if you are a lady, you’ll probably already be aware of this piece of essential travel advice – advice which is apparently widely adopted among the fairer sex in the UK.