The timing of this year’s iPhone announcement is more in line with the typical September/October timings of iPod announcements, and while the iPod no longer captures the imagination of people the way the iPhone and iPad do, there was some muted thought of new iPod announcements too.

Apple duly announced new iPod products as a precursor to its main iPhone announcement, although the term ‘new’ is somewhat relative, as there was very little new to the product lineup.

After Apple’s repeated experimentation and changes in form factor for its Nano iPod, it seems to be locking in a square form factor with this year’s Nano looking the same as last year.  Apart from the unnecessary addition of multi-touch capabilities on the Nano’s tiny screen (those of us with big fat fingers will find it difficult to do too much multi-touch gesturing on its 1.5″ diagonal screen) the unit has little new, except for price.  An 8GB Nano is $129 and a 16GB Nano is $149 – these are the same capacities as last year’s models, but slightly lower pricing (previously $149 and $179).

Apple’s website continues to show the 160GB iPod Classic available, at a price of $249, unchanged since September 2009 – can you think of any other consumer electronics hardware that has remained unchanged in either features, design or price for two years?

Not only is there a growing expectation that the ‘iPod classic’ will be discontinued but the future of iPods entirely is subject to some debate.

But what about personal music players as a whole?  Do they continue to have a role as a standalone device?  Are iPods soon to disappear as a product group, being in large part subsumed into iPhones and iPads?  Will the concept of having a separate standalone device that only plays music seem as dated as the former electronic calendar and contact list type devices that morphed into the Palm range of personal organizers, which in turn got blended into phones? 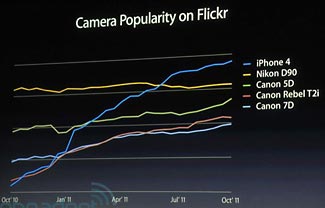 We are seeing a similar evolution with digital cameras – here’s a fascinating albeit somewhat misleading slide showing the growth of iPhone 4 pictures on Flickr.

It is misleading because the cameras the iPhone 4 is being compared to are high end cameras that definitely don’t sell in mass-market quantities (unlike the iPhone).

Nonetheless, the question is – will a smartphone become an all-in-one device that replaces both a personal music player and a digital camera?  For a growing section of the market, the answer is probably yes; particularly now that the massive sacrifice in picture quality when using a phone is no longer as substantial as before.

iPods have been a reasonably long-lived category of product by the fast evolving standards of personal electronics.  The first iPod was announced in 2001, almost exactly ten years ago, and while many other companies have tried to emulate and copy the success of the iconic iPod, none have succeeded.

There have instead been some spectacular failures, including most notably Microsoft’s failed Zune player range.  Apple continues to hold a 78% share of the personal music player marketplace, with the other 22% split among a fractured group of other companies, none having any real market presence or power.

This is all the more surprising when one considers that iPod prices are generally high.  There would be plenty of opportunity for a company to bring out a much lower priced competing product, but none have succeeded in gaining marketplace presence and traction – in large part because Apple combined (and still does, of course) both the hardware to play music on with the backend service from which to buy music – its iTunes store.

Today there are 20 million different songs available on the iTunes store, and it has had 16 billion songs downloaded over its ten year life.

That sounds like a huge number – and for sure it is.  But to put it into perspective, in the much shorter time frame of iPads (the first iPad was released in April 2010, barely 18 months ago) there have been 18 billion apps downloaded for iPads alone.  Clearly the future belongs to iPads and iPhones rather than iPods.

Although the market is no longer very ‘exciting’ for iPods, there seems to still be some life in it.  Almost half of all iPod sales go to first time buyers of an iPod, and in the last year, 45 million iPods were sold.  So it seems clear that iPods – or at least some iPods – will be around for another year or two yet, but it also seems clear, based on the very lack-luster product ‘enhancements’ announced this year that Apple is no longer viewing the iPod as a strategic vehicle for future growth, but instead (in marketing terms as well as probably almost literally too) as a ‘cash cow’ to be milked for as much profit as possible in a market that is likely to first stabilize and then inevitably decline and be replaced by smartphone sales.

This seems increasingly the case – this year the iPod announcements weren’t even considered important enough to have their own release event, instead they were thrown in to the iPhone announcement as a sort of after-thought.

One Remaining Benefit of an iPod?

There is still one thing we use an iPod for, but even that has alternatives available to us now.  Until recently we would always travel with an iPod Classic to listen to music while on a long journey.  Sure, in theory we could use our iPhone or iPad or whatever else to do this too, but we wanted to conserve the battery life in the iPhone – there’s nothing worse than getting off the plane in a foreign country only to find your phone’s battery is almost dead.

And so the iPod Classic gave us an extraordinary up to 36 hours of battery life for listening to music – more than enough for any travel itinerary – without impacting on the batteries in our other devices.  An iPod Touch gives an even better potential 40 hours.

But new devices such as the very clever Third Rail System

give a great new way of extending the battery life of an iPhone, and at much less cost than an iPod, and also taking up less space and weight in our carry-on bag.

If you don’t already have an iPod, maybe there’s no longer a reason to buy one.  And if you do have one, there’s even less need to rush off to buy a new one.