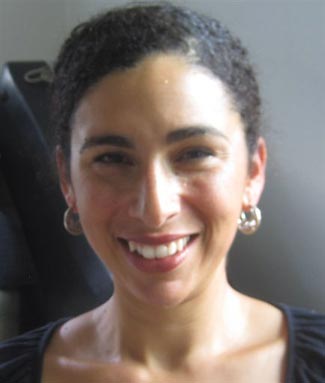 So there you are, sitting quietly in your seat on a flight, doing nothing wrong – indeed, doing nothing at all except counting down the hours and minutes until your flight from Denver arrives in Detroit.  You are an attractive mother of  twins and live a middle class life with your physician husband in Toledo, OH.  Your picture illustrates this article.

The two other passengers in your row are doing nothing wrong either.  One of them apparently has some sort of stomach upset and so spends more time in the plane’s toilet than is normal.  The other passenger also goes to the toilet once or maybe twice, at times when the first passenger was in the toilet, taking advantage of the easy access to the aisle – hardly a unique occurrence, indeed, it is common and considerate to get up at the same time to go to the toilet to minimize the hassle for the other people in your row.  The other two passengers, male, are coincidentally both Indians but don’t know each other.

The flight proceeds normally and lands in Detroit – perhaps you didn’t notice that for the latter part of the flight, it was being ‘escorted’ by two F-16 fighter jets, ready to blast you out of the sky at a minute’s notice.  The plane then taxied to the gate, but the passenger bridge did not come out, and after a while, the plane backed out again and taxied on to a far away location, where nothing happened for almost 30 minutes, while being surrounded by police.

All passengers are told to stay seated and remain still, and to put their hands on the top of the seat back in front of them and keep their heads down.  Heavily armed police board the plane, come to your row, handcuff you, and haul you and the two men in the same row off to airport holding cells.  You are left in a cell – still handcuffed – and with a filthy toilet that has a video camera trained on it, should you decide to use it, for some hours.  You are questioned, strip searched, fingerprinted and detained for four hours by a variety of airport police, TSA security officers and FBI agents.  The other 113 passengers watch your departure then are taken off the plane, still at the remote location, and eventually transported to the terminal and also questioned for two hours, while all luggage is sniffed by dogs.

Your crime?  Sitting next to two men who spent – it is alleged – unusually long periods of time in the toilet (not together, but separately).

Oh – and get this :  After eventually releasing the woman, the FBI now claim she was never arrested!  If being handcuffed, locked up, strip searched, finger printed, and questioned for four hours is not being arrested, what is it?

One more quotable quote :  Detroit’s Airport Authority unrepentantly said their response wasn’t unusual.  ‘Regardless of why it was triggered, whenever we get a radio call of a security problem on board, our response is the same one we would have had yesterday, tomorrow.  We always react as if it’s the end of the world.  If it isn’t, so be it.’

Do you think the lady who was ‘not arrested’ and ‘treated with respect and dignity’ would agree with the appropriateness of the airport’s response to her sitting quietly and minding her own business on a flight, while two people she was not connected with in any respect occasionally went to the toilet, violating no rules in the process?

What part of the ‘innocent until proven guilty’ and Fourth Amendment was fairly followed in this appalling reaction to a non-event?  The FBI said ‘The public would rather us err on the side of caution than not’.

More details here, here and here.  And here is the original blog entry by Shoshana Hebshi (the lady who was ‘not’ arrested).