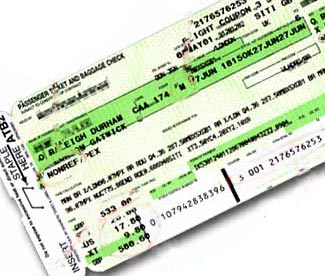 Here’s a tip that might possibly save you 10% or more on any domestic airline tickets you choose to buy.

I’ve decided to send this out as a special newsletter due to its probably short lived nature, and its broad applicability to many of us.

As mentioned in Friday’s newsletter, the FAA is being held hostage to a political dispute (quite separate to the broader government funding dispute) and so on Friday it had to suspend many services due to its statutory operating authority expiring.

Now – here’s the interesting thing.  Also expired is the FAA’s ability to levy taxes on tickets (and the ability of airlines to collect taxes on the FAA’s behalf).  So, and as also explained in Friday’s newsletter, most of the government taxes on tickets are not being collected at present.

If you buy an airline ticket at present, you could stand to save a substantial amount.  The 7.5% ticket tax on domestic flights (tax code US on a ticket) and the $3.70 per flight fee (code ZP) are both not currently being collected.  If your travels take you out of the country, you will save the $16.30 international arrival/departure tax that replaces the 7.5% domestic tax, or the $8.20 departure tax for flights between AS/HI and the mainland US (also a US code).

Other taxes such as the per segment security surcharges and Passenger Facility Charges are collected under different authorities and remain in effect, as are all the other international travel related charges.

There’s no way of knowing both when the FAA will be re-authorized to recommence its normal operations (but this will probably be sooner rather than later) so if you know you’re going to need to buy tickets at some stage in the next month or two or three, maybe it makes sense to buy them urgently quickly – assuming you can find the flights and fare you want.

Now – here’s the thing.  I don’t know what will happen when the FAA gets back to normal.  Will it try to back-collect the taxes unpaid on tickets purchased while it was in suspended animation?  Does it even have the legal right to do so?  The answer to both questions is ‘maybe yes, maybe no’.  But the worst case scenario, for you, is simply that you end up paying what you would have paid anyway, and there’s a measurable chance that you might end up saving yourself something like 10% or more on the total amount you’d otherwise pay for travel you need to buy sometime soon anyway.

So go ahead and enjoy a taste of the benefits of a little less government in your life.  And enjoy it while it lasts.