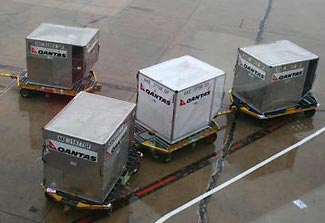 Qantas recently commenced service with 747s flying from Sydney to Dallas, and then back to Brisbane (the route back to Sydney was too far due to more head winds going south-west than coming north-east).  This is apparently the longest 747 route in the world.

Unfortunately, it is not only the longest route, but perhaps there are reasons why other airlines don't also offer similar length journeys with a 747.  At the best of times, Qantas has to fly their planes only partially full, because the 747s don't carry enough fuel to operate the journey safely with a full payload of passengers and cargo.  If the forecast is for weak tail winds and/or stronger than normal head winds, the airline has to reduce its load even more.

And therein lies a nasty problem.  If on the day of flight, it seems the weather conditions are not favorable, requiring the airline to reduce the total weight of passengers, bags, and cargo it carries, what can it do?  Should it offload some passengers, or allow the passengers to travel, but offload their bags?

Earlier this week, Qantas chose to fly the passengers but left three containers of passenger bags behind, only telling the passengers about their missing bags upon arriving in Brisbane.  The bags took another 24 hours to get there.

The extreme limit of endurance that Qantas is pushing with these flights also may have contributed to Qantas needing to divert a flight away from Dallas to Houston this week, perhaps because the plane didn't have enough extra fuel to loiter above Dallas while waiting/hoping for tornado issues to clear.

However, there is another option in addition to the offloading passengers and bags – possibly two other options – that Qantas is not considering when it claims it had no choice but to offload bags.

And included in this article is the suggestion that Qantas should stop 'sailing so close to the wind' – it needs to allow itself more of a safety margin in the number of seats it blocks out, rather than continue risking its ability to then fly the passengers and their luggage that is has accepted bookings from.