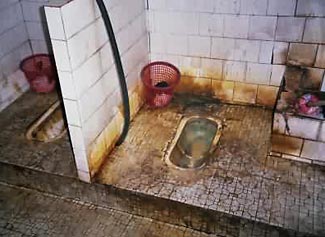 An occasional downside to travel is our increased susceptibility to 'Traveler's Tummy', or any of half a dozen other terms all used to refer to the unfortunate situation of an upset stomach and diarrhea.

As you probably know, this can destroy a day or more of a vacation, and if it occurs on a day when you're scheduled to be traveling, it becomes utterly miserable.  If nothing else, be sure to always travel with Immodium or Pepto-Bismol.

Sometimes an attack of diarrhea is no-one's fault – it is just due to a different mix of bacteria in food to that which we have grown accustomed to in our local area.  People who live where we are visiting can safely eat the food, but until we adjust, the food may upset our stomach.  On the other hand, sometimes we truly are suffering from bona fide food poisoning.

A recent survey in Britain found that 'up to' 60% of travelers experience diarrhea abroad.  And so, on the basis of 'forewarned is forearmed', there's now a new website with the unambiguous name www.traveltrots.co.uk that allows you to click on your intended destinations and see what percentage of people have reported experiencing, ummm, the 'chocolate faucet'.  The nicely done website also has some scary pictures of what it claims to be some of the world's worst toilets.

I don't doubt the validity of the claims for being among the world's worst toilets, but there is some suspect data on the map though – while 70% of people report a 'diarrhea disaster' in India, 0% report a disaster in Bangladesh?  (Note – these numbers seem to change from time to time based on new reports being added, so you might see different numbers when you click.)

Perhaps this explains some anomalies elsewhere – for example, 12% of travelers to the US end up with a problem (the same as in Russia), compared to only 7% in Canada.  On the other hand, as a New Zealander, I take smug pride in noticing NZ's 3% score, contrasting with Australia's 15% score.