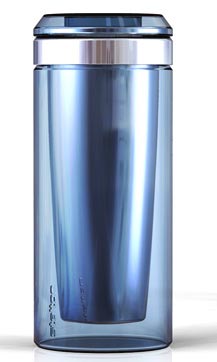 Welcome to 2011 and the hope and promise of the year that lies ahead.

So far, the year is off to a good start, with no terrorist acts over the Christmas/New Year period, although the TSA did start to get a bit anxious about Thermos type vacuum flasks just before Christmas.

As you probably know (and as you can see in this illustration), these devices are double-walled.  In theory there is a near vacuum between the inner and outer walls, which helps to insulate the contents and keep it either hot or cold.  One would guess by the TSA's new worry about such devices that a terrorist has been considering filling the gap between the inner and outer layers with explosive – and you could get several pounds of explosive in the gap between the two containers in a quart sized Thermos.  Furthermore, a combination of metal construction and even density for the explosive concealed within would make this close to completely undetectable by most normal TSA procedures.

If you're like me, the new year is often a time when you not only make resolutions but also start making plans for your traveling in the year that follows, and with that in mind, may I introduce you to the main Travel Insider tour options for 2011.

To talk some more about these last two items, I'd like to publicly thank our 2010 Scotland tour member Jeanette for very kindly allowing me to publish her daily diary of last year's tour.  This is a detailed and interesting view of the tour through the eyes of one of the participants – it isn't any hype from me, and neither is it a selective telling of the truth.  It is exactly as she experienced and wrote about it, with no changes by me to her fascinating narrative.

And as regards Front Sight, the last few days of the lifetime membership deal saw the number of Travel Insider purchased memberships swell from 29 to 52.  Wow.  In addition to this, I have a small inventory of extra memberships which I purchased 'on spec' myself, should you wish to reconsider.

I also have access to a few $150 Four Day Defensive Handgun course certificates, making it a great value for you to attend our Travel Insider training in April (or any other midweek course before or after).

Talking about Vegas, the annual Consumer Electronic Show is currently underway in Las Vegas.  I'm not attending this year – the 140,000 or so people who do attend strain every part of Las Vegas, the Convention Center, transportation, hotels. and the airport to the limit, making the whole city a struggle to visit; and the show itself has become so huge as to be impossible to cover completely.

But reports from the show floor tell me that the big thing this year is – and no surprise here – tablets, with just about everyone announcing new tablet devices.  But although many companies are announcing new tablets, many of them are holding back on releasing them until a new version of Google's Android OS comes out later this year (expected to be at least announced if not available sometime in February) – version 2.4 or as it is known, 'Honeycomb'.  This new version (the current version, 2.3, was released just recently) is better designed to provide added functionality for larger screened tablet type devices and to take advantage of the more powerful processors that will be driving them.

So in a way Apple continues to have the tablet/iPad market largely to itself.  As is common, Apple itself is not deigning to participate at CES, but will be having its own exclusively Apple get-together later this month.  They seem to think they are too special to participate in the industry event that all their competitors are eagerly attending.

However, when Honeycomb and tablets running on Honeycomb start to appear in/after the second quarter of the year, look for the iPad's market share to start plunging downward.  And talking about Apple market shares, read on down to the interesting analysis of how it is that Apple's share of the smartphone market remains constant while Android's share continues to grow in leaps and bounds.

Our Scotland's Islands and Highlands Tour includes one of the great railway journeys of the world – the Jacobite steam train ride between Fort William and Mallaig, as featured in the Harry Potter movies (in particular the beautiful arches of the Glenfinnan viaduct.

One journey that doesn't appear as often as it should on such lists is Canada's Via Rail 'Canadian' train that travels for three and a half days between Toronto and Vancouver, through the Rockies.  A discounted one-way fare for two people in a sleeper compartment, including meals, comes to about $2000 (in total for both people).  That's a good value, and the experience is scheduled to get even better with a $20 million refurbishment of Via Rail's sleeping, dining and dome cars.  Another $98 million is being spent on other Via Rail services.

Lastly in this part of the week's newsletter, I wrote at length last week about the new very high stakes battle that has commenced between Airbus and Boeing for a successor to their A320 and 737 families of planes.  Another week has passed, and still no response from Boeing to the Airbus announcement, now over a month ago.  Is everyone on an extended Christmas holiday at Boeing?

But, for all its faults, Boeing really does have the assembly of the 737s down to a fine art, and as a wonderful example of this, here is a sped-up time-lapse video of the assembly of a single 737.