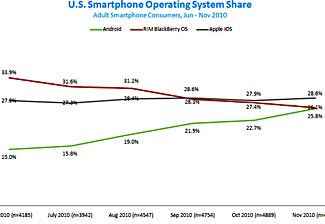 Looking at the chart depicted here (and more clearly visible full size on Nielsen’s website) one thing seems surprising clear – Apple’s market share has been remaining more or less steady, and it could be argued that Android’s extraordinary growth is all coming at the cost of poor old Blackberry.

Blackberry’s continuing loss of market share is even more apparent when you look at monthly new sales instead of the evolving established user base (also charted in the Nielsen article).

Android phones have been outselling Apple iPhones since before the chart series begins in June 2010, and Blackberry has been the lowest of the ‘big three’ since July.  In November 2010, Blackberry’s market share was a mere 19.2%, compared to 26.9% to Apple and a massive 40.8% to Android.  This leaves 13.1% of the market to be shared between various Windows Phone 7 devices, Palm devices, and Nokia devices.

Microsoft’s Windows Phone 7 was released in the US and Canada on 8 November, so it is too soon to tell from November figures if it has had a measurable impact on the market.  But it is interesting to track the total ‘other’ category of phone sales :

This shows no apparent impact in November for Windows Phone 7 sales at all – indeed, there were fewer ‘other’ category sales in November than any preceding month.