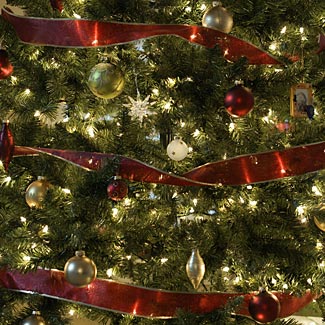 'Twas the night before the night before Christmas, and all through the house,
The only creature stirring, was my computer mouse.
The stockings were hung by the chimney with care,
In hopes my fundraising might bring needed cash there.
My daughter was nestled, all snug in her bed,
While visions of ….. well, you get the idea.

In case you hadn't realized, Christmas is almost upon us once more, and unlike the announcer on NPR, I'm not apologizing to anyone for directly labeling it as the Christian celebration, Christmas, that it is.  Merry Christmas, everyone, and long may we feel able to greet each other this way and pass Christmas wishes on to friends, family, loved ones, and strangers too.

What an awful week it has been for travelers.  But the weather problems domestically, here in the US, have been dwarfed by the nightmare experiences in Europe, most particularly at Heathrow, where over half a million passengers had their travels gratuitously disrupted by incompetent bungling of a scale perhaps not previously seen, ever before.  A mere four inches of snow on Saturday, followed by a series of clear days, saw the airport closed pretty much solidly for Saturday, Sunday, and Monday, with two thirds of flights cancelled on Tuesday, and about one third still cancelled on Wednesday.

Gatwick airport, on the other hand (close enough to Heathrow as to experience almost identical weather) closed for a mere 5 hours on Saturday, and on Tuesday, while Heathrow was struggling to operate one third its normal schedule of flights, Gatwick sent off 115% of a normal day's set of flights, to try and help out as best it could.

I write about this in more detail below, an article that was cited approvingly on The Christian Science Monitor, amongst other reposts, and there are some excellent comments appended to the post as well.

For once I find myself sympathetic to the airlines.  None of the debacle at Heathrow was their fault.  Indeed, they even offered to help the Heathrow airport staff with snow removal, but Heathrow's management refused to allow the airlines to help.  The government also offered to send in troops to help, but Heathrow inexplicably refused that assistance also.

In Europe airlines are required by EU directive to pay compensation to passengers inconvenienced by delays and cancellations.  The debacle at Heathrow suggests that airports should be liable too.

There are two interesting items about airplanes (as opposed to airlines) below.

Earlier in the week I had the sorry duty to update you all on the latest problems and further delays to Boeing's already three year delayed 787 project.  Adding insult to injury, Boeing is now delaying announcing the details of the latest delay (how crazy is that!).

I've been sitting impatiently on a growing story since 1 December (you'll find out why the delay in the article series), and decided to publish it now so you have something meaty to enjoy over your Christmas break.  This is the story of what may be the latest unexpected twist and turn in the airplane building industry.

One of the things that struck me, when writing about the 75th birthday of the DC-3 last week, was how the Douglas Aircraft Company went from its position as the unassailable leader of the commercial airplane building industry to being merged and then bought out and ultimately disappearing entirely, while a struggling little company suffering from no successes of note in its two decades of existence at the time of the DC-3 came from nowhere to in term dominate the airplane building industry – I refer of course to Boeing.

In recent times Boeing has had its leadership position challenged by Airbus, but never convincingly overturned (my earlier article series on 'Where is Boeing Going' chronicles the rise and sort of fall of Boeing through to the mid 2000s).  Until now.

So what is up now, and why is it important?  That's the meaty Christmas break reading I've prepared for you in a new four part series 'Airbus Fires the First Shot in the New A320/737 War with Boeing' – described and linked in one of the following items in today's newsletter compilation.

There's one more item of note this week.  An extremely valuable Christmas gift for perhaps a few of you, and an irritant for others of you (sorry).  Scroll on down to read about how you can get a Front Sight Firearms Training Institute Life Membership for pennies on the dollar – for much less than you'd pay for a single training course.

And, if this might be of interest, you can use your new Life Membership to pay for you to attend the Travel Insider Four Day Defensive Handgun course that I'm coordinating next 4-7 April.

So – what else?  Come back next week for the last newsletter of 2010, or if you get the daily or real time updates, stay tuned during the Christmas week for whatever comes your way.

And so, until next week, please enjoy safe travels and be untroubled by any weather that might be out there.  And enjoy a very merry Christmas.