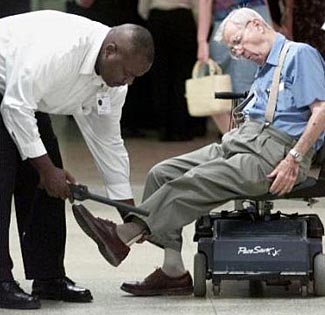 Okay, so an article headed ‘The Limitations of the TSA’ might seem to lack anything original or creative, but I hope when you read the full article on the website, you’ll find it to actually be both original and creative.

Did you know that whereas the TSA have 50,000 front line personnel to protect primarily our airports, the FBI have only a few thousand special agents on counter terrorism duties to protect the entire balance of our country?

No wonder the TSA seeks to classify such appalling results as national security secrets!

But the biggest problem with the TSA is that it is defending yesterday’s targets (planes) against yesterday’s threats (first box cutters, then shoe bombs, then liquids, then crotch bombs).  The TSA can not defend against future threats it has not thought of, and it can not defend other parts of our country against terrorist threats.

Alarmingly, terrorists are starting to show interest in new forms of attack against other parts of our country (there have been three examples of this in the last year).

So should we really be allocating so much resource to such a small part of the nation’s security, and allocating so little to everything else?

The answer to this rhetorical question is probably obvious, but only to you and me; alas not to our political lords and masters.  Read the full article on ‘The Limitations of the TSA :  Protecting Yesterday's Targets against Yesterday's Threats’ for more on this important issue.