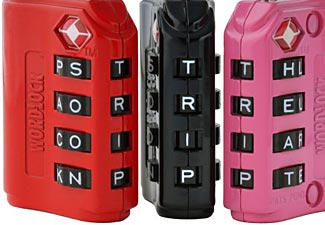 There is a third choice as well – a combination type lock with letters rather than digits on the wheels.  The reasoning behind this is that you can choose an easily remembered word rather than a number.

A factor in designing a combination lock with letters rather than digits is that you probably can’t get all 26 letters of the alphabet on each wheel, so there is some skill and science in selecting a mix of letters that allows for the widest variety of ‘real’ words to be formed.

Of course, the downside to being able to spell real words might possibly be a temptation to use an ‘obvious’ word as your combination, but on the other hand, this weakness is probably more illusory than real, unless you choose something like ‘secret’ as your combination.

One such lettered combination lock is the ‘Word Lock’ TSA approved luggage lock.  This is a small lock with four wheels, each having ten letters on it.  The lock comes with some sample settings already shown – the words being PACK, SOON, TRIP, and the less thematic words HEAT and LURE, all visible on the wheels at different parts of the lock.

With four wheels, each having ten letters, there are 10,000 different combinations available for you to choose from, but if you want to choose a real word rather than a jumble of letters, your choices reduces somewhat.  That’s not to say you should choose only a real word – it is entirely up to you whether you select, eg, ROAD or RRNS.  And if you have a favorite four letter word, there’s no guarantee you’ll be able to make it on the letters available to you (there is no ‘F’ on the first wheel, for example!).

You can change the code (which comes default as PACK) via a slightly complex process that you’ll never remember.  There is a miniature sheet of instructions, and in the likely event you lose this sooner or later, you can visit their website and download a PDF with the relevant instructions.

The locks are TSA approved, and have a master key slot as well which allows the TSA to use a master key to open the lock if they wish to open and inspect the contents of your suitcase.  When the new generation of TSA approved padlocks first appeared, it seemed that, as often as not, they would be cut off the suitcase by TSA employees who were too lazy or too ignorant to understand they could unlock them with the master keys they had on hand.  But over the years, it seems they are now better at unlocking rather than destroying such locks, which are always prominently marked with the TSA approval logo on them.

The luggage locks are fairly flimsy in design, but when you think that anyone can use a pen to open a suitcase zipper (or simply walk away with your bag altogether!), the purpose of a lock is more to prevent accidental opening than to give any type of security to the bag and its contents.

Wordlock make a range of different locks, including bike locks and generic padlocks, with most of the other locks being heavier duty and some with five rather than four wheels, making for up to 100,000 combinations (not all being real words, of course).  All have a generous limited lifetime warranty.

.  Great as a stocking stuffer this Christmas.