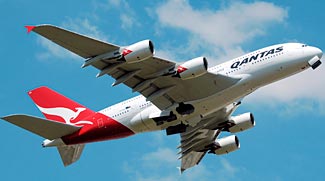 From time to time some critics have wondered out loud if very-profitable Qantas might not be slightly lowering its one-time impeccably high safety standards as part of its relentless drive to greater efficiencies and profits.  Qantas planes have occasionally suffered mishaps of one sort or another, and due to Qantas' unique safety record, prominently attested to in Rainman and elsewhere, any such minor problem gets much greater coverage than it would with any other airline, particularly in Australia where it is part of the popular culture to criticize its local airline whenever the opportunity arises.

Things started when one of its A380s suffered a serious uncontained engine failure shortly after departing from Singapore on Thursday 4 November.  Rather than press on to Australia with the three remaining engines, the captain chose to prudently return immediately back to Singapore.

Some commentators were quick to accuse Qantas of poor maintenance, suggesting it was bad maintenance that caused the potentially-disastrous engine explosion.

Qantas then took the unusual step of grounding its entire fleet of six A380 planes.  As of the time of writing (18 November – two weeks later) they remain grounded.

It subsequently was revealed by Qantas, and confirmed by Airbus and Rolls Royce that the problem with the engine was nothing to do with maintenance at all, but rather appears to be an underlying design problem with the engine (a Rolls Royce Trent 900 engine – a new type of jet engine designed specifically for the A380 by Rolls Royce), and therefore something that may occur with all the Trent 900 engines on any/all A380s, no matter who operates them or how they are maintained.

Qantas followed up their earlier determination of a design flaw with the discovery of additional issues/problems with the engines several days after grounding the fleet.

Singapore Airlines briefly grounded its 11 A380s (which have the same Rolls Royce Trent 900 engines) for less than a day before saying that it considered all their engines to be acceptable.  Five days later it said it had found issues on three of its planes and was grounding them until the engines were repaired/replaced.  Its other eight planes continue operating.

Lufthansa, the only other airline to operate Rolls Royce Trent 900 powered A380s (the other airlines with A380s are powered by Engine Alliance engines instead) never grounded its three planes, although on 10 November it said it would be replacing one of the engines on its first A380 in what it termed a precautionary move, and on 17 November said it would be replacing a second engine too.

In latest breaking news, it now seems that Rolls Royce itself may have identified some weaknesses in the engine design and improved engines that were manufactured more recently, but without notifying the airlines operating planes powered by the earlier built engines – a rather dismaying lack of communication.  And it now seems that there may be 40 engines affected by these problems, with Rolls Royce apparently now agreeing to completely replace all affected engines.

To put this engine problem into context, we are not just talking about a benign 'contained' engine failure where something happens that causes the engine to simply and calmly lose power and stop operating (sort of like what happens if your car's engine has an electrical or fuel problem).  We are talking about a worst case scenario 'uncontained' failure where something fails, causing parts of the engine to fly out of the engine, potentially then damaging the airplane (think of what happens if a piston breaks through the side of your car's engine block).

Indeed, in the case of the Qantas failure, the plane's wing was damaged and so were some of the control systems inside the wing such that it was not possible for the other engine on that wing to subsequently be turned off once the plane had landed.  Any further engine explosions might also be 'lucky' and cause only moderate sustainable damage, or they could be unlucky and cause the massive A380 with perhaps 500 people on board to fatally crash.

Any time there's a risk of an uncontained engine failure, the airline needs to be extremely careful.

So – let's compare airlines and actions after the engine explosion on the Qantas A380.

Qantas grounded its entire fleet and has kept it grounded ever since, at enormous commercial cost – and also, extremely unfairly – causing some ill-informed people to see Qantas as having problems.  Qantas does not have problems, it is merely more cautious and insists on higher standards of performance/reliability.

Singapore grounded its fleet for a brief day, then resumed flying, then five days later took three planes out of service, and now it seems that some of its other planes also have engine issues too (based on Rolls Royce apparently replacing 24 of their engines at SQ).

So which airline do you think puts safety first, even though it both presented as a major financial cost and also caused very unfair damage to its reputation for safety?

And how would you feel about flying on a SQ or LH A380 at present with as yet unreplaced Trent 900 engines?

Qantas deserves a massive vote of thanks from all of us for setting the industry such a sterling example of putting safety first, no matter what the cost or consequences.  Bravo.