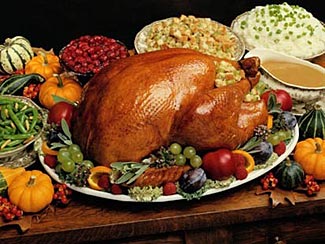 I hope your Thursday Thanksgiving involved an appropriate (or, even an inappropriate) amount of (over)indulgence, and that today sees you warm and comfortable, and hopefully not at work.

I was surprised to see that while just about every store and every food outlet of any kind was closed on Thursday, Starbucks was resolutely open – and enjoying a steady stream of customers, too.  I'm not sure if that was just a Seattle thing (we do like our coffee here) or applicable everywhere.

You're probably not wanting a full slate of travel and technology commentary today (and in truth I'm not wanting to write a huge newsletter on Thursday either!), so I'll try and keep it reasonably short.

But there is still a lot of good material, including a very extensive four part review of Cathay Pacific's business class (see below).

I write some material that offers no surprises in the writing process.  For example, the Cathay Pacific piece was an easy and unsurprising project – I had pages of notes, I knew what I wanted to say, and the only remaining step was getting it written in cogent form.

But other material 'writes itself' and ends up in a totally different form to what I'd planned it would be, when first starting the assignment.  An example of that is my piece about finding hidden explosives.  It started off as another article lambasting the TSA for their new intrusive security measures, the same as hundreds of other articles written by just about every other commentator.

Then I rewrote it, and this time it had as a theme 'okay, so it is a nasty process, but it is also necessary, because without this, terrorists could sneak bombs onto planes'.

However, unexpected or not, it is an important article, and happily not too extremely long or complicated.  Please do click the link in the 'teaser' description of it which follows a bit further down the newsletter, and please do think about the issues the item uncovers and discusses.  Most of all, if you have an answer to my closing questions, please share your answers with the rest of us.  And, if you don't have answers, please ask the same questions of your elected representatives.

Talking about security measures, I've been asked when the next Travel Insider hosted Four Day Defensive Handgun Course will be.  I'd earlier promised 'about March 2010' and I've now chosen the four days from Monday 4 April through Thursday 7 April – you'll need to get to the Las Vegas/Pahrump area probably on the Sunday night, and can leave either Thursday night or Friday (or any time subsequently).  There is a short term $195 special deal on this course at present available from Front Sight.

Here's what you need to know :

General information about Front Sight and the Four Day Defensive Handgun course, based on my two previous attendances.  Also part of that series are tips on what to bring, where to stay, what to expect, and so on.  Plus, of course, if you have other questions, simply ask me and I'll do my best to answer.

Front Sight's own website is here, and when you're ready, here's a link to buy one of their on-sale discounted certificates for the course.  You might want to consider buying two or three – they can be used for any of the mid-week four day courses, they have no expiration, and you can transfer them into anyone else's name.  I'm not sure how long they'll stay available for, so grab some while they're there.

Without exception, other Travel Insiders have spoken very highly of their experiences taking these courses.  Some are people who have already had a lot of other firearms training, throughout the country; others are people who are surprising themselves by going to their first ever course, and then there are all sorts of people inbetween.  But the consistent thing is that everyone finds it an invaluable learning experience, and tremendously good fun, too.

I've already got one person choosing to come for the second time, and there's a good chance at least one other of our group in October will also come again in April.

Please let me know if you'll choose to come too – either alone, or with a spouse, friends, children, or whoever else.  All are welcome.  With this being my third time taking this course in less than a year, I'm not sure I'll choose to go back and do it a fourth time, so if you've been thinking about doing it, please do choose to take advantage of this opportunity to share the experience with other Travel Insiders.  It is a reasonably good time of year – not too hot and not too cold, and the $195 deal is a great bargain on something that normally lists for very much more.  (If you have any other Front Sight course certificates, they can probably be used for this course too.)

If you're coming from Canada, or any another country, that's an option too.  Front Sight will rent or sell you everything you need.

Same as last time, you can optionally choose to go spend the Thursday night (7 April) at the Silverton Hotel close to Las Vegas Airport, on the Pahrump side of town, and enjoy a lovely and relaxing celebratory meal as a way of concluding the four day experience, and also same as last time, I look forward to meeting many of you for a dinner and pre-course briefing session in Pahrump on the Sunday evening, 3 April.

There's been continued bad news for Boeing over the last week, and while they're still slow to admit this themselves, it appears certain that the delivery date for the new 787 will slip again, perhaps by as much as 3 – 6 months, as a result of the wiring fire experienced by one of the test planes.

This will be the seventh delay to the 787's delivery schedule, which will now be more than three years late getting into the hands of the airlines.  More details in a perhaps slightly overly pessimistic article here.

I'm from the government and I'm here to help you, part 1 :  Some utterly outrageous nonsense came from the Canadian government in their attempt to justify the unjustifiable – their protective approach to Air Canada and their refusal to grant Emirates and Etihad extra flights to Canada.  As this article reports, Canada's Government House Leader John Baird claimed that tens of thousands of jobs would be at risk if these extra flights were approved.

This is utter nonsense.  While it is quite likely that Canadians would prefer to enjoy the superior service offered by Emirates and Etihad if they had the freedom of choice, let's put this tens of thousands of lost jobs claim in perspective.  Air Canada employs about 22,000 full time equivalent staff.  If we assume that 'tens of thousands' means perhaps 20,000, then this claim suggests that Air Canada would shrink from 22,000 down to 2,000; one tenth its current size, all because of another dozen or two flights a week by Emirates/Etihad (Air Canada currently operates about 10,000 flights a week).

There's more.  Don't you think these new flights to/from Canada might also add some extra Canadian jobs – more counter staff, more ground handlers, more reservations/call center staff, and so on, for the two airlines?  And don't you think that more competition might actually increase the total number of people flying to/from Canada – and possibly even increasing the number of inbound tourists to Canada from other countries?

This claim is so wrong as to be a caricature of a claim.  Sadly, the Canadian government, in continuing to refuse the reasonable requests of Emirates and Etihad, seems to believe it, and in doing so, is more likely than not both depriving the Canadian people of the benefits of competition and the wonderful service offered by these two fine airlines, but also is curtailing a potential boost in inbound tourism.

I'm from the government and I'm here to help you, part 2 :  The Brazilian government has reached an agreement with its airlines forbidding them from overbooking flights over the holiday season.  This is allegedly a passenger friendly move.

While we can all understand the hassle of being bumped off a flight, does the government also realize two other things?  First, every flight has some no-show passengers.  If an airline doesn't accept overbookings, it will end up not carrying as many people, confirmed, as truly want to and choose to fly.  Planes will go out with empty seats, while people who wanted to travel will be refused bookings.

Second, if an airline can only sell, eg, 100 seats on a 100 seater plane, instead of overbooking and selling, eg, 135 seats on that 100 seater plane, it will have to sell each of its 100 tickets for a higher price so as to earn the same amount of money from the flight.  The average passenger will end up paying more for their ticket.

Properly done, overbooking walks a careful knife-edge that allows the airlines to accept as many bookings as possible, to get as many people on the plane as possible, and to accept a lower average fare per booking than they could do if not overbooking.

Overbooking is good, not bad.

Well, that's it for this Thanksgiving issue of your Travel Insider newsletter.  I head to Europe on Monday, preparatory to this year's Christmas Markets Cruise along the Rhine, starting in Basel on Friday.  So there's unlikely to be a lot of news from me for the next week or two – I return on Friday 10 Dec and normal service will resume immediately thereafter.