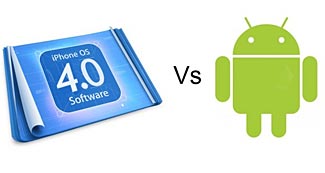 The rapidly evolving marketplace for smartphones – a market re-invented by Apple with its release of the first iPhone in 2007 – now has at least seven different platforms/operating systems from which to choose.

Apple definitely reigned supreme and unchallenged for a while, and the release of Android's first phone in late 2008 showed little that would displace Apple from its position as king of the roost.  But since the first Android phone and the first version of its OS, both the hardware and the OS have developed at an astonishing rate and both the hardware and software may now be better than that offered by Apple.  The level of marketplace acceptance has grown to reflect this.

Although Apple still has a much greater installed base of phones, Android phones are now substantially outselling iPhones every month, and the rate of market share capture by Android shows no signs of slowing down.

However, it isn't just a two horse race.  Last month Microsoft released a totally redesigned smartphone operating system, as did Blackberry a month or so earlier; indeed, Blackberry sort of has two different operating systems, and – not to be outdone – (and not withstanding its almost total non-presence in the US) Nokia might even have three different smartphone platforms at present.  Various other options are also available.

Whatever you choose for your new smartphone now will probably, to a greater or lesser extent, lock you into the OS platform well into the future, due to your investment in related software, music and video files that will work only on the OS platform you choose, not on competitors.

But does it really matter which OS choice you make?  These days, are there really any meaningful differences between the latest Android phone and iPhone?  And, if there are differences, which should you choose?

For the answers to all these – and many more – questions, look no further than our latest encyclopaedic special report, 'Should You Buy an Android or iPhone'.  Sprawling over seven long webpages, this 12,000 word review leaves no stone unturned in its examination of all the issues, and – as always – pulls no punches in declaring who the winners and losers are and will be.