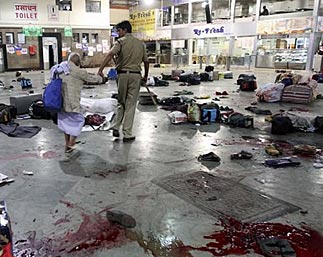 The only people who will be protected by this notice are the State Department bureaucrats who carefully crafted it to say nothing and everything at the same time.  They clearly hope, if nothing happens, no-one can accuse them of scare-mongering or being alarmist; but if anything does happen, they can say 'well, we told you so'.  A win-win for the people in our government who are 'here to help us', but a total waste of effort for us, the people they are supposed to be helping.

Let's look at some of the things this statement says and try and understand the meaning.

'U.S. citizens are reminded of the potential for terrorists to attack public transportation systems and other tourist infrastructure' – Ummm, this is news?  Can anyone say '9/11'?  Or 7/7 (the date of the subway attacks in Britain); or less well known other dates such as the Spanish commuter train bombings or the Mumbai attacks?  And why tell us this now?  Are we being told not to take public transport?  Are we being told, as tourists, to keep away from tourist 'infrastructure' – ie just about everything we travel to Europe to see, do and experience?

'U.S. citizens should take every precaution to be aware of their surroundings and to adopt appropriate safety measures to protect themselves when traveling.'  – Could we have some specific examples of what 'appropriate safety measures' are?  Wear bullet-proof vests (illegal in most countries)?  Carry weapons (even more illegal)?  Or, ummm, what?  Let's face it, as tourists in a foreign country we are close to defenseless and helpless.

'This Travel Alert expires on January 31, 2011' – Does this mean these risks will be ongoing for four months, then suddenly end at midnight on Monday 31 January?  How was this four month period chosen, as compared to three months, five months, two weeks, or any other time period?

In all seriousness, it does indeed seem that the risk of terrorist attacks somewhere in Europe has heightened recently, although the US is doing all it can to disrupt the planning (as evidenced by reports of heightened bombing by us of Muslim terror targets in our 'ally', Pakistan).

When one looks at what happened in Mumbai (the picture above shows a scene at the Mumbai railway station) – 10 terrorists succeeded in killing approx 174 people and wounding another 300 and causing millions of dollars of damage – it is clear that it doesn't require a lot of terrorists, or even a lot of fancy explosives or weapons, to cause a great deal of harm in a high-density city environment, and it is equally clear that anyone in the path of such attackers has little opportunity to 'adopt appropriate safety measures to protect themselves'.  One anti-terrorism expert spoke of scenarios where a small group of terrorists could take over a multi-storey building, and start at the bottom then work their way up to the top, floor by floor, creating a 9/11 event 'in slow motion'.

The State Department doesn't tell us that some of the reports emerging about the plans for this new wave of terrorism suggest that there might be a team of terrorists also in place, preparing to attack, back here in the US too.

There's something to be said for an armed citizenry in such cases, isn't there.  These terrorist attacks, the same as lone crazed gunman attacks, would never succeed nearly so far, if people were shooting back.

Here's the full text of the State Department advisory.

The State Department alerts U.S. citizens to the potential for terrorist attacks in Europe.  Current information suggests that al-Qa’ida and affiliated organizations continue to plan terrorist attacks.  European governments have taken action to guard against a terrorist attack and some have spoken publicly about the heightened threat conditions.

Terrorists may elect to use a variety of means and weapons and target both official and private interests.  U.S. citizens are reminded of the potential for terrorists to attack public transportation systems and other tourist infrastructure.  Terrorists have targeted and attacked subway and rail systems, as well as aviation and maritime services.  U.S. citizens should take every precaution to be aware of their surroundings and to adopt appropriate safety measures to protect themselves when traveling.

We continue to work closely with our European allies on the threat from international terrorism, including al-Qa’ida.  Information is routinely shared between the U.S. and our key partners in order to disrupt terrorist plotting, identify and take action against potential operatives, and strengthen our defenses against potential threats.

We recommend U.S. citizens register their travel plans with the Consular Section of the U.S. Embassy through the State Department's travel registration website.  Travelers may obtain up-to-date information on security conditions by calling 1-888-407-4747 toll-free in the U.S. and Canada, or on a regular toll line at 1-202-501-4444 from elsewhere in the world.

For information on general crime and security issues, U.S. citizens should also consult the Department of State's Country-Specific Information as well as the Worldwide Caution, which can be found on the Bureau of Consular Affairs website. For further information on safety tips while traveling abroad, U.S. citizens should also consult the following website:http://travel.state.gov/travel/tips/tips_1232.html

6 thoughts on “Meaningless US Travel Advisory Issued for Europe, Protects Only State Dept Itself”