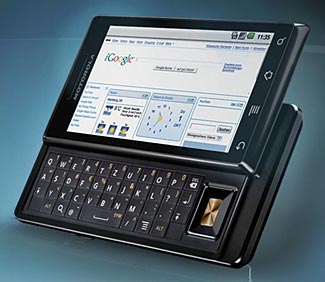 At the same time, Android phones continued their impressive rise, increasing from 12.0% to 17.0%.

If these trends continue, Android phones will catch up to iPhones before the end of the year, and some time in the middle of next year will displace Blackberry for the number one spot.  But the future is yet unwrit, with wildcards being the new version of Microsoft phone software due to be released shortly, the new version of Blackberry software also due out shortly, and of course continued innovation by Android software and the phones based on this OS as well.

Notably missing from the list of major smartphone systems?  Nokia.  There is an unexplained 3.2% of phones not accounted for in the figures, so one could guess that Nokia's market share (of the US installed smartphone market) is no more than this much, and possibly less if other increasingly uncommon smartphone OSes are also considered.

Other survey data showed the three most commonly used handset brands (for smartphones and regular phones too) were Samsung, LG and then Motorola.