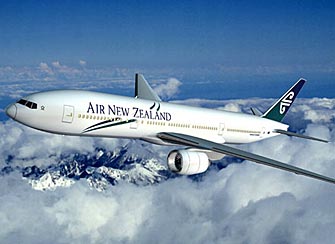 What a ridiculous situation that would have been if both alliances were approved.  Virgin would be competing with Air NZ across the Pacific, but when it came to shuttling passengers across the Tasman, they'd join forces with the same airline they were competing against to fly the person the longhaul sector across the Pacific.  How would that have worked?

The ACCC had earlier approved the request for V Australia to create a joint venture with Delta, but the DoT's refusal makes the ACCC's approval moot.

Meanwhile, Delta and Hawaiian Airlines have agreed to codeshare on flights within Hawaii.  Oh – just to show the increasingly incestuous relationship between airline 'competitors' it is worth mentioning that Hawaiian Airlines also operates flights between Hawaii and Australia (I didn't mention them in the bit about the failed V Australia and Delta alliance because they are a very small player with a low percentage of total capacity and they don't operate the essential non-stop flights that most people seek these days).

So yet again we find airlines who 'compete' in some areas agreeing not to compete in other areas.  And, yet again, the benefit to us as consumers appears elusive, while the advantages to the no-longer-competing airlines is clear for all to see.

'We changed our mind' – so says Aer Lingus.  Well, okay, I'm paraphrasing.  But after having left the Oneworld alliance in 2007 as part of its attempted transition to a budget low cost airline, it is now saying both that it wants to return to an alliance (whether it be Oneworld or not) and that is has decided to abandon its low cost strategy in favor of becoming a traditional airline once more.

Frankly, its ability to ever become a low cost airline never seemed very feasible, particularly when you consider that 'low cost' in Europe means truly ultra-low cost (think Ryanair).  Union constraints and route constraints meant it would always be difficult for Aer Lingus to zero out its past legacy of costs and inefficiencies and start from a clean piece of paper, and now they've decided not to try any more.

Let's hope they have more success back as a 'regular' airline once more.

The Official Airline Guide reports that airline capacity is increasing once more in the US, with a 2% increase in flights and a 3% increase in seats in September.  International capacity increased by a much greater 6%.  This is the second month in a row that overall capacity has increased.

Drill down a bit, and eight of the nine largest US carriers have been quietly increasing capacity for the last four months in a row, following 21 months of consecutive capacity reductions (year on year).

How is this capacity being increased?  Well, as the disparity between the 2% increase in flights and 3% increase in seats indicates, much of the growth is coming from having more seats per plane.

Alas, this does not necessarily mean bigger planes.  It also threatens to mean more seats per plane.  American Airlines is re-configuring 76 of its older 737s, increasing their capacity from 148 passengers to 160 passengers – ie, squeezing in two more rows of seats per plane, and the emphasis is on the word 'squeeze', because that's what will be happening.

Allegiant is adding a puzzling 16 extra seats to its fleet of 150 seater MD-80s.  This is puzzling because a row of seats in an MD-80 is 5 seats, so adding 16 extra seats means three more rows of five plus one more seat somewhere/somehow.

Both the AA and Allegiant changes will mean the cabin crew minimum needs to increase.  The FAA require one flight attendant per 50 passengers, and both these increases pushes the planes from needing three to four flight attendants.  But for sure the cost of one more flight attendant on an Allegiant flight is more than balanced by the revenue from potentially 16 more passengers.

Another drunk pilot, this time taken off a Delta flight due to fly from Amsterdam to Newark.  Dutch prosecutors fined the pilot €700 (about US$910).  Is it only me or does that seem like a very gentle fine?

Here's a very interesting article in USA Today about the topic of drunk pilots in general.  Did you know than on average there is one drunk pilot detected in the US each month?

In other pilot news, the FAA is proposing new pilot work rules designed to give them longer rest periods between flights, including an increase from a current eight hour minimum rest period up to a new nine hour minimum.  Noting the predilection for some pilots to spend their off-duty time partying, one wonders if that is really sensible!

More seriously, it is true than an eight (or even nine) hour gap between flights can be whittled down to maybe only four hours in bed and hopefully sleeping.  By the time the pilot clocks out, gets out of the airport, takes a shuttle bus to the overnight hotel, checks in, maybe has a meal, then gets to bed, and at the other end, gets up again, gets showered/dressed, a meal, returns back to the airport, through security, and reports for flying duty again, all the other things on either side of the sleeping bit in the middle can crowd out the actual rest time.

Another rule change would require at least a 30 hour consecutive break each week (up from 24 at present).

I'm fairly neutral on the issue of pilot fatigue.  Not really addressed is one other major contributor to pilot fatigue – the luxury that pilots have of being able to live some states away from where they work, and so having a many-hour commute at either side of a duty cycle to get between home and work and back to home again.  However, if pressed to offer up a suggestion, it would be to allow at least one pilot to be asleep in the cockpit during stable flight at cruise altitude.

Talking about 'at least one pilot', the world's master of outrageous aviation ideas, Michael O'Leary, CEO of Ryanair, has come up with a whopper.  He is suggesting that in most cases, planes should be flown by only one pilot rather than two.  But that is not necessarily an outrageous statement, however the bit which exceeds most of his earlier suggestions (such as, perhaps, this You-tube video with his X-rated suggestion about new amenities offered in a hypothetical Ryanair business class) is his suggestion that flight attendants could be trained to go to the cockpit and help the one remaining pilot in an emergency.  Hmmmmm.

A Ryanair pilot retaliated by suggesting that Ryanair could save a lot of money by reducing down from 1 to 0 CEOs, with flight attendants being recruited to help out in corporate emergencies.  Ryanair apparently took the suggestion in good humor, but for now, O'Leary's job seems to remain safe, particularly after having just paid out a €500 million dividend to shareholders – equivalent to about 8.5% of the current value of the shares.

Mind you, being as how his share of that dividend was €18.5 million (he owns 55 million shares) I guess he's not too worried one way or the other as to what his future may hold.