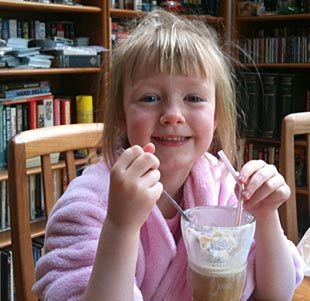 I'm writing this variously in airports as I travel down to
Auckland for the next twelve days. Needless to say, it was not possible
to interact with airline personnel without encountering some nonsense
statements.  In this case, I was checking in at Alaska Airlines in
Seattle, and I wanted to check my bags all the way through to Auckland.
I had two separate tickets – one on AS to LAX, and a separate one on QF
from LAX
to AKL.  Nothing strange about this – I've done it almost literally
hundreds of times before.

The woman asked me for a hardcopy of my Qantas confirmation.  I said I
didn't have a printout – it was an eticket, all booked online, with no
paperwork being received.  She said she needed a hardcopy, and without
it, she couldn't arrange for my bags to be checked all the way through.
I'd have to collect then in Los Angeles and recheck them on to Auckland
at the Qantas counter.
I told her that was a nonsense statement, and at variance with every
previous flight I'd taken on both carriers, but she stuck to her guns,
saying there was no way she would do it otherwise, because the AS
computer system didn't talk to the QF computer system.

She then helpfully asked if I had anything
about my travels on my computer or phone.
I said 'I have my own diary note that I created myself, but it is
nothing official from Qantas'.  She said that would be okay, and
briefly glanced at a diary note I'd made for myself ("11.40pm QF26 to AKL") and then proceeded to check my bags all the way to Auckland and
also to issue my daughter and I boarding passes for the Qantas flight
too.

I asked her how it was that when I told her my flight details, she
couldn't do anything, but when she saw a note I wrote to myself on my
iPad screen, she could then miraculously do everything – even issuing
Qantas boarding passes too.  She said 'Oh, we can only do that
because
you booked both flights together'.

I showed her the boarding passes she had printed out, and pointed to the
027 ticket code for an Alaska issued ticket and the 081 code for the
Qantas issued ticket and explained the tickets were completely separate.
Two separate records, in two separate computer systems, each booked
directly with the respective airline, even on different days.

She had no answer to that, because, of course, there was no answer to
offer, other than to 'fess up that she'd been on a small power trip
trying to force me to provide her with paperwork that I didn't have, and
lying to me about the need for it.

Heard while waiting for my flight in Seattle :  'This is a call for
Susie Smith, an unaccompanied minor traveling to San Diego.  If you
are in the terminal, please would you come to the boarding gate.'
Translation – 'OMG, we've lost a child.  Where are you?'

There was an excellent (or should I say
dreadful) example of one of the things I hate the most about Alaska
Airlines when we waited on board the plane prior to pushing back from
the gate and flying to Los Angeles.

My flight was scheduled to depart at 5pm.
I was on board the plane at about 4.20pm.  At 4.25pm, with boarding
only perhaps one third complete, and 35 minutes prior to scheduled
pushback time, a flight attendant announced that now would be a good
time to start shutting down all electronic items, because they had to be
off prior to the door closing.

At 4.38pm, the suggestion became a mandate.
Anything with an off switch must be immediately switched off.  This
was 22 minutes prior to scheduled pushback.  I wondered if this
meant we would leave early.

A few minutes later the flight attendants
congratulated themselves over the pa system 'cabin secure'.  But
the door remained open, and passengers continued to wander on in ones
and twos.

At 5.05 pm one of the pilots made an
announcement, apologizing for the delay, but they were waiting for one
more crew member (the other pilot, as I saw when he arrived at 5.10pm).

Question to Alaska Airlines :  Why did
you recommend we start turning off our electronics before you even had
both pilots on board?  Why did you mandate that all electronics
must be off, and declare the cabin secure, while people were still
boarding, and with one pilot still missing?

I had actually entered in to the start of a
sensible discussion with a senior Alaska Airlines official on this topic
earlier this year, but she stopped responding to my emails.

The arrogant idiocy of such behaviors
exceeds my ability to express frustration at them.

There should be a law against such behaviors.  Or should there?
With that as clumsy segue, may I introduce you to the next part of my
ever-growing series on airline deregulation.  This week I look at
the benefits we have all received subsequent to airline deregulation.
This is a topic on which there is a huge amount of uninformed opinion
freely being offered, and – as is often the case – the facts are very
different to what many people perceive them to be.  And so :

This Week's Feature Column :
The Six
Substantial Benefits of Deregulation : In this double article
feature, I list the six major benefits that have flowed from
deregulation through to us, the traveling public. Some of them are
surprising, and all of them are good.

Talking about laws relating to air travel,
someone broke a very important law this evening.  Both in Seattle
when I was given boarding passes all the way to Auckland by the Alaska
woman, and again in Los Angeles when I rechecked in and was given new
boarding passes by the Qantas staff, I had to show passports for both
myself and my six year old daughter.

But nowhere, at any stage, did anyone ask if
I had an official notarized travel authority by my ex-wife allowing me
to take our daughter out of the country.  Of course I did have such
a document, but I'm concerned that this very important check on parents
absconding with their children was completely overlooked on both
occasions.

However, although no-one cared if I was
lawfully taking my daughter out of the country or not, the TSA singled
her out for secondary inspection at LAX.  Anna did not beep when
going through the metal detector, but the TSA geniuses alertly spotted
that she was wearing a dress and worried that she might have been
concealing a bomb underneath its folds.  I remind you again that
Anna is a slim almost six year old little girl and I dare to hope that
neither she (pictured at the top of this article) nor I look like
terrorists.

One other thing about the Qantas checkin at
Los Angeles.  Next time I'll not do that and simply use my third
party issued boarding pass, even if the Qantas boarding pass readers
can't automatically read it.  The reason I say this is because they
weighed my carry-on bag as part of the checkin process.  Max
allowable weight – 8kg/17.5lbs.  My bag's weight – 9.2kg/20lbs.
Fortunately, the nice Qantas agent didn't make me transfer heavy items
to my daughter's massively underweight backpack, but if I was on my own,
I shudder to think as to what my options would have been.  I've
only ever once had to have my bag weighed before (and that was with
Aeroflot) although I've come close to it on a few occasions.

If you are receiving the daily or real time updates, you'll have
received an article on Wednesday about a fare sale on Virgin America –
alas, it expires/expired Thursday midnight.

There's not a lot more in addition to the
almost 4,000 extra words on deregulation, although there's an
interesting shorter article on how it seems that both Southwest and the
dinosaurs are all winning with their respective bag strategies (not
charging for them or charging for them).  And be sure to look at
the list of the world's weirdest airports.

I don't expect to have a lot next week, due
to touring around New Zealand, but we shall see what we shall see.