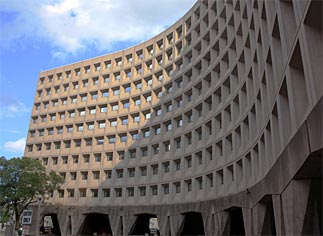 This is America, not Amerika, right?  A
nation built on liberty and freedom.  It is our heritage, it is
what we are taught, it is what we treasure, and it is even what we fight
and die for.

So how can we understand, let alone excuse,
the un-American (and happily completely wrong) claims by police and
security guards, all around the country, who try and prevent ordinary
American citizens from taking photos of public buildings and other
structures – buildings that are widely photographed, which can be seen
in Google Streetview, and which even proudly show their own photos on
their own websites?  (The picture illustrating this article – of
the HUD building in DC – is one which a security guard told the
photographer was illegal to take.)

Shouldn't all police instinctively think
'Hey, what's with restricting the taking of photos – this isn't the
former Soviet Union'?  But, no, instead of that, why do so many
police bully, hassle, harass, and even assault photographers, telling
them they are not allowed to take photos, and in some cases deleting the
photos off the camera?  Most of all, why are they doing this when
there is no law authorizing them to do so, and indeed in most cases,
there are operational guidelines reminding them that taking photos is
permissible and legal?

excellent article on the topic.  If you click through their
links, you'll also come to the

delightful story at the top of this page about how a Union Station
security guard interrupted and stopped the filming of a television
interview with an Amtrak official – the subject of the interrupted
interview was the official explaining that it was legal and permitted
for people to take pictures at Union Station!

Back to my original question – not only how
can we accept/excuse the gross unAmerican actions of people who are
professionally required to know better, but how can we also accept the
passive empowerment of such actions by their supervisors and superiors?
Read the part of the article about the police officer who tackled Jerome
Vorus to the ground, seized his camera and deleted the images on it.
An audio recording was being made of the incident (but obviously no
photos!).  An airports authority investigation was inconclusive
(!!!) about whether Vorus was tackled or his pictures deleted.

This guy's subsequent attempt to photograph
a traffic stop resulted in him being detained for 'illegally' filming
the interior of a police car from 20 feet away.  There is no such
prohibition on the statute books, but the police officers' commander
said the policemen acted appropriately because the mere act of taking
photos 'escalates the situation'.

So taking photos – while legal – also
'escalates the situation' even when the photographer is not part of the
situation and 20' away?  And that then makes it acceptable for the
photographer to be hassled by the police?  That is absolutely not
the American way – why are the people charged with protecting our
liberties now the people most aggressively – and unlawfully – infringing
on them and curtailing them?