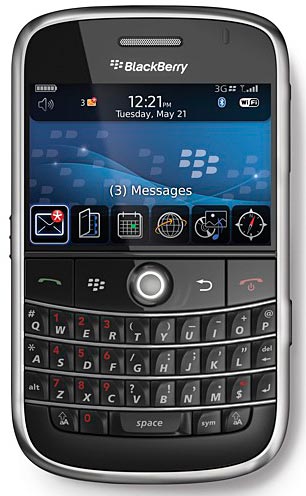 Smart phones are one of the most rapidly changing and excitingly evolving sectors of the consumer electronic industry these days.  Phones using the Google Android operating system have massive touchscreens, multiprogramming, and a vast array of additional features and capabilities; the iPhone is now on its fourth generation, and each successive model has been appreciably better than the one before it.

But at the same time as the iPhone and all Android type phones have clearly become market leaders and market winners, there have necessarily been losers to balance out the market distribution.

Some of the losers have been unsurprising – most notably Palm.  Others have been surprising in the sense that they’ve never really fulfilled their initial promise – Sony Ericsson for example, and also Nokia.

And then there is the market goliath that seems to be sitting passively in the corner, quietly watching its market share drop and drop and drop.  I refer of course to Research in Motion and their Blackberry products.

It has seemed that Blackberry has been relying on two things – the first is its strength in the corporate market where its proprietary email management is sometimes incorporated into a company’s overall IT system and so therefore becomes a mandatory and unavoidable product that employees must use.  The second is its brand reputation and marketplace strength, giving it automatic access to sales in the form of people simply upgrading older Blackberry devices and not wishing to suffer the hassle of converting to a new type of device, having to learn a new interface, reconfigure the device, etc.

And on the passive basis of ‘a rising tide lifts all boats’ the massive increases in smart phone sales overall has meant that even if Blackberry is losing market share, it is still making sales at impressive levels.

Blackberry is also waving the promise of a new Operating System upgrade – their OS version 6 – due sometime in the third quarter of this year.  Little is yet known about what their OS 6 may comprise, although some leaks suggest it will have a much improved web browser (an essential upgrade – their present web browser is close to completely unusable).

Blackberry needs to get this out urgently fast.  A recent study suggests that Blackberry’s share of the US smart phone market dropped from 55% in the first quarter of 2009 down to 41% in the first quarter of 2010.  At the same time, the Android and iPhone share jumped up from 23% last year to 49% this year.  By implication, all other smart phones had their share drop from 22% to 10%.

So Blackberry has gone from dominating the market with no other major competitor to now having a 41% and declining share, while iPhone and Android phones are racing ahead.

Not only is Blackberry’s market share dropping, but what was their greatest competitive advantage – their entrenched position in large corporations – is also eroding away to nothing.  Apple claimed, last week, that 80% of the Fortune 100 companies are either deploying or testing iPhones, and you can be certain that many of the remaining 20% (as well as much of the 80%) are testing/deploying Android phones too.

Most important of all, Blackberry has lost its ‘sex appeal’ and sizzle.  Do you remember when having a Blackberry was something to be proud of, and which ‘ordinary people’ were envious of?  That has totally disappeared.  But pull out a giant screen Android phone, or a new iPhone 4, and you’ll have people crowding around to have an admiring look at it.

The excitement and buzz that Blackberry has lost is reflected also in its own attempt to create a marketplace for third party software developers to sell apps.  Most developers have ignored Blackberry, choosing to concentrate instead for developing their software for either or both the iPhone and Android type phones.

Blackberry is increasingly looking irrelevant to developers, to corporations, and to individuals.  And with the passing of time, it seems likely that its new OS 6 will merely be a catch-up ‘me too’ type product, rather than an exciting new product with innovative new features that capture the marketplace imagination the way each new iPhone and Android release does.

It is no coincidence to report that I finally turned my Blackberry off for the last time a week back, after having not used it for many months, and have terminated its service contract with T-mobile.  My iPhone does everything I need, the Blackberry adds nothing extra that the iPhone doesn’t already have (and usually in a better form).

More commentary on the topic in this NY Times article.  And this article, essentially recycling the same content, has a telling headline that risks becoming a self-fulfilling prophecy – it says ‘Research in Motion :  Doomed?’