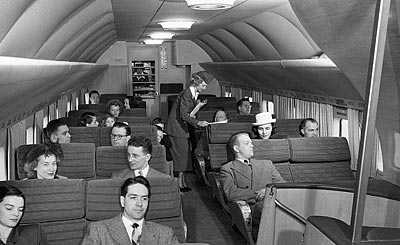 It is boom time for the airlines again.
Rather like the biblical times with periods of feast alternating with
periods of famine, even the tight economic times at present are not
interfering with a roaring return to profitability by the major
US carriers.

The Air Transportation Association reported
domestic passenger revenue rose some 25% in June over the same period
last year. This is the sixth consecutive month that revenue has
increased. For the 12 months ending June 2010, passenger revenue was
approximately 0.5% greater than calendar year 2000 levels (the last boom
period before the extended bust starting from 9/11 in 2001).  The
average price to fly one mile rose 20% compared to last year.

So is it any surprise then to see massive
profits returning to the airlines as they announce their second quarter
results.  Delta reported a 17% increase in revenue (compared to the
same quarter last year) which saw last year's $257 million loss swing to
a $467 million profit (excluding one-time items).

JetBlue had their best second quarter ever,
with a $30 million net profit.  The airline said that it expects
higher revenues and to operate more flights during the second half of
the year.

AirTran had a $39 million profit before
special one-off items.

Continental had a $233 million profit, and
its future partner-to-be United had its best second quarter since 1999,
with a $273 million profit driven by a 28% increase in revenue.

So tell me again why UA and CO need to
merge?

Ominously, United isn't happy with its best
result since 1999.  CEO Tilton said ancillary revenue was 'the
future' of the business and said 'I think there's a billion dollars in
bags alone and right now we're only getting about $400 million'.
Only $400 million?  There was a time when airlines would obsess
over the costs of a lettuce leaf, and now they treat $400 million of new
revenue as small?

If United expects to more than double its
revenue from bags, that suggests United plans on increasing their
current fees – currently $25 for a first bag, $35 for a second bag,
and $100 for a third bag; these would have to increase all the way up to
$62.50 for the first bag, $87.50 for the second, and $250 for extra
bags.  And if you squeezed everything into one bag to save
money, but you end up going over the 50lb limit, your overweight fee
will increase from an already shamefully costly $100 all the way to
$250.

Oh – and don't forget.  Those are
one-way fees.  Do a roundtrip with two bags, one weighing over 50
lbs, and currently you'd pay $320 roundtrip.  United thinks that it
can charge $800 for this – probably more than twice the cost of the
ticket itself.

Have the airlines lost all sense of
fairness?  Hey – at least let our bags earn frequent flier miles
– after all, we're paying more to transport them than ourselves!

So far, American is the only airline to
report a loss in the second quarter. The airline has a net loss of
$10.7 million, including special items. It was, however a much better
performance that the loss in the same period in 2009 when the airline
reported a net loss of $390 million. American implied that the reason
for this loss was due to fuel costs being higher than last year, and
said it paid nearly $334 million more for fuel this year.

Ummm – didn't all the other resoundingly
profitable airlines also pay similar amounts more for fuel, too?

However, American has come up with an
interesting new type of fee to charge.  A 'jump the line'
fee.  Here's a

rather depressing article about new fees that airlines are trialing.

One thing is for sure, I don't want to hear
'we can't afford it' coming out of their mouths anytime soon.  With
some of the best profits ever, and a rosy outlook for at least the
near-term future, the airlines are back in a brilliantly profitable
operating mode.

Perhaps with American's loss (and also
British Airways and its horrific losses of late) we shouldn't feel quite
so threatened to learn that the inevitable outcome has now been fully
approved by both EU and US regulators – the two airlines, plus Iberia
(now merged with BA anyway), Finnair and Royal Jordanian have been given
anti-trust immunity, allowing them to coordinate their trans-Atlantic
services.

Sure, there are a few smaller participants
like Virgin Atlantic between the US and UK, and a few other airlines
that no-one really wants or cares about (all the 'good' airlines have
rushed into one of the three alliances or have chosen to remain
dangerously aloof and at-risk such as Virgin Atlantic).  But the
once hot-bed of competition across the Atlantic has now dropped to only
three main choices.

Don't worry, though.  The airlines and
the US Department of Transportation continue to claim this is for our
own good, but the US DoT, when asked to do so by me, has been unable to
quantify the exact benefits, either promised or subsequently delivered.
It is a good job we know that 'they are from the government and are here
to help us' isn't it, because we're left with nothing more substantial
to back up their assertions of the benefits we'll receive.

What part of 'keep your seatbelt fastened
when you're not up and moving around the cabin' did
these
26 passengers not understand?

Lastly for this section, remember the
good old days of traveling by air?  Glamorous air hostesses,
gourmet food, lots of seat space and legroom, reliable schedules, and so
on?

Ummm – if that is what you're remembering
with sadness and longing, perhaps your memory is selective.  Here's
a

great article that refutes the illusion of how good the old days
really truly were.

(Note – the picture at the top of this
article is the interior of a Northwest Orient Boeing 377 Stratocruiser,
probably dating back to some time in the 1950s).