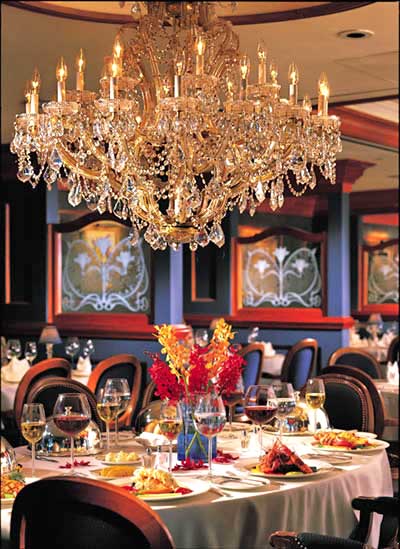 At the suggestion of my friends at JustLuxe.com, I’ve added a new page to my series about Upmarket Orlando and Disney World, this
page being a roundup of general upmarket travel things in the Orlando area, not quite so focused on or dominated by Disney.

(The image on the left is from the stunning Atlantis Restaurant at the Seaworld Renaissance Hotel.)

Orlando has changed enormously since Disney (well, actually, Walt died in 1966, his older brother Roy took over and oversaw the project through to its opening) opened up the first of what is now a massive number of different entertainment complexes in the Orlando area in 1971.  The overall project is known as Walt Disney World, and the first theme park was the Magic Kingdom, largely analogous to Disneyland in Anaheim.  This was followed by Epcot in 1982, Disney’s Hollywood Studios in 1989 and Disney’s Animal Kingdom in 1998.  Other smaller attractions have also been developed (eg Disney’s Typhoon Lagoon, Downtown Disney, and others).

The next major presence in the area was Universal Studios, opening in 1990, and added to in 1999.

An interesting thing happened over time.  As the number of visitors coming to Orlando steadily grew (now more than 50 million a year) the area diversified and developed, adding new tourism products and experiences of more specialized interest, over and above the core ‘family fun’ type products that had been its staple to start with.

Nowadays, there is an impressive arrange of deluxe hotels, fine dining, boutique shopping, and all sorts of activities, from relaxing indulgent spas to high energy speedway racing, hang gliding, and flights in historic biplanes.

Orlando definitely has something for everyone, whether or not you wish to visit Walt Disney World.