So, on Friday 13 March, to get to Swindon, you should take a train from London’s Paddington station.  The journey is 50 – 55 minutes and there are no changes to make on the way. 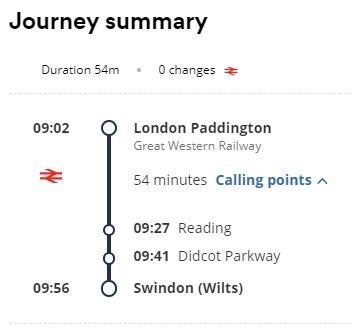 Next question is how long to plan to spend going to the White Horse, etc.  I suggest 3 hours.  That would seem to be a generous amount of time, you could do it in less, but with three hours you’ll not be rushed. 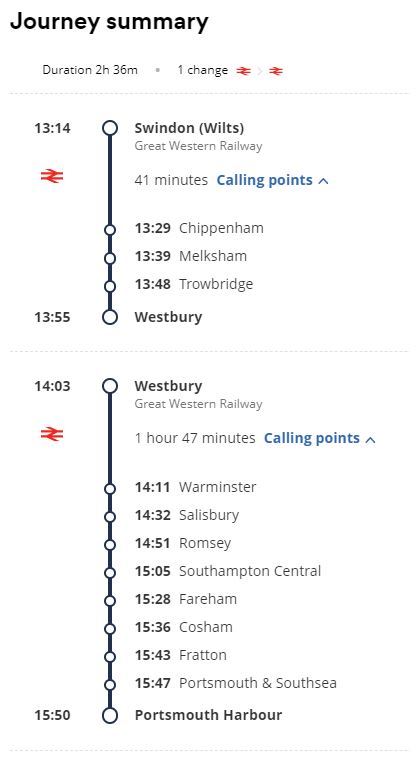 So, looking then for trains from Swindon down to the Portsmouth area, there is a train at 1.14pm to Westbury, where you have eight minutes to change to a second train on to Portsmouth & Southsea station (the train arrives at 1.55pm and the next train leaves at 2.03pm) and then continuing on to Portsmouth Harbour station, arriving at 3.50pm.  Westbury is a small train station with four platforms side by side, so it should be easy to do that change.

(You’d get off at Portsmouth & Southsea and take a taxi to the hovercraft departure point – you have decided to take a regular ferry), or you’d get off at the Portsmouth Harbour train station and walk a very short distance to take the regular ferry.  There’s a ferry at 4.15pm, and the crossing time is 22 minutes, so that would be easiest/best, I suggest.

Return from Ryde to London

You want to be back in London by about 8pm on Tuesday 17 March.

The 4.47pm ferry allows for an easy connection to the 5.45pm train.