The trucker protests against vaccine mandates continue in Canada, and have been echoed here and in other countries too.  I noted an interesting comment – many tens of thousands of truckers are said to be involved in these protests, with not a single act of violence or mayhem/rioting/looting/arson/destruction.  A comparison was made with “BLM” type protests…..

While Prime Minister Trudeau in Canada continues to say he has no plans to involve the military to suppress the protests, albeit in a passive-aggressive manner to remind everyone he could indeed do so any time he feels like it (Canada has no posse comitatus constraints), in New Zealand the left-wing government there is playing very hard-ball with its protestors, who are camped next to the country’s Parliament Building.

The strict New Zealanders have no hesitation in deploying cruel and unusual punishment to brutally force the protestors to disband.  They are playing Barry Manilow music loudly through speakers aimed at the protestor camp, enlivened on occasion by the tune “Macarena” that many of us might remember for some decades ago.

Not even the best of noise cancelling headphones can defeat the horror of that.

As for the protests themselves, while no politician will admit it, they seem to be well-timed, because countries are dropping Covid restrictions.

Whether or not the total drop in restrictions is a good idea or not remains unclear.  This series of tweets looks at what has happened in Denmark since it decided to drop all restrictions. 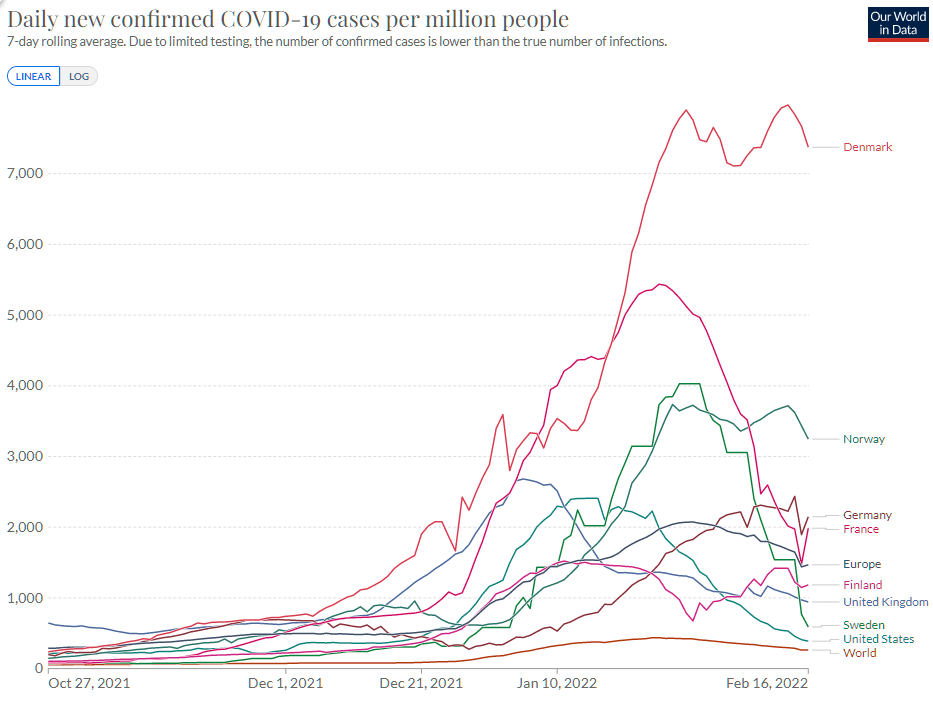 This updates the case rate numbers from those cited in the linked tweets.  As you can see, Denmark has yet to have an appreciable drop from its extremely high daily new case rate numbers.  A rational person would see little to support a claim that the virus has been beaten and things can now return back to normal, at least, not in Denmark anyway.

The silencing – not just of “anti-vax” sentiments, but increasingly of any discussion whatsoever that threatens to emperil the “official narrative” by means of deploying facts to rebut the narrative is continuing to escalate.  News this week shows how far Forbes has gone from when it was a right-wing open-minded publication – this former Forbes columnist claims to have lost his job with Forbes due to daring to show an alternate perspective on Dr Fauci and the vast earnings he and his wife get from the government each year.

The Faero Islands pulls even further ahead of other countries in the minor country list, and “we’ve beaten the virus” Denmark has moved from 8th to 6th place.  I guess they’re relaxing their controls because the virus is running out of vulnerable people to infect (41% of the entire country has now had the virus, possibly more).

The Netherlands opens up a strong lead on France in the major country list.  Ten of the twelve countries in that list are European, the other two being the US and Argentina.  Why has Europe been so afflicted?

The growth in deaths should remind us that, while omicron is not as deadly as the earlier variants, it is still not to be trifled with.  We in the US are still having over 2,000 deaths every day.  That contrasts with about 105 people a day dying in road accidents.

Generally good news and lower case rates for the last week, as shown in the final table.

Items below include the situation where increasingly people are allowed to use euthanasia as an ultimate solution to their ills and ailments – but not to take experimental and unapproved treatments in the hope of staying alive, more challenges for Novavax as it struggles to get itself into our pharmacies, a possible future strategy for the US and its vaccination policies/requirements, perhaps Chinese vaccines are better than originally claimed, why aren’t we being told how much the government is paying for the “free” Covid tests it is offering, failures in peer reviewing, and still more stilling of free speech and valid opinions fairly stated but opposing official narratives.