“The science has changed”.  That’s a statement being expressed way too often at present. 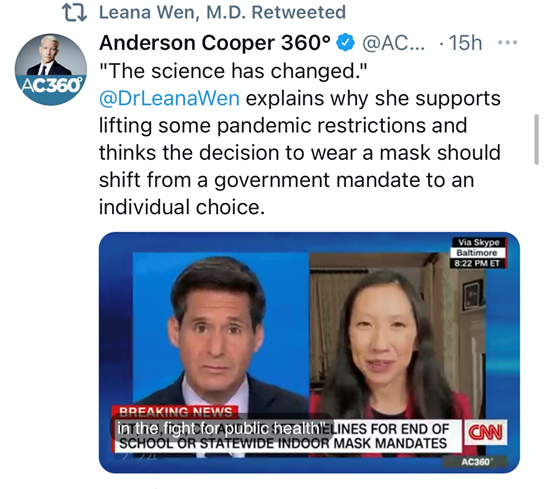 That is of course a nonsense statement.  Science doesn’t change.  Our understanding of science might change, but not the underlying science itself.

But, of course, a plea to “follow our current possibly imperfect understanding of the science which might change in the future” isn’t quite as appealing as mandates to “follow the science” without any qualifiers, is it.  And referring to people as “science-deniers” is a stronger epithet than calling them “people who disagree with our current interpretation of the science”.

It seems parts of the Covid narrative are continuing to become undone.  For example, this new article reports on another major indication showing the virus emerged from China’s Wuhan virus labs – something that has always been the obvious logical choice, but which, a year ago, would have got you vilified for being a conspiracy theorist and booted off any social media site on which you chose to assert such concepts.

It makes you wonder (or, it should!) what other censored Covid concepts might also end up being proved true, doesn’t it.  Always assuming that the people advocating such views can break through the stranglehold of censorship and refusals to fairly evaluate their science.

Another example of how “science” is never universally and unchangeably right is this interesting story of how researchers have developed a revolutionary new type of material that is stronger than steel but as light as plastic.  All main-stream scientists asserted and insisted on the impossibility of creating such a material, and would happily “prove” to you how and why it would be impossible to do so.  But, they were wrong.

Have you noticed how there has been a distinct shift in social attitudes to Covid and our responses to it, in just the last week or two?  We’re no longer being barraged by stories of how terribly dire the situation is and will become, but instead, the news is all about countries relaxing their restrictions.

But, why?  Covid cases are still at historical levels, albeit falling on most countries around the world.  Or are they indeed falling?  For example, a reader in London writes

The numbers are misleading. My wife and I are literally the only people in our circle who have not tested positive over the past two weeks. Five more friends reported positive tests today alone. Half our London-based international team are off work at this moment with Covid.

But here’s the catch: Of the 19 people I personally know — and 29 if families are included — who have or have had Covid over the past two weeks, only one has reported it in to the National Health Service. The symptoms are so light in most — not all — cases that no-one bothers reporting to the NHS.

Can that really be true?  Only one in 29 people in the UK are reporting their Covid infections?  Actually, no, it is unlikely, because if correct, it would have meant, a few weeks back, over 100% of the population getting infected, several weeks in a row.  But even if adjusting from this reader’s circle of perhaps anarchistic and Covid-susceptible acquaintances to a more moderate number, it does credibly suggest something I’ve wondered about – now there is reasonably available at-home testing, and with no immediate treatments and few serious infections, is it possible that part of the reduction in official cases is simple due to people not bothering to make life difficult for themselves by reporting their infections?

Which would you rather have?  Immunity or protection?  One is an absolute, isn’t it; the other is a milder and more relative thing.  A bullet-proof vest might give you protection against an assassin’s bullet (subject to various limitations, which is the whole point), but Superman’s special powers would give you immunity.  Which brings us to the change in CDC definition of vaccination, from something that gives you immunity to something that gives you protection.

The shills known as “fact-checkers” praise the CDC for being more transparent.  Harder-headed people say they’d prefer immunity rather than protection, and wonder why the CDC changed the definition of vaccination rather than more honestly conceded that the mRNA temporary gene treatments are not vaccines.

Back to the shift in attitudes, both at an “ordinary” man-in-the-street and at a political level too (but not in Canada!), it seems everyone is now rushing to end the various mandates and requirements and demands imposed on us.  While it is amazing to contrast these attitudes now with those of two years ago, when, with much lower rates of infection we were rushing to institute as many controls as possible, it does seem that fewer controls now are probably a good response.

I remain hopeful I’ll not be forced to get a “booster” experimental “vaccine” shot.  In that context, and as part of the liberalizing that is going on worldwide, it was great to see Hawaii rethink its planned requirement for all visitors to be both “vaccinated” and boostered too.

In England, the push to end restrictions, with Prime Minister Boris Johnson promising this week that all remaining Covid restrictions in England, including the legal requirement to isolate, will be scrapped this month, seems to be driven not by science, and not even by “science”, but rather is a response to his poor showing in recent polls and desperate attempts to head off a vote of no-confidence among his fellow party members that would see him ousted from office.

Of course, Scotland has to go in the opposite direction – anything England does being anathema to their Scottish Nationalist leaders – and has said its Covid powers will be extended for another six months, although what that means in terms of actual restrictions is anyone’s guess (including their own – they probably don’t know, but feel good doing the opposite to England).

Here’s a great article about the lack of proper safety testing prior to when the experimental mRNA gene treatments were approved as Covid “vaccines”.  It is becoming more openly accepted now that the “spike” proteins these gene treatments cause to be created can cause harm to the body in the same way that the actual Covid virus spikes do.  When you think about it, that seems unsurprising.  But we’re told that the danger/harm from the mRNA spikes are not as great as from the Covid spikes.  That might be true, but being the lesser of two evils should be recognized for what it is – a desperate and dangerous compromise that needs to be urgently replaced with real safe longlasting vaccines.

There was an astonishing leap in total cases in the tiny Faeroe Islands over the last week.  10% of the population reported new Covid cases during that week, pushing them to the top of the minor country list.  And that’s the official Covid case count; who only knows what the actual unofficial real number might have been.

Surprises in the major country list too, with the Netherlands soaring up from fifth to second place, all in the space of a single week, pushing the Czech Rep, long the first place leader, now down to third place.

There were no shifts in the death rate table, and the usual swings in the most active last week table, although the numbers reported by the high scoring nations were all generally lower than last week.

South Africa dropped another 13% down to a mere 310 cases per million, and Africa as a whole – remember, this is the continent we’re supposed to be weeping over due to its lack of vaccinations – dropped another 30%.  For whatever reason, after the briefest of tiny blips, Africa – where Omicron is thought to have originated – has totally escaped the soaring case numbers that impacted on the entire rest of the world.  In Africa, only the tiny island of Reunion had a higher new case count than the US last week.

Items below include another existing drug with possibly beneficial anti-viral properties, one of the most dishonest attacks on ivermectin to date, a couple of articles about how so much policy seems to be all about the money, and noting the FDA has wasted another week without approving the real and truly beneficial Covid vaccine emergency use approval sitting in their in-tray.