I remember, one time, eating dinner in a restaurant with a friend. Out of the corner of my eye, I spotted something unusual going on at a nearby table where a man and his wife were dining.  I came to realize the woman was choking, and, to put it mildly, they were both in considerable distress.  The man got up and rushed over to some wait staff and asked if they could help.  Astonishingly, they declined.

It was obvious that the woman was soon going to die, and no-one was going to help her.  So I went over and did the usual sort of stuff, including cracking at least one of her ribs as I gave her an amateurish Heimlich maneuver.  The food dislodged from her throat, and she was able to breath again, albeit painfully due to the cracked rib.  The man came and they both thanked me from the bottom of their hearts.  He then took his wife to hospital, with both delighted they had nothing other than probably a cracked rib to worry about, and I got to eat free that night.

The point is, there was a woman who was certain to die.  There were people who refused to help.  But the one amateur who did help surprised everyone by saving the woman’s life, albeit at the cost of a cracked rib.  The woman, and her husband, would have happily accepted broken bones galore in return for her life being spared, and everyone lived happily every after.

And now, let’s contrast that to people dying in hospital.  Again, a person is dying of something that could easily be cured.  Again, people who should be able to help are standing back and passively watching the patient die.  But, whereas in the restaurant, no-one stopped me from helping the woman; in a hospital, the hospital administrators and staff and their attorneys will battle you in court and even appeal judgments requiring them to allow their patients to be treated.

I will go to my grave never ever being able to comprehend how doctors who have ostensibly devoted their lives to saving patients now refuse both to administer ivermectin to their patients and also refuse to allow others to do that, to the point of obstructing court orders.  If a doctor knows enough about ivermectin to have an opinion, they at least know that it is 99.999% safe for all people in all circumstances.  That last 0.001% of risk pales beside the 95% plus risk of certain death for patients who have been allowed to deteriorate, untreated, in so called “intensive care” wards where in truth, “intensive prevention of care” is a better term to use.

If it was a person close to me, I’d chant spells, I’d walk backwards around the person 13 times while burning strange materials, and give them anything and everything that might help, because there is no downside when the alternative is death.  Just like the people who jumped out of the World Trade Center, isn’t a 0.5% chance of survival better than a 100% certainty of death?

Here’s a terrible story of two people who have recently died in hospitals where the doctors refused to practice medicine and the administrators battled the families in the courts to ensure the patients “safely died”.

I hope there is a special place in Hell for all the people complicit in those probably preventable deaths.  What has happened to our society where doctors refuse to help their patients?  Is there a greater betrayal of trust than that of a sick person, falling unconscious but believing their illness will be treated in every possible way in increasingly desperate attempts to save them?

Of course, the other betrayal is the trust that the doctors are competent and can tell the difference between dangerous poisons and safe medicines.  You would think the fact that ivermectin is on the WHO list of essential (and safe) medicines would give doctors some comfort in allowing it to be given to dying patients, but – well, again, words fail me, a skilled and practiced wordsmith, when it comes to trying to explain, justify, or defend such people.

Talking about betrayals of trust, another such example is the Chinese companies who make “masks” and then label them “KN95” and sell them to gullible fools who think that an unverified compliance with a Chinese quality standard (an oxymoron if ever there was one) guarantees them high quality masks.  According to this CDC article, the odds are against you.  60% of KN95 masks fail to meet N95 standards.

The intriguing question is which ones are in the naughty category and which ones are in the nice category, which brings us to the other Chinese business practice where a hundred different companies will all sell the identical product under different brand names, with brand names appearing and disappearing depending on how long their neutral reputation remains moderately unchallenged. 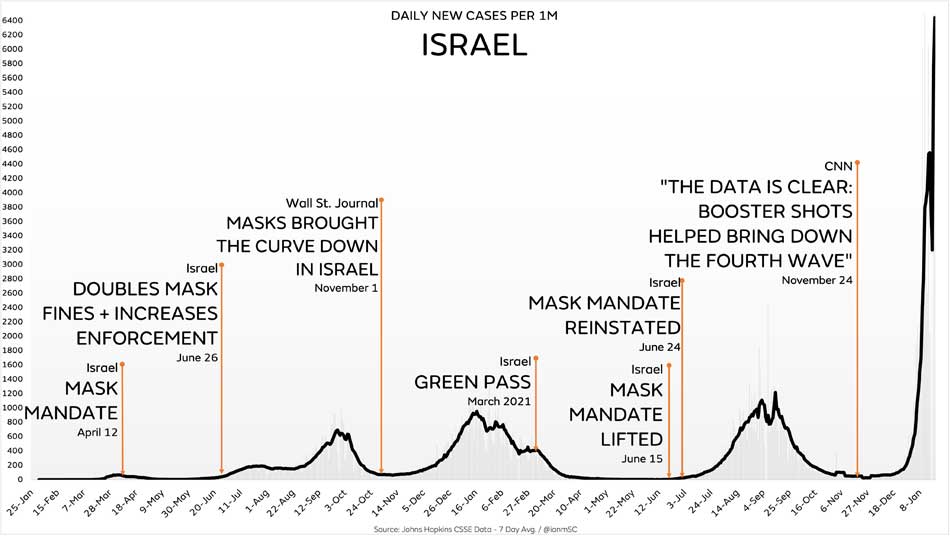 Here’s a fascinating timeline, showing various actions and claims in Israel along with the changes in the rate of Covid cases.  Israel, with one of the highest rates of vaccination and boosterization and re-boostering too is currently third on the list of countries by rates of new Covid cases.

Talking about booster shots and fourth shots and more shots, the head of the CDC has now said they will no longer refer to people as fully vaccinated, but instead, as “up to date” – a much more temporary and transient designation.  Today, you might be up to date, but keep an eye on the news, because tomorrow you might no longer be so fortunate.

This is a change in phrasing that has been long anticipated, but consistently denied until the point that it is now undeniably true.

One last thought before diving into the numbers.

On Tuesday morning, a friend requested a set of the four free Covid tests that the Federal Government has said it will send to every household that requests them.  They will be delivered to my address, and as of late Sunday, have yet to arrive, and indeed, they probably won’t even ship for at least another week.

On Thursday morning I read an item indicating that my state, Washington, is introducing a program where each household can request five free Covid tests.  I signed up for it, before my friend could do so and get the tests instead.  They arrived today, Sunday.

Super-hyper-galactically vaccinated Gibraltar (84% boostered) has now moved up to second place in terms of total Covid cases.  Even though more than 100% of Gibraltar is fully dosed, and 84% have had a booster shot, it is one small step away from leading the entire world in Covid cases.  35% of their entire population have had Covid, including 3% in the last week alone.

France is getting very close to claiming first position in the major country list.  The US may have been pushed down a place by Portugal, but as has become usual, US numbers are no more reliable than US political promises.

There were no changes in the death rate table.

All positions in the active new cases last week table were taken by countries with higher numbers than last week.

In Europe, Moldova, Slovakia, the Czech Rep, Poland and Russia all had 100% or higher growth rates in cases.  Latvia, Ukraine and Romania all had over 90%.  At the other end, Ireland saw its new case numbers drop by 66%, Spain dropped 31%, Switzerland 20%, and the UK had another 15% drop, although most of that drop was in the first half of the week, and on Sunday, it had a slight rise once more.  France had a 22% rise, and Germany a 58% rise.  Europe as a whole had a 15% increase.

In North America, Canada had a 40% drop and Mexico had a 27% rise.  The US probably had a drop, but it is anyone’s guess as to how much.

South Africa’s numbers keep dropping, with another 33% reduction this week, and only 366 new cases per million being reported for the week.  Africa overall had a 7% drop in cases.  Asia’s numbers are up 27%, South America had a 30% rise, and Oceania saw a 37% drop.  Worldwide, cases rose a mere 4%.

Items below include an interesting perspective that omits the most important elements of concern about virus mutations and why, a look at first/second/third vaccine rates around the world, and pondering the implications of empty shelves in our stores.