As we near the end of the second day of 2022,  I don’t see much difference yet from 2021, or from most of 2020 either for that matter.  In both the UK and US (and many other countries that I’m not tracking so assiduously) both new years saw us with all-time high counts of new cases, and daily new case numbers continuing to soar.

This year, US new cases were running nearly twice the rate of a year ago, and UK new cases were running at over three times the rate of a year ago.  We’ve had a year of slowly growing herd immunity (but possibly slowly-fading herd immunity offsetting that) and strongly-rising vaccination numbers (and this time with the certainty of quickly fading vaccine effectiveness) and then “booster jabs” too; offset against that has been the more infectious and similarly dangerous Delta variant (as compared to the original forms of Covid) and, in the last month, the much more infectious but apparently less dangerous Omicron variant.

The appearance of new versions of the virus should not have come as a surprise – indeed, the Delta variant started making itself known prior to the end of 2020, and we already knew, from months before, that the virus had a propensity to mutate.

But somehow, we’re as wrongfooted now as we ever have been, and it is only a growing public apathy that is saving us from the panic of the first months of 2020 and the rush to buy toilet paper (I’m still using the supply I bought in Feb 2020, and with no end yet in sight!).  As for the other panic-inspired item – hand sanitizer – the authorities (hi there, Dr Fauci – thinking of you and your colleagues) have slowly backed down from the nonsense they were spreading about us needing to wash our hands incessantly as if we were all afflicted with OCD.  With 291 million reported Covid cases around the world, there remains not a single certain documented case of anyone catching Covid from a “fomite” (contaminated surface) to their hands to their mouth.  On the other hand, who’d have ever guessed at the semi-random shortages of so many other things in our lives now.

As for masks, their value remains as controversial as ever – perhaps because the authorities have refused to quality control the types of masks people use.  And the authorities in this case (hello, again, Dr Fauci) have vacillated between laughing at the notion anyone would ever need to wear a mask, to urging us all to wear two masks, to promising us that after we were vaccinated we could forget about masks, to nowadays telling us not only are masks essential, but perhaps we should be starting to think of N95 type masks rather than designer masks.

And testing?  It’s deja vu time there.  When, between March 2020 and now, has there ever been adequate testing resources?  Actually, some states for brief periods of time have had good availability, and Colorado (possibly other states too) were offering to send residents tests through the mail, for free.  But for most of the country, we’re back in the territory of many hundreds of cars backed up with anxious occupants waiting to be tested, and (I suspect) some people who feel only moderately unwell are not bothering to get tested at all.  After all, why would you when all that happens is you’re told to go home and just wait to see if you become seriously unwell or not?

Which brings me to the last part of this “no progress in almost two years” report.  Hydroxychloroquine, and its now 369 studies (273 of which have been peer reviewed), and ivermectin, with its now 138 studies, 90 of which have been peer reviewed.  These two drugs are possibly the most studied but still unapproved drugs in our entire history.  While big pharma’s ridiculously expensive treatments, usually with only their own in-house testing, and sometimes with test results showing almost no benefit at all, are quickly approved, these two life-saving treatments remain overlooked by the mainstream, and their proponents are vilified, censored, and threatened with medical malpractice suits and/or loss of employment.

The only thing more puzzling than the origins of Covid (which no longer is a puzzle, we can now reasonably safely say what was banned/censored in 2020 – it came out of a virus research lab in Wuhan, China) is why our political and public health leaders refuse to see the facts regarding these two life saving drugs.

The rapid rise in new Covid cases being reported each day has evoked an interesting response.  Perhaps we should stop counting them – this article quotes experts who say that we should ignore that number, because it prompts unnecessary worries.  Unnecessary worries?

It is hard to know what the most important number to track actually is, and different numbers serve different purposes.  But if you think the key measure is hospital admissions, or ICU beds filled, or deaths, or anything else, you’ll still accept and agree that the count of new cases is a helpful advance predictor of what to expect with the other number(s) you might be more focused on.  That is one of the two major reasons for continuing to focus on new case numbers – because if you don’t have new cases, you don’t have anything else.  New case trends give you a little advance warning for what to expect subsequently.  Sure, the relationship between new case counts and other measures varies depending on a complexity of factors, but whatever the relationship is, the simple issue of “more cases means more other things subsequently” remains true.

The second major reason is there is public health benefit in getting a sense for how many cases are “in the wild” at any given time.  The more cases, the more strict public health measures should be, and the more cautious we should act because the chances of people we encounter being infected are higher.

And as for the “unnecessary worries” canard, another way of expressing that is to observe that the rise or fall in new Covid cases is an ultimate measure and accountability factor in terms of how well served we are being by our “experts”. 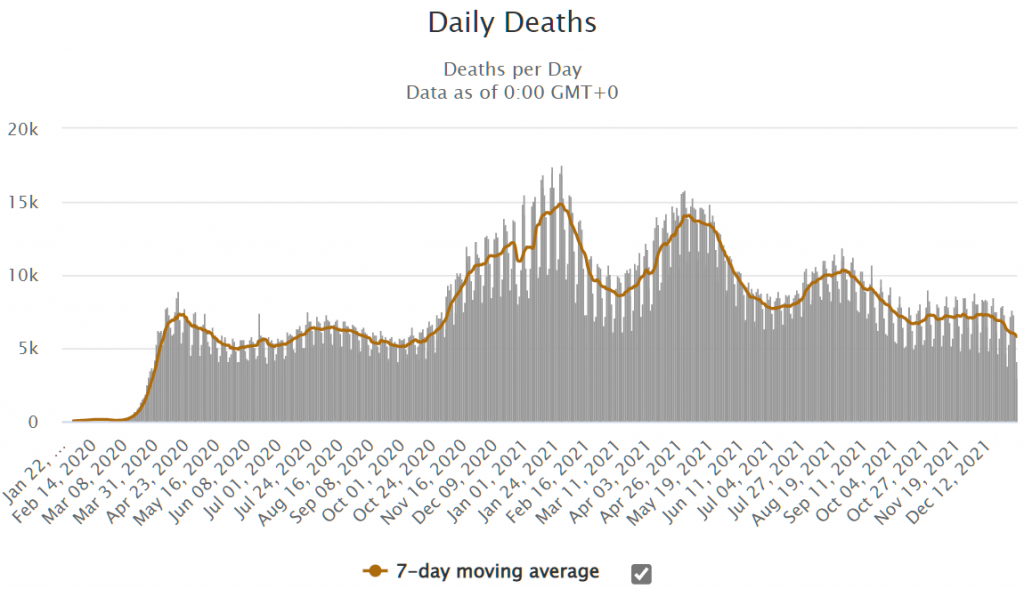 But to show the disconnect, compare the table further down the article with new cases being reported around the world with the daily deaths being reported in this table.  Daily deaths are still declining.  However, please keep in mind that it takes at least 17 – 21 days for new cases to evolve and get to possibly new deaths.  So it is too soon to expect a similar rapid rise in deaths.  On the other hand though, there has been a slow rise in new cases ever since about mid/late October, and no rise (plus now a fall!) in deaths at any point since then.

I liked this turn of phrase “The pandemic seems like a Möbius strip of bad news”.  The article is about more than “just” Covid, but still makes for good (albeit depressing) reading.  But the article, originating from the NY Times, seems too fast to blame us for our woes.  Some recent examples of mine :

What has happened to the US?  It used to be efficient, effective, sensible, and a model the rest of the world envied.  Now, we’re like a drunken idiotic speeding down a freeway at night with the lights off, in the snow.  What part of our society is still functional and envied by other countries?

To get back to the topic at hand, we can be sure that almost no other country envies our response to the virus, with us in the top ten lists for both total and current virus infections and virus deaths.

Don’t White Lives Matter?  Can you imagine the rioting there’d be if NY said “black people don’t get no testing or treatments”?  Why are we now sitting back and passively accepting a denial of access because we are white?  Change the words “black” and “white” to any color you like, or any other demographic distinguisher, and it still remains utterly and totally wrong.  How is it our country thinks this is right and fair?

We had a truncated diary entry last Sunday, and I’m far from sanguine the case numbers below are fully accurate due to New Year breaks and missed reporting, but thought we needed to keep the series going, although with no reporting last Sunday, the comparative numbers are two weeks back rather than one.

Gibraltar – the most vaccinated and boosted micro-country in the world – continues to also be one of the most Covid-infected countries in the world.

The UK is now very comfortably in second place in the major country table.  Poland sky-rocketed up the death list.

The advancing numbers of new cases in Europe show up very clearly in the “most active last week” table.  Both the US and Canada too have now joined that table.

South Africa again had a confounding drop in cases – a 44% drop, with a new case rate over the seven days of only 975/million.  That is twenty times lower than Denmark’s rise.  What happened to the Omicron variant in South Africa?  Where did it go?  Africa as a whole reported a very mild 3% rise in cases. 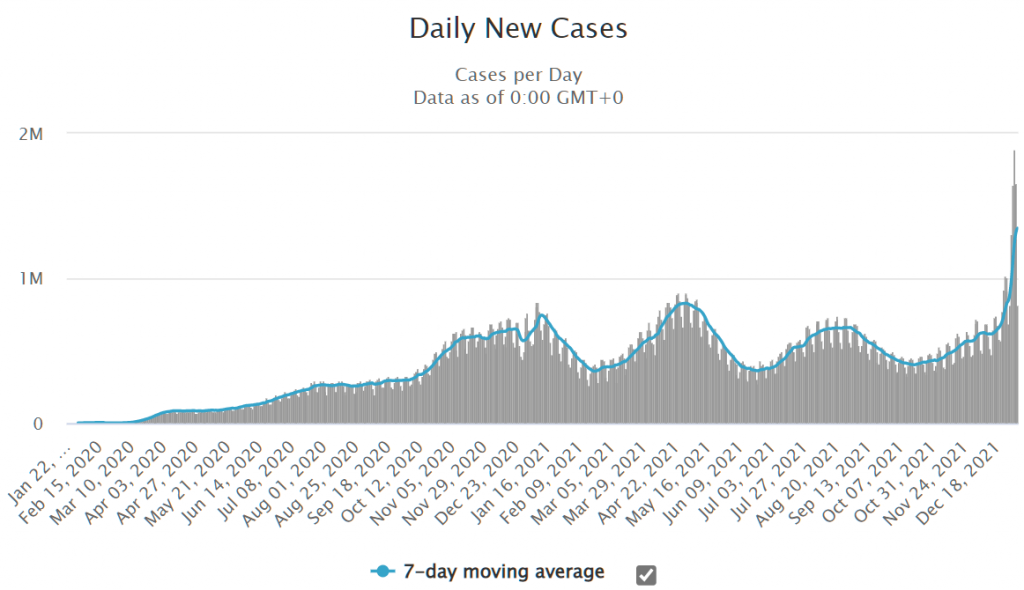 The world as a whole had a 59% rise in cases.  As you can see, globally, cases are strongly rising.

Items below include doubts about the value of a fourth jab, telling the truth gets you banned from Twitter, WHO is optimistic, others not so much, and the UK’s scientists state the obvious.