Wow.  While we may have been relaxing in the lull between Christmas and New Year, it has been a busy week for the virus, with astonishing – terrifying – new record numbers of new reported cases being reported daily in many countries, including the US, UK, Canada, and Australia. 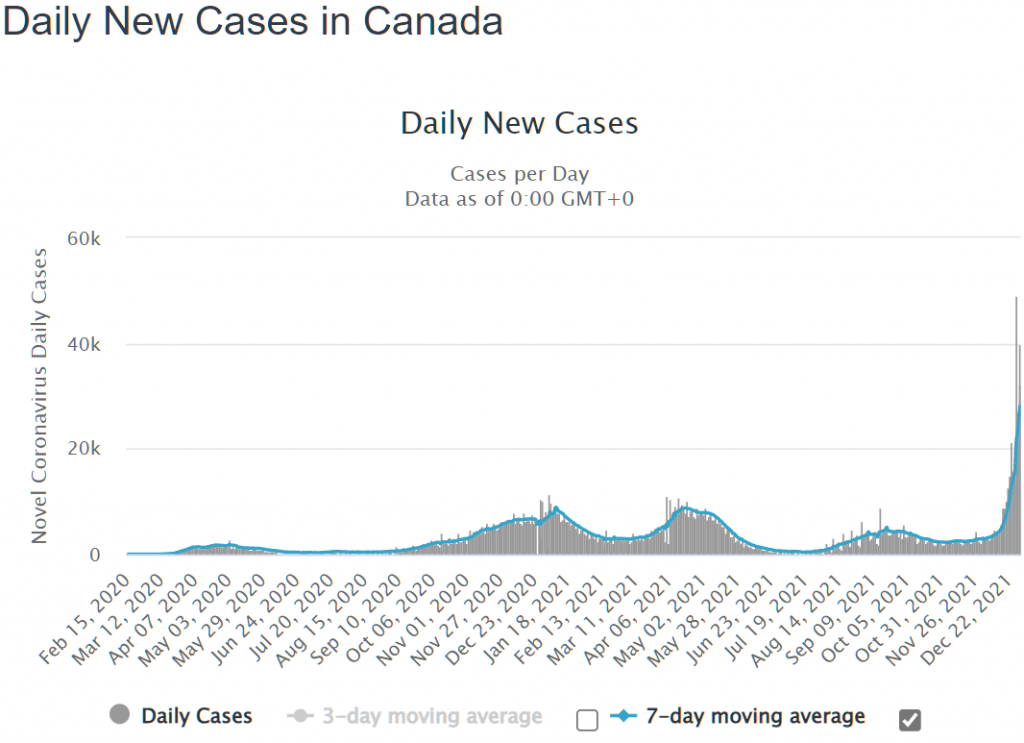 As you can see, Canada’s rise in cases is extraordinary.  While the US and UK are at levels sort of around twice past peaks, Canada is nearing four times its past peak.  There’s been little said in the media (at least, here in the US) about what is happening in Canada – we hope they’ve the surge capacity they’re going to be needing. 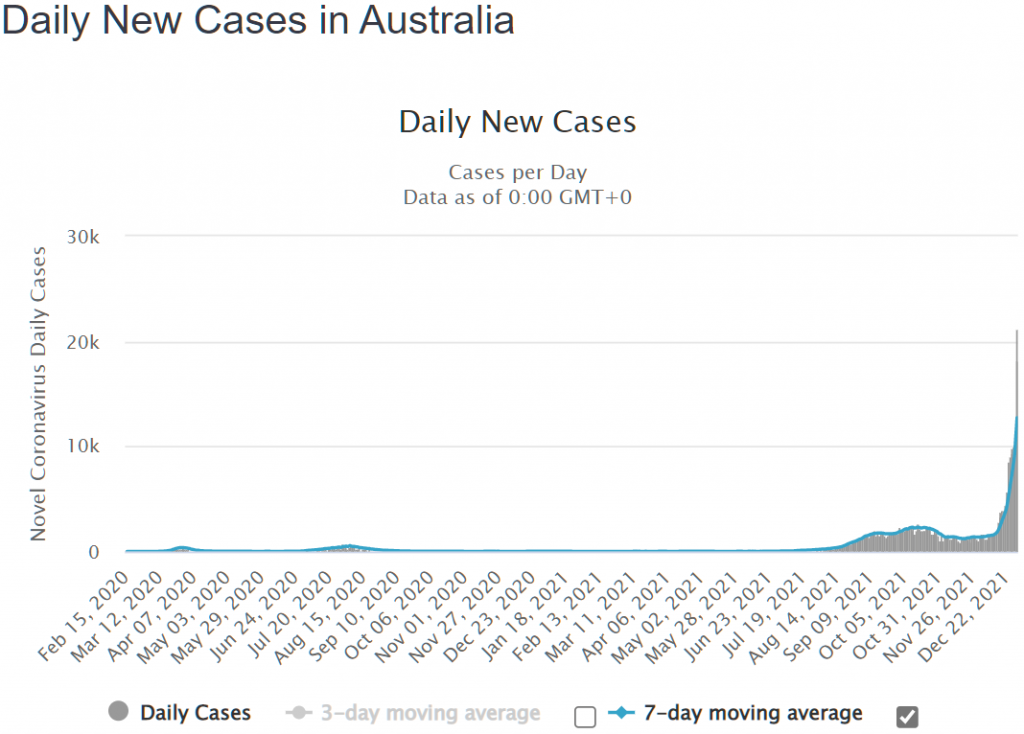 Even more extraordinary is Australia’s rise, coming as it has after almost a year of nearly no new cases every day.

Currently, there’s not yet any sign of matching increases in deaths in any of these countries (nor in most other similarly affected countries either), but with a 17 – 21 day delay between new cases and new deaths, it is only now starting to be the earliest at which we’d expect to see any type of impact appearing.

One of the most galling parts of our response to Covid is how over one hundred independent researchers – note those two words – have come out in favor of using ivermectin, hydroxychloroquine, and a range of other low priced existing treatments, while their unbiased honest well-meant studies have been summarily dismissed, often on the most unfair of grounds.  But if a “Big Pharma” company develops a new and very expensive drug with only inhouse testing and of unknown/unproven safety profile, the FDA and CDC trip over themselves in a rush to embrace it.

Why all the one-sided love for Big Pharma?  Here’s a reminder on why we need to apply at least the same and possibly stricter standards to Big Pharma as we do to independent researchers.

I think we all know that crowded places where people are laughing and shouting, such as pubs and restaurants, are dangerous and conducive to the spread of Covid.  But, in Britain, there’s a much more dangerous place to be.  One in three of all Covid patients may have caught the virus while they were already in a hospital.

It is worth taking the two minutes and twenty seconds this video runs and listening to it.  Note how all our “experts” who are busy “following the science” are trying to rewrite the history of their earlier statements.  Which of those experts should we believe now?

Perhaps we should (not?) believe the most over-exposed of all the experts, the dreaded Dr Fauci, who is now suggesting that domestic flights should be restricted only to the vaccinated (and soon enough, only to the three times vaccinated, then four times, and so on).

When you cut through the homilies and nonsense, the unanswered question to explain this concept is “How will it benefit the US?”.  Covid is rife, everywhere at present.  Moving people – infected or not – from one community to another makes no difference when both communities are already infected.  Additionally, as people are increasingly discovering, and contrary to the assurances of the experts in the video linked above, being vaccinated neither prevents you from becoming infected nor prevents you from infecting others.  The “well, at least it presents serious illness and death” is probably correct, but that’s not a reason for only allowing vaccinated people to fly.

And talking about experts changing their tune, this week the CDC issued new guidelines on isolation/quarantine (and changed them further the next day) that essentially halved the amount of time a person needs to isolate if they’re infected.

Why did they do this?  Apparently it was not so much for medical as social reasons.  Maybe they even believed the laughable claims by airlines that they were having to cancel thousands of flights due to staff off sick with Covid.

But in the new accelerated clearance timetable, the CDC inexplicably left out a vital step which again casts terrifying doubt as to their competence and comprehension of how these things work.  They did not require an “all-clear” test as a pre-requisite of ending isolation in half the previous time-frame.  Why was this – a common part of the process in other countries, even with longer quarantine periods – omitted?  Either because the CDC are indeed a bunch of incompetent idiots, blundering around and breaking things, or perhaps again for social rather than medical reasons.  Rather than highlight this administration’s utter failure to arrange abundant low-cost or even free at-home testing, the CDC decided to “Take one for the Gipper” and waive that requirement.

Talking about officials of dubious competence, WHO have been beating their chest again this week, chanting their usual drivel about ‘vaccine equity’ and the selfishness of developed nations in vaccinating their own people before giving vaccines to third-world nations.

On the face of it, you might think the WHO is sort of correct, even if it is naive (even wrong) to expect any nation to give a higher priority to other people in other countries than it does to its own people.  But the WHO is scientifically wrong in saying we’re selfish to vaccinate our own people first.

If WHO really was concerned about the most effective and efficient ways to control the virus, rather than using it as a tool to further its unscientific “third world first, no matter what” policy, they’d be advocating the use of the drugs on their “Essential Medicines” list of safe essential medicines – drugs such as, oh, how about HCQ and IVM – two drugs that WHO have been conspicuously silent about, other than to say negative things.

It is really depressing to see how, nearly two years into this pandemic, we’re still being blindsided and wrong-footed by Covid, and failing at the most basic measures – remember “Anyone who wants a test can get a test”?  President Trump was rightly criticized for the shortfall between the promise and the reality of that claim, but 18 months later, the new President, who promised to fix the shortfall, and saying the problems that were present showed how we needed strong effective national leadership, is now giving up and telling us it is up to the states, not the federal government.  Meantime, there are 600 cars in line at a Covid testing site in Missouri; the occupants not really caring who is in charge as long as someone is, and simply wanting to be able to quickly get tested.

Super-triply vaccinated Gibraltar moved one place up the minor country list.  The Maldives dropped off, as did Estonia, while Aruba and St Barth appeared.

The UK vaulted two places in the major country list and is now the second most affected country.  Sweden dropped two places, and Greece appeared for I think the first time, one up from the bottom.

Poland moved up two places in the death list, while Colombia dropped two.

And look at the “most active last week” table.  The first eight countries all had new case rates over 10,000 per million for the week, an unheard of situation to date.  The US is now on the list, too.

South Africa continues to perplex.  Its new cases dropped 39%, down to a mere 1,196 per million for the week.  What happened to its Omicron outbreak?  Africa as a whole had a 9% increase in cases.

The world reported an unusually strong 56% growth in cases, mainly as a result of North America’s 82% rise.

Items below include articles on four different Covid treatments, two of which are available without prescription, and the other two of which are inexpensive and readily available, newly disclosed data suggests maybe we don’t need booster shots, good news about the J&J vaccine, a look at the US and UK and our 2021 vs 2020 experiences, even Germany can’t count its Covid cases accurately, an honest journalist, and a recommendation to stay well away from cruise ships for a while.