There continue to be wild statements flying in every direction about the Omicron variant and its implications.  The words “irrational panic” spring to mind.  Perhaps inappropriately, I’m finding myself more reassured than terrified about what Omicron may mean for us over the next month or two.

This study from Columbia University contains the very politically incorrect admission that booster shots might not do much to help.  But you can bet that all such a finding will do is cause the pro-vax advocates to call for more booster shots, rather than to turn to other forms of response and treatment.

This study, from a source of comically incorrect doom and gloom mongers in England, suggests that the Omicron variant might be as lethal as the Delta variant.  Let’s hope this doesn’t become the exception that proves the rule of their earlier nonsensically negative projections on a wide number of different topics.

Israel is closing its borders to people from various countries, and seems about to ban its citizens from traveling to dangerous USA, in an attempt to keep Omicron away.  There’s just one thing – the article also points out there are at least 441 known Omicron cases already inside Israel.  It is way past too late to try and keep it out.

So the CDC director says she has seen no safely problems with children getting vaccinated.  It is difficult to reconcile the absolute “no problems” statement with the next data point, counting 3,233 reports of concerning incidents arising from vaccinations.

And the thing about myocarditis rings a bit uncomfortably close to home.  My 17 year old daughter, unfortunately Pfizer-vaccinated, and robustly healthy in all respects until recently, has been referred to a cardiologist to investigate some possible heart issues that have come out of nowhere.

How many people experience Covid without even knowing about it?  That’s a question that has been regularly debated.  I’ve generally held to the suggestion that perhaps for every two people who are knowingly infected, there might be about one more person unknowingly infected (in other words, about 3.5 patients in ten, maybe 4, unlikely to be more than 5).  Other studies, based on empirical guessing, questionable data, and not much else, have allowed wishful thinking to taint their findings and have suggested that instead of 3 – 5 in ten people not knowing they’ve had a Covid infection, the number might be as high as 9, even 9.5 in every ten people.

Such numbers have never been easy to take seriously; neither when they were made a year or more ago, and certainly not now, because the US already shows an average of 15.5% of the population have had known infections.  In two states, the percentage exceeds 20% (ND and AK).  Clearly, if two in ten have already had infections, and if people are still getting infected, you can’t possibly claim that the hidden/unknown infection rate is 90%.  That only works when the known rate is very much less than 10%.

Here’s a new study which suggests four in ten patients might have no symptoms.  That’s exactly in line with the claim I’ve been making for over a year, but strangely the headline says that this new claimed rate might be twice as high as earlier believed.

Here’s another example of fake news.  The headline reads “Washington state Sen. Doug Ericksen dies after COVID battle“.  The story runs a familiar course – a Republican critic of Covid control measures ends up dying of the very virus he downplayed the significance of.  You’ve probably seen many similar stories of other people and politicians already.

But.  And it is a big but.  Although the article correctly states that Senator Ericksen tested positive for Covid over a month ago, it then says “the cause of his death wasn’t immediately released”.  So how do we go from “the cause of his death is not currently known” to “dies after Covid battle”?  (Yes, I know that “dies after Covid battle” does not directly say “died of Covid” but it sure as heck 99% implies it, doesn’t it.)

Making the question more pressing are other articles reporting he died from an aggressive form of cancer.  Not Covid, at all.

In the minor country list, the world’s most vaccinated country, Gibraltar, provided further silent proof of the “effectiveness” of vaccines by moving up to fourth highest place. 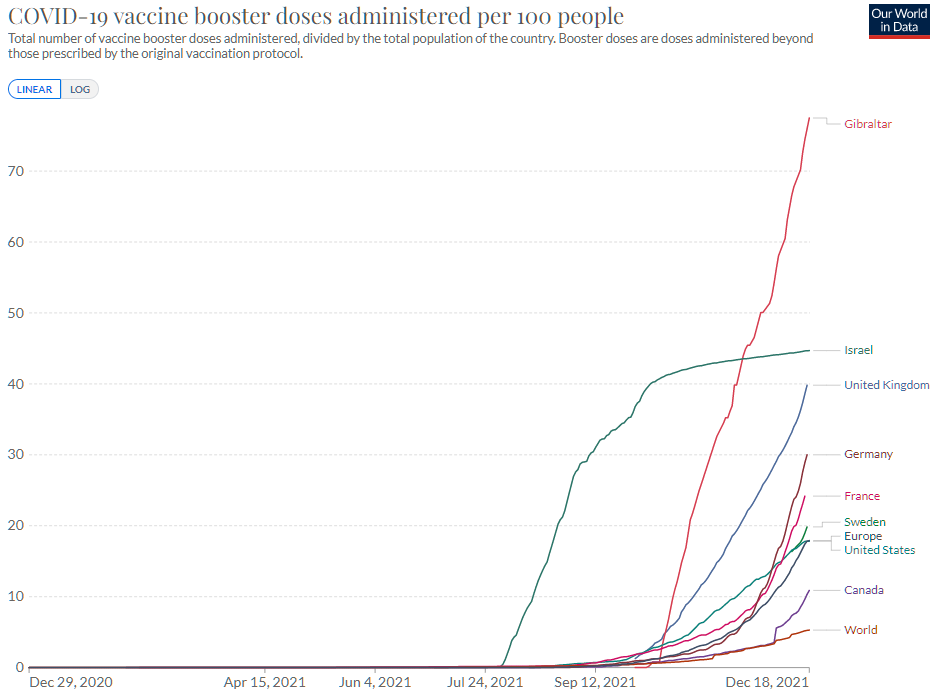 Gibraltar not only has the entire population fully vaccinated, but as you can see from the above chart, 77% of the population has received a booster dose too.  In the last week, almost 1% of Gibraltar were reported as getting a new Covid infection, and the total infection rate is now 23.2% of the country.

To be fair, we understand the reason Gibraltar shows an over 100% vaccination rate is because Spanish day-workers were getting vaccinated in Gibraltar and that was being added to the Gibraltar count.  So exactly how many Gibraltans have been vaccinated once, twice, three times, is not as exact as the statistic suggests.

Poland displaced Brazil at the bottom of the major country list.  Poland also moved one place up the death rate list, and seems likely to move up another within the next week.

And, the most active country list has its usual wild swings, with the UK now second only to Denmark with new cases.  Both countries already have significant rates of Omicron activity.

In Europe, countries with the largest rises last week were the UK (52%),. followed by Italy (41%), Denmark (39%), and Spain (34%).  Tiny super-vaxxed Gibraltar is too small to score, but if it was scored, it is worth noting that it had a 92% rise in cases.  Happier experiences were reported by Switzerland and Belgium, both with a 36% fall in cases, Slovakia had a 31% drop, and Romania continues to fall down to very low levels after another 29% drop.  Germany also fell, by 20%, while France recorded an 8% rise.  Europe as a whole had a tiny 1% rise in cases.

In North America, Canada had a strong 70% climb in new cases.  Mexico had an 11% fall, and the US perhaps had about a 9% rise, but with some states not having reported any case information at all in December, it is very much anyone’s guess.

The world as a whole rose by just 1%.

Items below include the rate of Omicron incubation and its implications, a strange new virus side effect, mangling the English language to mask vaccine failures, a puzzling claim about Covid death stats, UK data about Omicron lethality, the Russian vaccine’s effectiveness, the surprising things happening in South Africa, Omicron’s spread in selected countries, the Indian anomaly, there’s no shortage of shortages, and a “man bites dog” story.