I can understand how an unmasked person, upon approaching a group of people, might put a mask on, either as a courtesy for the other people, or for self-protection. 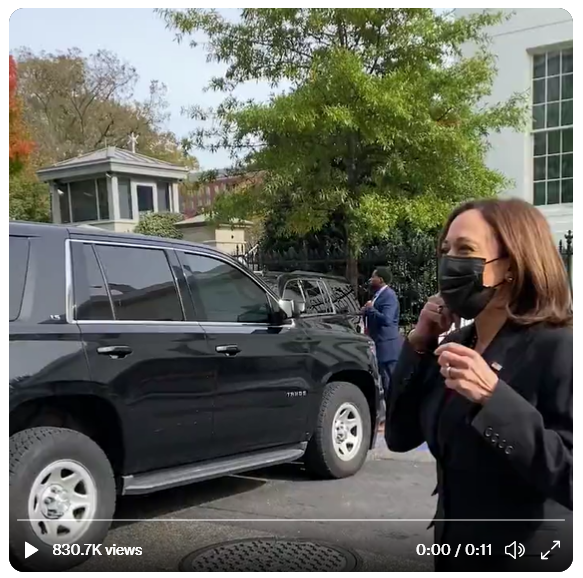 But I can not for the life of me why a person, walking along the street with a mask on, then takes it off upon approaching a group of mainly unmasked people.  (Click link for video clip.)  Sometimes, “following the science” takes you to strange places, doesn’t it…..

I must be overlooking something, because there has been no comment or criticism in the mainstream media about this puzzling act.

Here’s yet another example of some tangled logic that goes to great lengths to avoid stating a simple and increasingly self-evident truth :

Isn’t this just another way of saying “the vaccine isn’t working, so we still need masks, distancing, and ventilation”?

I continue to search for the advice, a year and more ago, that the wondrous vaccines, promised to rid us of this pandemic, would still require mask wearing, social distancing, and extra ventilation if indoors.

Why are we all unquestioningly accepting that these are normal and expected outcomes after being vaccinated?  They are not.  Sure, the vaccines seem to be reducing virus deaths, but they are absolutely not what we were promised a year ago.  Yet again, why are we not rushing to develop new better vaccines that are safer, long-lasting, and more effective?

Here’s an example of a study that purports to prove that vaccines are more protective than natural immunity.  But do you spot the bias built in to the study to guarantee its finding?  It looks only at people who have been vaccinated at least three months ago, and no more than six months ago.

This is close to the period of maximum vaccine effectiveness.  We know the first month or so after being vaccinated, protection is still building up, and we know that after a short period of “full” protection, it starts to drop off again, to the point we’re now being urged to take third shots.  Comparing natural immunity with vaccine immunity during the 3 – 6 month period after vaccination is biasing the outcome, because it chooses the time when the vaccination is most effective.  How about a comparison at 9 months or 12 months, too?

Talking about biased studies designed to create a desired outcome, this excellent article raises some credible and concerning questions about the adequacy of the trials to test the safety and effectiveness of the new “wonder drug”, molnupiravir.

Lastly in these introductory comments, one of the first things that most countries do when trying to control the spread of the virus is restrict movement of people.  So, given that, wouldn’t truck drivers be one of the more socially threatening groups when it comes to potential virus spreaders, and therefore, one of the groups to be given priority focus when it comes to encouraging (requiring?) vaccination?

So why has our Secretary of labor announced that most truck drivers will be exempt from the federal vaccine mandate?

Some swaps of position in the minor country list, and Lithuania entered at the bottom, pushing Bahrain away.

The countries with most active new Covid cases over the last week showed generally higher numbers.

Items below include a new wonder drug promised by Pfizer, trying to match death and vaccination rates, are US cases about to start rising again, why does the press claim India was “devastated” by the virus, and a possible threat from our dogs.