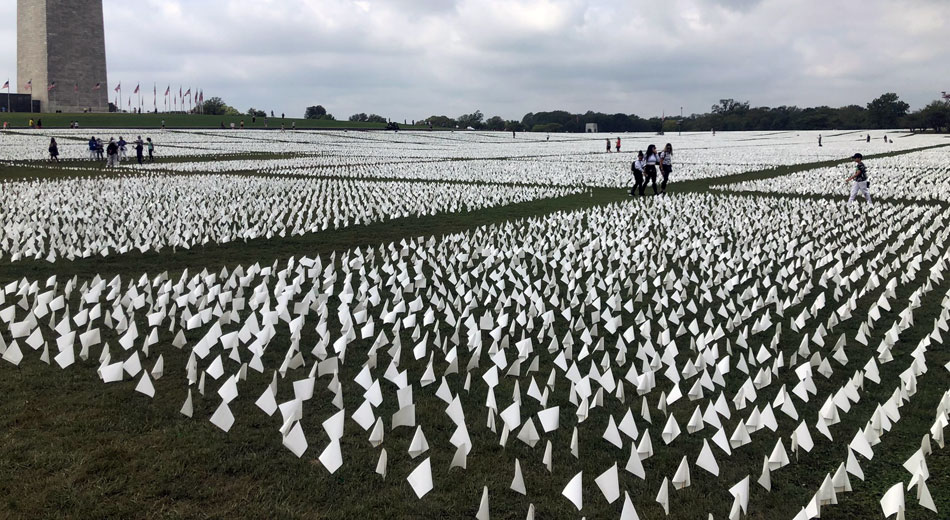 Today’s diary opens with a picture of the National Mall in Washington DC, with over 670,000 flags planted; one per Covid death in this country.  Actually, as of the end of today, we are now at 692,000 deaths, so there’s not enough flags.

This video clip gives another good impression of what it looks like.  That’s a lot of dead people, and so many of those deaths were preventable.  Yes, some were preventable due to the victims not having been vaccinated, but that number is nothing compared to the somewhere between 52% and 81% of people who could have been quickly cured of Covid if given ivermectin as an early treatment.  Even more would be spared if ivermectin were used as a prophylactic, either instead of (or as well as) the vaccine.

So, pick a number, any number, of hundreds of thousands of people that our country has senselessly allowed to die (to express it neutrally and passively) or killed (if you want to be more forceful and active in the description).  That’s a tragedy of proportions unseen, ever before.  And we thought we were more enlightened than our forebears?  No, quite the opposite.  The reaction against ivermectin makes the witch-accusers of Salem 320 years ago look positively enlightened – at least they had ignorance as an excuse.  What is our excuse today?

It isn’t just us.  Even worse, in Australia, a week back, it was made illegal to treat Covid sufferers with ivermectin.  The group who made that ruling based their decision on a shameful review of studies where the Cochrane Group cherry picked a dozen or so negative ivermectin studies – and ignored the 100+ other, positive studies.  They then said on the basis of their review of (only negative) studies, that ivermectin was of no value.  But what of the other 100+ studies that show powerfully positive results???

Can you understand the logic of that?  If ivermectin was allowed, it would be in demand, so best not to allow anyone access to it???  That same logic would also outlaw vaccines.

The second reason was “concerns re toxicity due to dosage determined by social media” – hinting at the infamous and largely mythical “horse dewormer” overdose claims.  But this reason is so readily resolved.  If doctors could formally prescribe ivermectin in pill form, and state the correct dose (take one or two pills, daily, with food), people wouldn’t have to try and puzzle out how much horse paste to give themselves.  That’s a total nonreason.

The third reason is perhaps the most telling.  “It may interfere with the vaccination program”.  This group would rather force vaccines on people, whether they want them or not, than allow people to freely choose between a vaccine and ivermectin (with both having similar levels of protection).  Plus, it ignores the significant percentage of people who are vaccinated, but then get a “breakthrough” case of Covid (and sometimes even die of it).  Even if the group said “we’ll only allow vaccinated people to get IVM” that would be a huge step forward.  But, instead, a blanket ban on prescribing it, for three outrageously ridiculous and intellectually dishonest reasons.

I wrote on Thursday about the FDA reviewing Pfizer’s request for third-shot approval.  On Friday, the FDA panel decided, 16-2, not to allow booster shots for people under 65, due to a lack of data to support it.  Pfizer had put forward an incomplete study of 306 people aged 18-55.  So the FDA panel’s response was fair and appropriate.  You shouldn’t base a decision on something like that with only one small incomplete study.

But.  The panel did find enough evidence to support allowing a third dose for people 65 and over.  I pointed out on Thursday that there was one only trial, a phase one trial (no phase two or three trialing) of 12 people.  Yes, a mere dozen people went through a phase one trial which is only the first of three increasingly more demanding trials, and the FDA considered that non-trial of a dozen people to be sufficient evidence to authorize third doses to the 55 million people in the US in that age group.

The inconsistency within their decision – claiming an incomplete Phase 2/3 trial with 306 people was insufficient, but a Phase 1 trial with 12 people was okay – is very puzzling.

So, even when the FDA fumbles its way into a right decision, it still manages to get a large part of it wrong.  Details here.  But at least they had the fortitude to ignore Fauci’s advocacy for booster shots for all.

There’s also an interesting thought.  If the FDA says there’s no data supporting a third shot for the under 65s, what are they actually saying?  Are they denying the fall-off of the Pfizer vaccine effectiveness (we discuss this below)?  Or are they saying the risk/return equation for a third dose is unclear?

What does that tell you if you’re not yet vaccinated?  If the Pfizer vaccine is only good for six to eight months, and a top-up booster is either dangerous or only marginally beneficial, why would you get the Pfizer shot to start with?  We discuss the Pfizer/Moderna choice below.

One more thing.  Don’t think Pfizer will accept this refusal.  Quite possibly this was a “for show” refusal done to validate a subsequent approval.  Or maybe the FDA will just cave-in to Pfizer (and, inexplicably, White House) pressure.  The head of the NIH is predicting the FDA will approve the booster for everyone, and sooner rather than later.

Here’s some more “dirt” on the Wuhan labs’ culpability for Covid.  Oh – and the original “thought leading” paper published in The Lancet by scientists saying it was impossible for the virus to have been artificially created?  It now turns out that 26 of the 27 scientists who signed the document have links to the Wuhan researchers.

Montenegro swapped places with Andorra in the minor country list, and is now within 5% of equaling the count of high scorer, Seychelles.

Very little change in the major country list (Belgium and Portugal swapped places).  No changes in the death list.

In the most active cases for the last week list, both the UK and US dropped.  Europe as a whole enjoyed a 5% fall in cases, with Spain having the best good fortune, a 41% fall in cases for the week.  Denmark/Sweden/Norway closely matched each other with 33%, 32% and 31% falls, and France dropped 27%.  Germany and Ireland both enjoyed 12% drops.  At the other end, Romania had an 89% rise in cases, Hungary had 43%, and Poland 35%.

The world as a whole had a strong 12% drop in cases.

Items below include an interesting comparison between treatment and vaccine effectiveness, what type of immunity is best, and which vaccine gives longest lasting immunity, the virus continues to mutate, the danger/problem of long Covid, not all doctors are professional, a positive side-effect of the vaccines (apart from immunity!), a new type of vaccine, an off-the-wall observation about ICU statistics, and a disgusting AA passenger.