Tuesday saw the world total of reported Covid cases pass through 200 million.  Here in the US we’re just over 36 million cases, and rising now at a new rate of 100k or greater every day. 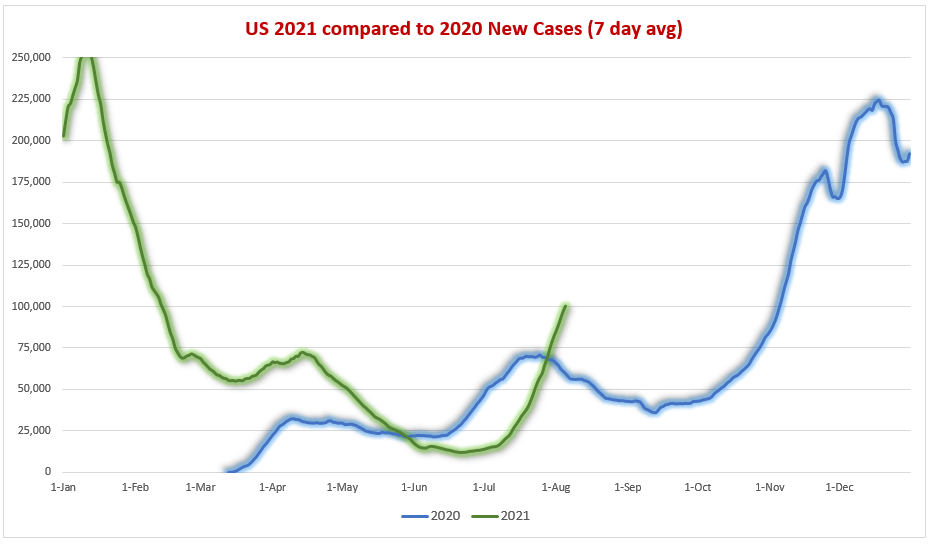 I created a new chart, comparing the seven day average new case count in the US for each day this year with the same day last year.  This helps us to answer a key question – are we winning or losing the battle with Covid?  Are we better off?

As you can see, for all of June and most of July, the answer was triumphantly “Yes, we are”.  But, today, not so much at all, with Thursday being 68% higher than last year’s number, and trending up whereas last year, the numbers were dropping.

There might be some good news coming down the pike, however.  Although our new case numbers have been steeply rising, the rate of new case growth is dropping (the orange line on the above chart).  It is still at a high number, but much less so than a week or two back, and perhaps this new generally downwards trend might continue down further.  Let’s hope so.

But, having hopefully said that, we can’t disagree with the general drop in optimism about the future this new Gallup Poll shows.  On the other hand, the optimism/pessimism ratio is still almost balanced, and hugely better than it was all the way through until mid January this year.

Here’s a terribly pessimistic article about what the future might hold.  The enormous numbers of Covid cases bring with them massively increased chances for even nastier Covid variants to appear.

This is of course merely speculation.  It is not guaranteed.  But it is possible, and the more cases, and the longer each person is unwell, the greater the chance of something truly terrible evolving.

This is a vivid illustration of a further catastrophic consequence we’re risking by not rushing to prescribe ivermectin to anyone and everyone who might become infected with the virus.  Of course, it is also another reason why we need to continue vaccinating, but that’s only one part of the puzzle – we need to reduce both the chance of infection and the severity of any infection that occurs.  Social distancing, mask wearing, and testing gets us part of the way, vaccination gets us part of the way, but the third part of that triumvirate – early and effective treatment – remains overlooked and neglected, even though it is at least as important as the other two components.

In that context, here’s an interesting article that wonders just what standard of proof is needed for deploying an existing and proven to be safe drug (such as ivermectin) for use as a Covid treatment.  Why are we insisting on 110% proof for this, when we’re much more lackadaisical and uncaring with the standard of proof required for experimental new vaccines that, as good as they may or may not be, are proving to be increasingly replete with short term and possibly long term side effects and maybe severe consequences.

St Barth appeared at ninth place in the minor country list.  There were no other changes, although the Seychelles are very slowly inching closer and closer to displacing Andorra at the top of the list.

A lot of movements in the major country lists, but no new countries entered the list.  The US moved up a place.

Astonishingly, in the most active last week country list, no new countries appeared, although there were some substantial shifts in ranking.  Overall, levels of activity were reporting higher in all the placeholder entries.

Items below include Twitter’s continued and inconsistent censoring of fair Covid-19 reporting, another really nasty side-effect of Covid, an update on early treatment protocols that your doctor probably doesn’t want you to know, why are experts so biased against ivermectin, a company now paying $1000 to employees who vaccinate, price rises for vaccines, Israel now to quarantine even vaxxed visitors from high risk countries (including the US), Canada’s great vax rate (but also high rate of case increase), is herd immunity still a thing, why are we still refusing to allow visitors from Europe and elsewhere into the country, NYC to start mandating vaccination before public/indoor activity, Canada gets tough, why is the CDC wading into landlord/tenant law, possibly incompetent hospital administrators in Florida, and in MO, cause of death can be whatever you want it to be.