It has been a relatively quiet time, Covid-wise, since the last diary entry on Thursday.  So not a lot to share today.

And unusually, let’s start with some good news.  New research shows that one of the Tetanus type vaccines and the Measles-Mumps-Rubella vaccine both have some beneficial effects with the Covid virus, too.

So if you’re possibly due for a Tetanus booster anyway, perhaps this is another reason to go and get one.

Not quote so good news – yet again, the EU’s attempts to keep its member nations all marching in lock-step with each other and official EU diktats has foundered on the rock of Covid concerns.

Last Monday, the EU as a whole decided to ignore the US being way over the trigger-point at which EU policy required it to be moved to the high-risk category with more restrictions on travel from the US to the EU.  But on Friday, Germany decided, perhaps after noting its own stubbornly growing case numbers, to unilaterally move the US to its own high-risk category.

The result is that is has become almost impossible for non-vaccinated people to travel from the US to Germany.  This took effect today – details here.

The minor country list sees the Seychelles getting very close to toppling Andorra from lead position, and Gibraltar swapped places with Bahrain.  At the bottom of the list, Luxembourg has dropped off and been replaced by Aruba.

An unusually large number of changes in the major country list, with the most notable for most readers being the US rising now to second place.  The US seems likely to hold that position for at least the next short while.  France also rose two places.

There were no changes on the death rate list.

The list of countries with the most new Covid cases over the last week shows the usual large changes, with Malaysia appearing from nowhere and heading straight to fourth place, and the US now registering near the bottom of the list.

Although the numbers of cases seemed to be generally up in the list, the world as a whole reported a 2% drop.  Europe had a tiny increase of 0.2%, with the most affected countries being Switzerland with an 81% rise, Austria up 58%, Germany up 56% and Norway at 27%.  Spain had the largest drop – 39%, followed by Netherlands (11%) and Belgium (8%).

Coming back to the global rise of 2%, that, and the modest changes in numbers in previous weeks too, is surprising.  Where are the Delta variant impacts?  Why have some nations been impacted by the Delta variant (such as the UK and US) but others not nearly so much? 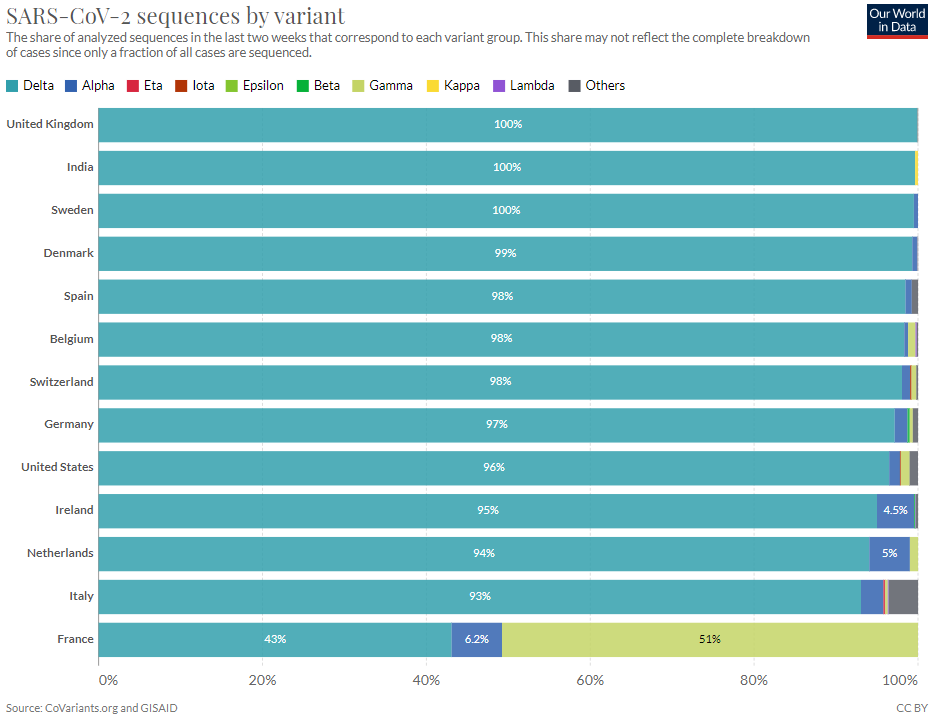 Another question – talking about the Delta variant, look at the table above.  Why does France have such an utterly and completely different set of virus variants compared to its neighbors – Belgium, Germany, Switzerland, Italy and Spain (and other nearby European countries)?

The European borders are again very open, so why is France so incredibly different to its neighbors?  I’m not sure if it is good or bad that the Gamma variant has become predominant in France, but I am very sure it is significant.  The last time I saved this chart was on 23 July – here it is again. 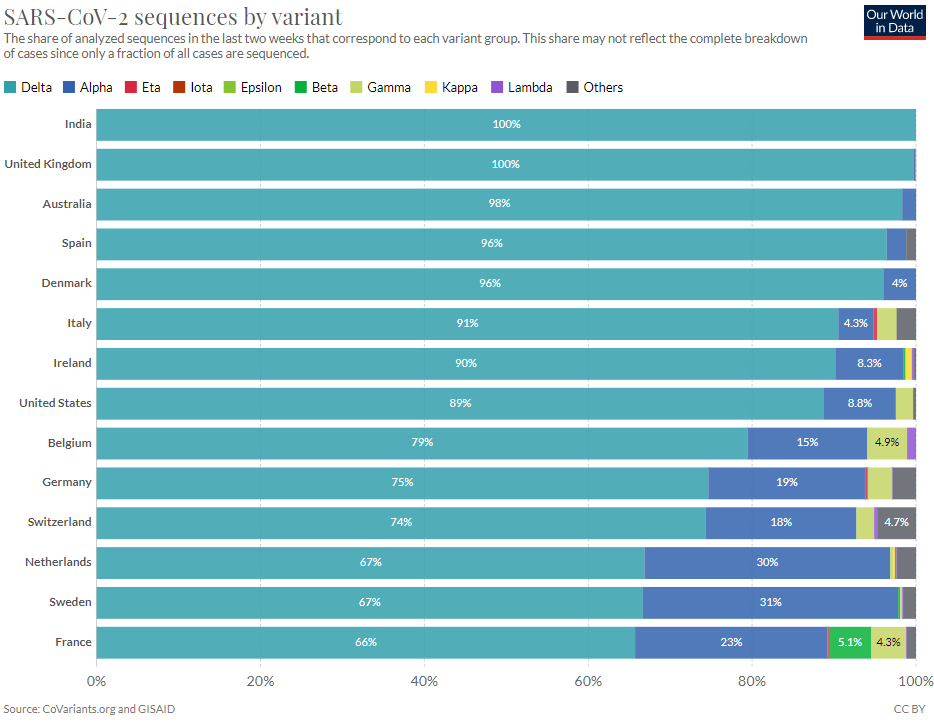 Back then, the Gamma variant was present in reasonably similar numbers in Italy, Germany, Switzerland, and France.  But in three week, it has largely disappeared in other countries while soaring in France?

The answers to puzzles like this may give us clues to the strengths and weaknesses of the virus and its variants, and for sure, I’d like to know all about its weaknesses in particular.

Items below include a startling impact of the pandemic on infants, another virus variant that may or may not be significant, China’s growing control of the scientific media and virus reporting, the surprising demographics of the vaccine-hesitant, the Supreme Court is okay with educational vaccine mandates, a new measure for social distancing, lockdowns, mask wearing, etc, the minimal impact of Covid outbreaks on cruise ships now, Canada’s vaccine loophole, Mexico’s different approach, and the strangest shortage yet.