Here’s a brilliant article that I suggest is a “must-read” for you – it discusses in magisterial and very even-handed detail the origins of the coronavirus, and makes mincemeat of some of the ridiculous other theories being floated by people with vested interests.

Note – if you can’t access it because you’ve used up your ration of free articles, open it in an incognito window and it will appear.

And now, having read the above article and noted the prominent role of Dr Fauci and the department he works for, NIAID, in creating the virus, have a look at this video clip where Dr Fauci assumes a mantle of aggrieved innocence and then carefully chooses his words to deny the undeniable, by saying that his department did not fund the “gain of function” research that created the Covid virus.  Strictly speaking, he is almost true – they didn’t directly send money to China.  Instead, they gave the money to an American company that in turn sub-contracted with China to do the research.

I’ve got to add one extra comment that few others are daring to make on this matter.  How stupid is it to cooperate with China and fund their research into a deadly bioweapon (Covid)?  That’s like giving money and know-how to the Soviet Union during the cold war to help them develop nuclear weapons.  This article points out that China has been developing bioweapons for at least six years and expects them to be used in any future “high-intensity” conflict (ie a war with us) as “the core weapon for victory”.

Talking about the perhaps-not-quite-as-good-as-earlier-perceived-to-be Dr Fauci, we might be spared his on-going puzzling statements about mask wearing, including this one predicting that we might all voluntarily continue wearing masks to avoid ‘flu and other ailments.

The reason for Fauci running out of stupid things to say about masks is because the CDC on Thursday surprised us all by suddenly announcing that if you’re vaccinated, you no longer need to wear a mask outdoors or indoors, but you still have to wear a mask on public transport.

They didn’t explain the science behind their 180° turnaround, nor did they explain why it is safe to be maskless in most indoor places, but not on a bus or in a plane.  The puzzling and unexpected nature of their announcement, and lack of explanation, leaves one wondering if this was due to a former mistake on their part that they’re embarrassed to admit, or if it was due to political pressure, or what/why.

Keep in mind that states, counties and cities may still have more restrictive mask policies.  But, and here’s the thing.  With this CDC statement, all mask policies are now becoming essentially unenforceable.  Anyone challenged about not wearing a mask needs to simply say “I’ve been vaccinated” and there’s no way that statement can be challenged or supported, due to the lack of any standardized type of “vaccine passport”.

Do you really think the people who refuse to be vaccinated will cooperate and continue wearing masks?  I surely don’t.  This is the tipping point for me – I’ve been delaying getting vaccinated as long as I can, but I now expect the risk of infection will massively increase due to non-vaccinated people stopping wearing masks.  Remember, wearing a mask primarily protects other people, not the mask wearer, and so your risk significantly increases if other people stop wearing a mask, even if you continue to do so yourself.

Accordingly, I’m going to go and get the Johnson & Johnson jab.  If you’ve been delaying getting vaccinated too, I suggest you do the same.

Talking about struggling to believe what the CDC says these days (actually, their record has been far from perfect prior to now, too) here’s an article in which the CDC is accused of grossly exaggerating the risks of outdoor transmission of the virus.  That exaggeration is artfully obscured by their phrase “less than 10%” – which of course includes all numbers lower, even 0.00001%, so while being technically correct, their choice of 10% as a “no more than” reference point is deceptive.

Here’s another “must-read” article, headed Tens of Thousands of Lives Could Have Been Saved if Research on COVID Treatments Hadn’t Been Suppressed, Doctors and Economists Say.

The article points out an interesting motivation for why effective safe inexpensive cures have been actively suppressed.  It isn’t just to boost the sales of expensive new anti-viral treatments.  The vaccines now earning big pharma billions of dollars only qualified for their emergency use authorizations on the basis there were no other effective treatments available.  Is that really what it was all about – lying about the effectiveness of hydroxychloroquine and ivermectin so as to get vaccines rushed through trials and evaluations?

The only point I disagree with the article about is the count of lives that could have been saved.  It is much more than tens of thousands.  With almost 600,000 dead in the US alone, the unnecessary death count is in the hundreds of thousands, not merely the tens of thousands.

Talking about the CDC and also about vaccines, why is the CDC limiting the review of people who have been vaccinated and then infected?  While there’s nothing surprising, per se, with vaccinated people still getting infected, it is valuable information to profile who still got infected to see if we can understand if some people are more at risk of vaccine failure than others.  The CDC’s lack of curiosity on this point is, itself, curious.

Here’s an interesting article suggesting there were 13 mistakes that caused the global response to the virus to be worse than it could/should have been.  It makes some good points, but it omits a huge massive 14th mistake – the refusal to adopt across-the-board HCQ and IVM use.

At a “ground zero” level, here is a terrible terrible video report by an ER nurse who saw the errors and mistakes at first hand.  Here is more about the nurse, if you are interested.

No shifts in US state numbers.  Bahrain moved up one position in the minor country list, with Luxembourg moving down a place to make room for Bahrain.

Sweden moved up one, pushing the US down to third place.  Jordan and Argentina swapped places at the bottom of the list.

The UK dropped a place in the death list, while Poland moved up, and Mexico pushed Portugal off the bottom of the list.

The usual series of stronger swings on the cases in the last seven day list.  India is now the 19th worst country, with 1,840 cases/million in the last week, but this shows a 6% drop from the rate being reported a week earlier.  It is possible that India’s latest “wave” may have peaked and now be heading down again – perhaps because they’ve started to use ivermectin in their battle against the virus (discussed below). 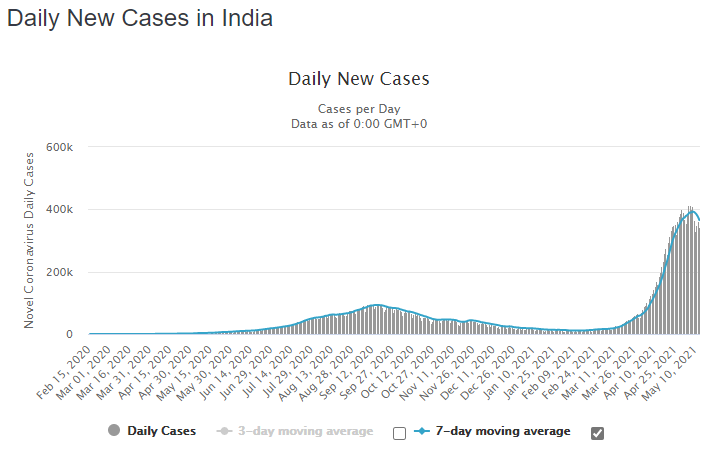 Items below include the puzzle of the rapidly appearing numbers of virus mutations, what to do if you’ve lost your sense of smell from Covid, another reason for men to urgently get vaccinated, India’s states are turning to ivermectin in their battles against the virus, the Philippines too is starting to allow IVM use, Canada massively messes up its vaccination program, world vaccination numbers are climbing encouragingly, and Australia’s extended country-closure is puzzling.