In very good news, after several days of falling new cases in the US, Sunday saw the lowest number of new cases reported since mid September (34,746). 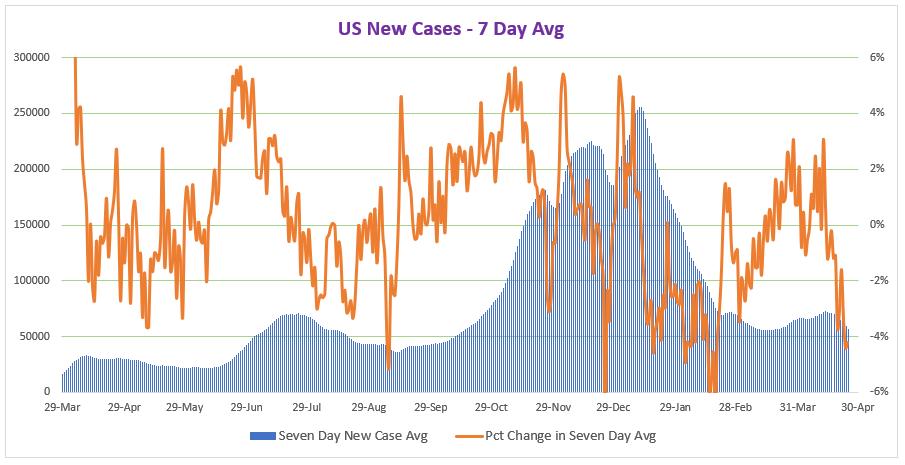 A similar feat occurred in the UK with the lowest number since early September.  Let’s hope these are vaccine-inspired numbers and therefore may continue, not only at their current low levels, but might drop still further.

After an unnecessary ten day halt, the CDC and FDA announced on Friday they were lifting their suspension on using the Johnson & Johnson vaccine, although they are now having a safety warning added to the vaccine.

That was a sad waste of ten days, and of course, although Dr Fauci thought suspending the vaccine would make feel people more confident of taking it, opinion polling now suggests only about half the country would be willing to “risk” taking the J&J vaccine.

It remains my preferred vaccine, indeed, to prove the point I even asked at a Walmart this afternoon if they could give me a shot.  Frustratingly, although their store shows, online, as having the vaccine in stock, they said they don’t have any, haven’t had any for a long time, and don’t know when/if they’ll get more.  They offered the Moderna instead, which I declined.

An interesting new study was released this week, suggesting that your risk of being infected by the virus is almost identical if you are 60 ft away from someone else as if you are 6 ft away.  How can that be so?

The answer appears to be due to a slow but clear realization that possibly the most likely way of becoming infected is actually the way that, for the longest time, the authorities told us was not possible and not happening.  Initially, we were told the biggest risk was from touching an exposed surface then sticking our hands in our mouths.  The risk of someone nearby coughing at us, and expelling tiny moisture droplets infected with the virus was a low risk, and the risk of aerosolized particles, being expelled by people just as part of ordinary breathing and talking, was said to be close to if not totally at a zero risk point.

Now, over a year later, it appears the authorities got that all dead wrong (and, yes, the word “dead” is sadly appropriate).  The lowest risk by far is through touching infected surfaces.  Droplet transmission remains a factor, but the highest risk is via aerosolized particles.

The relevant property of aerosolized particles is they hang, suspended, floating in the air, for minutes, maybe even for hours.  Air currents can waft aerosol particles from someone on the other side of the room to where you are.

Droplets quickly fall to the ground, and that is where the six foot rule basically came from, but aerosolized particles can travel on air currents.  Hence the study’s findings that the risk of infection is the same at 60 ft as at 6 ft.  Sadly, the study doesn’t seem to have also looked at the risk at 3 ft or 1 ft; and perhaps it is telling us “the low risk at 6 ft is still low at 60 ft” rather than “the high risk at 6 ft is still high at 60 ft”.

The key preventative measure, as well as masks, is air changes – either by simply bringing fresh air in and displacing the stale air out, or by recirculating the air through HEPA filters to get rid of the aerosolized particles.

What planet or alternate dimension does the FDA inhabit?  They have described ivermectin as “can be very dangerous”.  This is a drug that has been safely used billions of times, over 33 years, the discovery of which won its discoverer the Nobel Prize, and which features on the WHO list of essential medicines.

Here’s an excellent and must-read article that puts the FDA statement into the scurrilous context it deserves to be.

As mentioned on Thursday, South Dakota and Rhode Island swapped places in the US case list.

In the minor country case list, Gibraltar bizarrely shows a lower cumulative total than it did last week.  This is due to their correcting some numbers last week.

Portugal drops two places in the major country case list, and as also reported on Thursday, the UK has dropped off the list.

The US drops two places on the death list, and Poland rises two.

As I said on Thursday, I am now limiting the countries in our “New Cases Reported Last Week” table to those countries with more than one million population, which has caused even more changes than normal to that (hopefully!) interesting list.  I’ve italicised the countries now removed due to their small population.

It is again worthy of note that India, while generating much newspaper coverage for suffering a Covid crisis of apparently apocalyptical proportions, is way down at 51st place on the list.  Fifty other countries have up to five times worse rates of new cases, but aren’t getting a bit of newspaper coverage.  To put India’s situation into clearer perspective, their case rate is around the same as in Canada.

Items below include a look at the details of the FDA/CDC review of the J&J vaccine, two new possible treatments, a great new product to make restaurant dining safer, two more articles exposing the unfair bias against low-cost treatments, more about the flight on which one third of passengers are now infected with the virus, a possible new low-cost “universal” virus, Europe might allow vaccinated Americans to visit this summer (but there could be a catch), Japan takes strong action to protect the Olympics, some people can never be pleased, and would someone please explain to poor old Joe Biden that he can’t catch the virus through a video screen.