You may have heard of how a stunning 47 passengers on an A321 flight from India to Hong Kong all tested positive for Covid, 12 days into their Hong Kong quarantine.  They had to show a negative test before boarding the plane in New Delhi, and then were tested (negative) upon arrival in HKG, and no-one showed positive with those two tests.  They had a scheduled further test on day 12 of their quarantine, and it was then that people showed positive (or slightly earlier in some cases where people become obviously unwell).

We don’t know how or where these people became infected.  It could have been prior to the flight (it can take four or five days for an infection to be detected by a test), they might have been infected on the flight, it might be a bad batch of tests, or they might have caught it during their quarantine.  On the other hand, the airline has had some not well defined problems with Covid-related matters in the recent past and was given a short two week ban from operating flights to Hong Kong (that expires tomorrow/Monday). 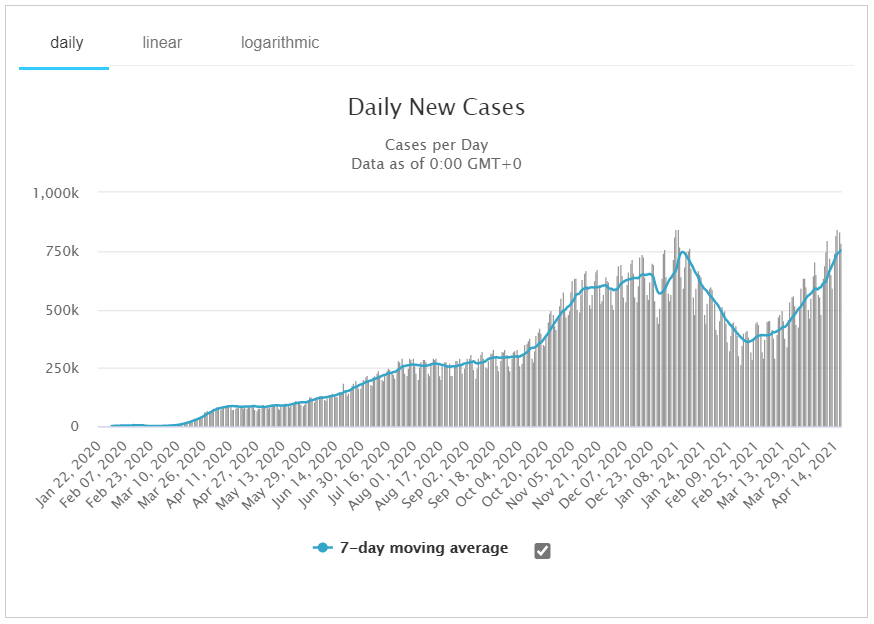 It is interesting to note that the global rate of new Covid cases reported each day is now higher than it has ever been, even though, so far, almost 900 million doses of the vaccine have been dispensed.  Of course, the world population is 7.85 billion, and of those 900 million doses, most are the first of two doses, so the actual number of completely or even partially vaccinated people is less than 900 million. 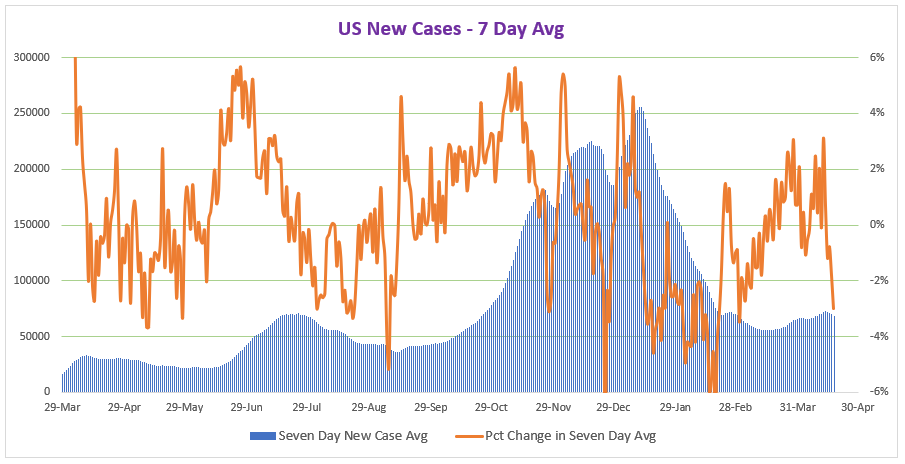 We’re somewhat more fortunate here in the US.  Our drop in Jan/Feb was followed by a gentle rather than steep rise, and the last four days have seen dropping numbers again, including a massive 3% drop in the seven day average today.  Let’s hope that trend continues, and certainly in the US, our vaccination numbers must be starting to have an effect – we’ve now had 206 million doses dispensed (see below for further discussion on vaccination rates).

However, whether we look at the massive increase in world cases, or the more modest increase in the US, both are a salient reminder that our euphoria at the beginning of the year and the rush to attribute a strange sudden sharp drop in cases to early vaccinations was misplaced (as I said at the time).

Indeed, I’ll go further, and suggest that the virus will be part of the world for years to come, albeit hopefully in a massively less impactful form.  We already have Moderna talking about bringing out a booster dose – we risk being in the terrible situation where as fast as the world vaccinates, it still doesn’t get ahead of itself due to the need for new vaccines for new variants and booster shots and so on.

We’re also slowly discovering that when a vaccine is 90% effective, that still means 10% of vaccinated people will get the virus.  This seems to have surprised some people, and it is true that many other vaccines are generally closer to 100% effective.

So why are most governments in the world and their health care departments continuing to ignore ivermectin and other low-cost, safe, effective treatments?  Canada now has a public petition underway with people signing it, calling the government to authorize ivermectin treatment. 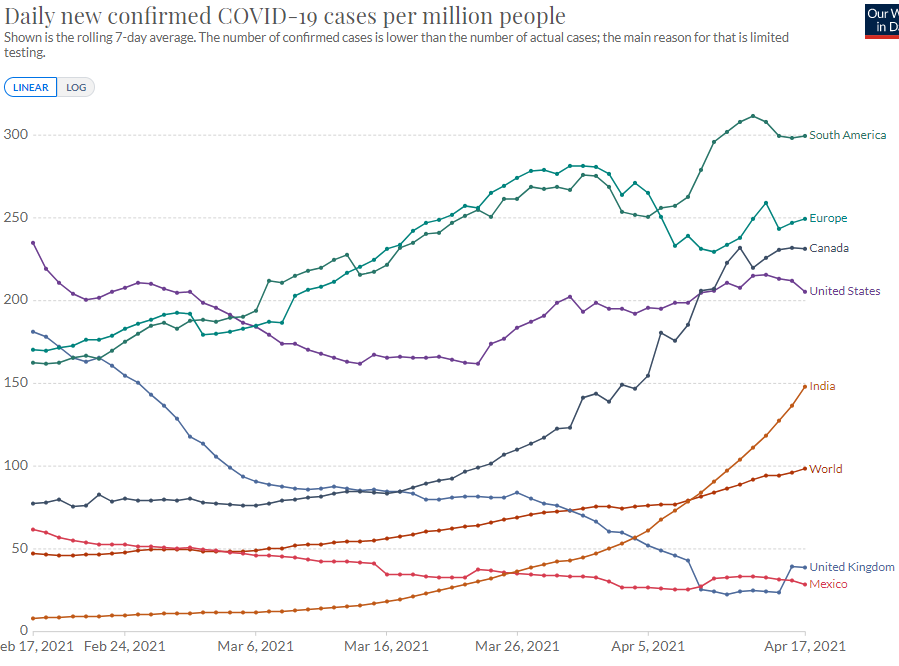 As you can see, Canada’s case rate continues to move ahead of the US case rate, an unheard of situation until a couple of weeks ago.  Let’s hope they get access to ivermectin soon (and that we do, too!).

A reminder that on Thursday I added a new table, showing the countries with the most active rates of infection over the last week.  Because this is new, I don’t yet have a value for one week prior, but am showing Thursday’s numbers today, and from the next diary entry forwards, I’ll be able to show proper week ago data as well as current data.

A change in the US best states – Maine dropped one place and Oregon moved up one.  There were no changes in the death rankings in the US.

Israel, almost completely vaccinated, moved down one place in the minor country list.

The Netherlands moved up two places in the major country list, and UK is now at the very bottom of that list.

Portugal dropped two places on the death list, and Mexico dropped off, being replaced by Poland.  The US and Brazil are almost exactly the same on the death rate list, and it is likely Brazil will move ahead by Thursday.

Although the recent new case activity table only had three days of data between the Thursday report and today’s report, it still showed some major jumps in positions.  This seems to be an interesting table to watch into the future.  I could also add a “countries with the lowest rates of new cases” table, but it wouldn’t be so interesting – there are nine countries all with rates of new cases below 1 per million people in the last seven days.

Items below include a discussion on how low a daily new case count is needed for a country to declare it has beaten the virus, should a gym owner in Quebec be charged with manslaughter after a patron died from Covid in his gym, the Biden administration is to spend $1.7 billion on virus control measures, while overlooking the most valuable and lowest cost measures, a reminder about what to expect/hope for after being infected by the virus, big Pharma can’t agree to unite and work together to solve vaccine problems, double standards that disadvantage the J&J vaccine while unfairly boosting the Pfizer and Moderna vaccines, some common sense in Poland but extended foolishness in the US, the US passes a very good vaccine milestone, and some speculation about the possible national implications of NV’s reopening.