Yesterday and today both saw new case numbers in the US increase over those of a week ago.  That’s not to say we’re heading to the next “wave” of new case growth, but the always perplexing plunge in new case numbers seems to have run out of steam for a while.

The really strange thing about this is that we are vaccinating more and more people every day.  If – and that’s a big if – the drastic drop in cases since early January is vaccine related, there’s no reason why it should stop, because every day a larger percent of the country have been vaccinated.  The “herd immunity” concept, whatever it truly might be, is becoming stronger every day, both as a result of vaccinations and possibly as a result of people who have been infected directly with the virus, too.

As you’ll know from our earlier commentaries, I’ve never thought the almost five-fold drop in daily new cases was a result of any type of herd immunity, and I’ve never seen any credible explanation for what caused it, and similarly, have no idea for why numbers have now leveled out again.  On the other hand, to seize the optimistic side of the stick, maybe, like a couple of weeks ago, the last two days are semi-random anomalies and on Friday, numbers will start dropping again.  Let’s hope so.

Another possible explanation – previously offered for the drop in cases, and now maybe also relevant for the rise in cases again, is the country’s overall compliance with mask-wearing and social distancing.  But I disagree, and now for a new reason, too.

I’d earlier disagreed that better compliance rates were driving the drop in cases, because according to measures such as the IHME numbers, there had been very little change in compliance in December/January/February, although for sure there has been a reduction in social distancing in March.  The new reason for doubting any link between these measures and new case numbers are these two interesting articles (one  two), that point to very similar case rate numbers between states that had very different approaches to mask wearing and social distancing.

I have always believed that both social distancing and mask wearing were important and impactful on virus spreading rates, and indeed, I still favor that point of view, because it seems so “obvious” and intuitive that it should be so.  But, as our history of infection rate data increases and becomes more meaningful, it is hard to see obvious links to prove that belief, and I’ve certainly become much less obsessive about mask wearing while outdoors and not in a high-density situation with lots of other people close to me.

The virus continues to puzzle and perplex.

Talking about continuing to puzzle and perplex, the issue of pre-hospitalization treatments certainly continues to puzzle and perplex.  Here’s an article that talks about investigating new treatments – it starts off encouragingly, but then discards both ivermectin and hydroxychloroquine with one liner unattributed statements referring to their lack of value.  As you surely know, the evidence steadily continues to overwhelmingly show more and more support for the use of both.

This article takes a different approach, starting from the fundamental and surely obvious point that telling newly infected people to do nothing and wait until they become seriously sick is not sensible.  Rather than scrambling to try and counter the virus once it has taken over one’s body, it is so much easier and better to apply early easy treatments, the same as with most other diseases.  Imagine if the response to someone with cancer was “wait until you’re so unwell you need to be hospitalized, and then we’ll see what we can do”.

Although I’ve followed much of the virus situation closely over the last 15 months, I’ve never really understood why Scott Atlas, a Trump-era advisor on the virus and how to respond to it, was so vilified and hated.  And before you rush to tell me, pause for a moment and examine how it is you think you know the things you’re about to share.

Apparently, he never said many of the things he is alleged to have said, and in some cases, clearly said completely the opposite.  Here’s an excellent article that offers a must-read response to his critics.  It is relevant both to the virus and the times we live in, in general. 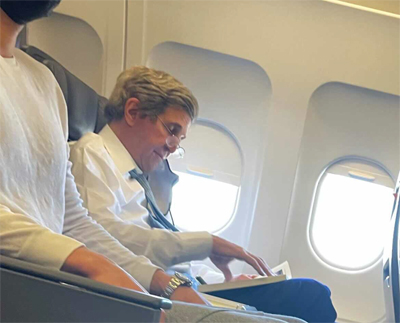 They say a picture is worth a thousand words.  So there’s not much else to add to this picture of an instantly recognizable politician, in first class on an American Airlines flight between Boston and Washington, and, ahem, not wearing his mask, even though seated next to another passenger and clearly neither eating nor drinking at the time.

Surely this is the ultimate expression of “do as I say, not as I do”.

American Airlines says it is “looking in to it”.  There’s no “looking in to it” for normal passengers like you and me – we must wear masks or risk being banned for life.  But people like Kerry need not follow the same rules.

There were no changes in death rate positions.

Items below include a look at lots of promising early treatments for the virus, ranging from the commonplace to the exotic, the puzzling story of the mysteriously censored article about treating the virus, the French now have their own virus variant too, does it make sense to halt dispensing the AstraZeneca vaccine, does it make sense for the US to lend the AstraZeneca vaccine to other nations, are vaccinated Americans more dangerous than vaccinated Europeans, and a look at how the cruise industry is trying to restart itself.

The louder you talk or shout, the more virus particles you are thought to expel.  So perhaps it is not surprising that when Disney and other theme parks open in California, there are moves to outlaw screaming.

Good luck with that……