The big topic this week has been the discovery of multiple new mutations of the coronavirus, with the new mutations making the virus significantly more infectious than earlier strains.  It is not yet clear exactly how much more infectious the new strains are, but numbers in the range of 50% – 70% more are being bandied about with more certainty than is probably deserved.

We do know two key general things about the new strains, though :

Put those two factors together, and it isn’t a pretty picture.

Two things we’re not yet certain about :

And one more thing

So put that all together and what does it mean?  Will masks still reduce our risk?  Do we need to socially distance more than at present?

To consider the mask question first, let’s look at an example of how masks work (the numbers are totally made up and simplified to illustrate the point).  Let’s say a person exhales 100 virus particles with every breath, and that an uninfected person needs to inhale 10 in order to become infected.

So, with no mask, and if very close together, the infected person quickly infects the other person.

Now, let’s say that if both people are wearing masks, then for every 100 virus particles breathed out, only 2 are passed on to the other person – a reduction of 98%.  Two particles are less than ten, so no infection is passed on.

Now, with the new virus, let’s say a person breaths out 200 particles with every breath, and a person needs only 5 particles to become infected.

It the mask still reduces 98%, which it would, the uninfected person now gets four instead of two particles, but needs five particles to become infected.  Tjhat’s a very marginal situation.

Masks still work, but not nearly as well as before.  If one person isn’t wearing a mask, maybe that means the other person’s mask, alone, is insufficient.  Or if the two people are standing closer together, or in a crowded indoor environment, or are together for an extended time, the chance of becoming infected, even with both people wearing masks, is much greater than before.

Which points us to the combined answer to the questions about social distancing and mask wearing.

One way to cut down on the number of virus particles presented to you is to keep further away from other people than before, to avoid indoor spaces more, and to limit your time in risky environments even more than before.

Another way is to be more careful about the mask you wear.  Don’t buy a fancy patterned mask that looks nice but works poorly.  Get a simple generic surgical mask, such as are available at Costco or Amazon, for as little as a quarter a piece, and stretch them out so you have mask from just below your eyes to below your chin.  Depending on your face geometry, you might get a better seal if you twist the straps 180° so the top strap of the mask loops around the bottom of your ear, around the back, and then goes from the top of your ear to the bottom of the mask.

Also, be certain to wear the mask correctly.  The colored side should be on the outside, and the white side should be next to your skin, and of course, the thin metal strip is at the top, to bend to improve the fit across your nose.

Consider changing them more regularly than you have in the past, too, because they’re probably building up more pieces of blocked virus on them than before. 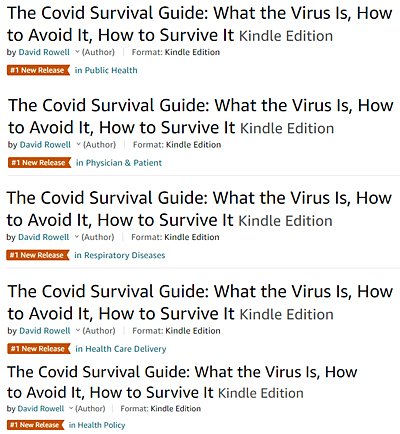 There are many other things you can do, and I cover them in my book.  As you can see, my new book is being enthusiastically purchased at present, and now is available in both Kindle and print form.  I have 220 pages – almost half the entire book – all about how to avoid becoming infected, and what to do if you do become infected, to minimize the impact of the virus on you.  I’m keeping the Kindle version at $4.95 for a bit longer; unfortunately I’ve had to set the print version at $19.95, and even at that price, I barely make a dollar per sale.  But the object is not to make massive profits, but to share helpful advice as widely as possible.

Here’s an article from earlier in the week about the new strains.  It makes great reading, and in particular, raises two points worthy of comment.

Although there have now been new strains identified in South Africa and possibly Nigeria as well as England, it is unfair to say England is where the new mutation occurred.  Rather, it is simply that it was first discovered in England, because in England more people are tested to see what strain of the virus they have.  This knowledge can be very helpful in understanding how the vaccine is evolving, and where different strains are spreading.

Britain, with a population of 66 million, has tested 3,700 virus samples in December.  The US, with 331 million people, has tested 40 samples in the same time period.  So there’s a huge probability that new developments will first be detected in Britain.  This is another deficiency in our US responses to the virus, and should be addressed.

But the effective “early detection” in England has meant many countries (with public health officials who should of course know better) have raced to ban travel from England to their nations.  This is ridiculous, because many of the countries now banning travel from England have already been shown to have cases of the new strains within their borders, and those that don’t will get them, soon enough, if not from England, then from the many other countries that already have it too.

In a tit-for-tat action, Britain – while unhappy with the constraints on travel for its citizens, is now banning travel from South Africa, for the same unreasoning fear.

The other point is that in England alone, 17 different significant mutations, all with greater ability to spread, have been uncovered.  With greater numbers of virus cases out there, the potential of the virus to mutate is growing in similar proportion.  Who only knows what the next new mutation may be.

If you’ve been a bit anxious about the new mRNA type vaccines, you might be reassured to learn that traditional type vaccines might be available fairly soon.  On the other hand, they might not be as effective as the mRNA vaccines, and might be more quickly circumvented by new strains of the virus.  This is an interesting article about how the mRNA vaccines were developed so quickly and why traditional vaccines have been slower to get to market.

Maine (discussed below) has dropped a place in the case rate list, and Wisconsin has moved off the list, being replaced by new bad-boy state, Utah.

Europe continues to be overrepresented on the minor country list, and Qatar has dropped off the list, being replaced by Panama.

On the major country list, the Czech Republic slightly extended its lead on the US.  On the death list, the US inches closer to the UK, while Czechia is closing the gap in turn with the US.

Items below include more points about the new more infectious virus strain, new tests – one good, one not, the effects of the virus on our brain and nervous system, a new and nasty outcome of a virus infection, an update on the growing number of “nearly approved” vaccines, but a curious contradiction in China, political correctness infecting the CDC and media, a mask study, and placing it in context, and crazy virus-deniers.