One request of you to start with.  I’m getting to the point where I need people to read and comment/critique my Covid book, to suggest improvements, and hopefully even to provide some “quotable quotes” I can use in my publicity and promotion.

I released another new version of the book today, with another 19 pages added, but it still isn’t yet at the point for a “forensic read and review”.  But if you’d be willing to do so when it is finished, please let me know and I’ll send you a finished copy just as soon as it is done (hopefully later this week).

Our American perspective on the virus probably changed for most of us with the stunning news last Thursday night/Friday morning about President Trump now having the virus.  Love him or hate him, you’ll probably have to concede that he has been inordinately careless in his approach to “social distancing”, although that is part of the job requirement of being a leading politician, I guess.

It is also interesting to see what has happened to him after his infection was made public (and also interesting to note the speculation about how long prior to then he had the virus, and how long prior to then he personally knew he had it).  If you go to the CDC or FDA or NIH or WHO websites, you’ll see a statement that there are no officially approved treatments for the virus.  But we know that President Trump has already been given

The lesson from this is that if these are all good enough for President Trump, why are they not good enough for us, too?  Well, the Regeron product is still pre-approval, and Remdesivir is in short supply, and Dexamethasone is only recommended in later stage severe infections, but the other things – aspirin, famotidine (aka Pepcid), melatonin, vitamin D and zinc are all things you can buy at the local drugstore or even supermarket.

So availability isn’t an issue, and neither is cost.  Shouldn’t the various three letter agencies be giving us advice about these products?  As you’ll see in my book (part of it now released extends into the sections discussing these exact products) there is quite a wealth of weakly persuasive evidence in favor of these products, and they’re all on my “worth considering” list.  Why are they not also on the CDC/FCA/NIC/WHO lists, too?

I’d also make the point that these are just the drugs we know about President Trump taking; it may well not be the complete full list.  There are some surprising omissions from that list – hydroxychloroquine and azithromycin, of course, and ivermectin too.  I’m not sure if that means he didn’t take them, or if he did and doesn’t wish to disclose so.

The original timeline had seemed like maybe he caught the virus from Hope Hicks.  Now it increasingly seems like possibly she caught it from him.  Or, who knows – perhaps they both caught it from the same person.

There has been no change in the minor country placings.  In the major country list, Belgium is now back on the list, and is already closing in on South Africa in ninth place.

The big surprise was in the death placings, with Spain dropping two places, with Bolivia and Brazil both displacing Spain.

I continue to get people complaining that I shouldn’t be talking about any of this because I’m not a doctor.  That’s a topic I address at length in the opening sections of my book, but I doubt if any of my critics have first considered those points.

As an extra response to people who only accept advice from people with MD after their names, can I offer you this terrible tale of the things that some MDs are suggesting and selling to the gullible.

I wrote about testing on Thursday, but resisted a long discussion on the ridiculous ban on at-home use of the tests that were designed for, ummm, yes, at-home use.  So instead, I’ll simply point you to this excellent article that says everything I could have said myself.

Here’s some good news about another new experimental treatment/cure for people who have caught the virus.  Let’s hope it proves itself during its trialing stages. 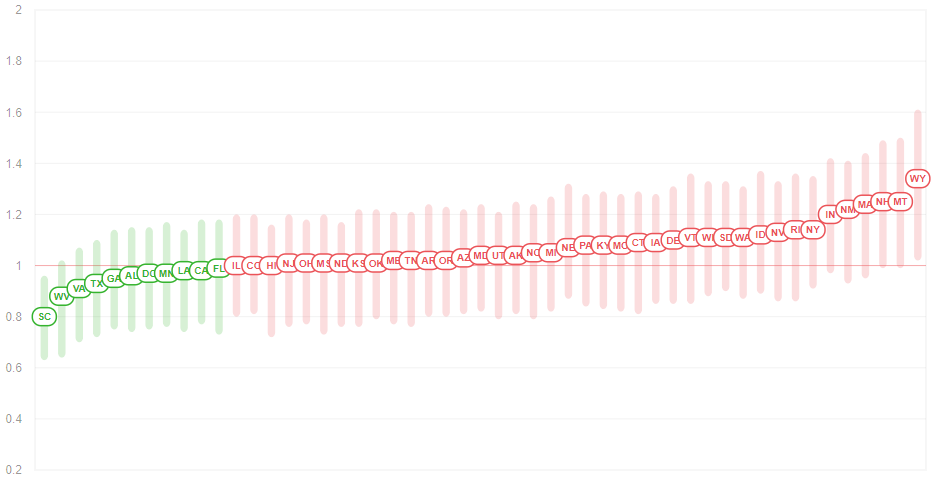 The number of states with declining new case rates continues to dwindle, something that does not bode well.  After being in the low 20s for the first part of last week, it dropped all the way to only 12 on Friday, then 11 on Saturday and again today.  Wyoming continues to be the worst affected state.

There was an interesting article that expressed indignation that Amazon has had 1.44% of its employees catch the coronavirus.  Even worse, 8 of the 19,000 people who caught the virus died from it.  That is terrible, we are told.  Shame on Amazon for being so careless of its employees’ health and safety.

Yes, this also shows how the younger and generally healthier population such as those who work at Amazon are much less at risk than other segments of the country.  But even so, there are fairer ways the article could have been written.

One of the industries that have been very hard hit is the cinema industry.  In truth, going to see a move at the theater is a practice that has been on life-support for some time.  These days we can recreate a “true theatrical experience” at home, with big screen tv, highest quality sound, and better quality images than in a theater, and all for only a thousand dollars or two.

So why go to a theater, sit in an indoor enclosed space for two hours, spend much of it watching trailers for other movies instead of the movie you actually want to watch, be annoyed by the person with the cell phone in the row ahead, and the talking couple in the row behind, and the person with the smelly food next to you, when you can have a more comfortable and much less costly experience at home?

The latest disappointment is another delay to the coming James Bond movie.  Now slated for Easter 2021.

My daughter and I watched a new release movie last night – Enola Holmes (released on Netflix rather than cinematically).  Enola (and the girl playing the role, who astonishingly is also the movie’s producer) is almost exactly Anna’s age, so she found it easy to identify with the heroine and the movie as a whole.  It was quite fun, and it seems likely a sequel will be made.  Usually, most evenings, we’ve been working through the Father Brown mysteries on Britbox, it made a nice change.

How much “minor” illness are you willing to put up with when you decide to take a vaccine?  We think the trial volunteers are probably more willing to bravely endure more inconvenience than most other people, which makes this report of “minor illness” side effects all the more unappealing.