An introductory request.  If you’re finding these twice-weekly Covid-19 diary entries helpful, can I ask you to reciprocate in a small measure.  As you might have seen on Friday, I’m holding the annual fundraising drive to secure the needed funds to be able to continue to devote my time sufficiently to keep writing this for you.  I have to make a choice twice every week at present – do I spend a day researching my latest diary entry, or do I go out and work somewhere for the day instead?

There is a very real opportunity cost to me to stay at home and write this material.  That was a cost I could accept in the “good old days” when multiple other travel-related income streams were helping to fund everything I do and write for you.  But now that those have flatlined out for the foreseeable future, I am reliant on you and your help to keep these articles going.

If it is financially convenient for you, it would be greatly appreciated if you could now consider becoming a Travel Insider Supporter.  It is a fast and easy process to become a member, and you’ll get some additional material as a thank you, including of course full access to the growing book I’m writing on the virus.

Talking about which, I released the 11th pre-publication version of the book earlier today, including another 22 pages of content (a reworked section on “Have the Sacrifices We’ve Made So Far Been Worth It?”, smaller tweaks elsewhere, and a new section at the end).

On Friday, the US went over 2% of the population that has now had the virus.  As of now, 6.7 million Americans are thought to have had a case of the virus.  In an earlier more innocent time, we might have almost viewed that as an accomplishment – “Yay, we’re getting closer to herd immunity and I’m still alive”, but now we think that herd immunity might not last very long at all, there’s no sense of pride or achievement that should accompany that milestone, just disappointment and failure.  Besides which, herd immunity is not expected prior to some number around or above 60%, so even if it were a valuable thing to aim for, we’d only be 1/30th of the way there.

The world passed through 29 million cases on Sunday morning.  It isn’t just the US that is making a mess of things.

Some good news, though,  I updated my article on the benefits of Vitamin D to include a reference to another positive study on the apparent benefits of maintaining a good level of Vitamin D in your system.

I’m starting to think about wearing a mask indoors at present – not because of the virus, but because of the smoke that is everywhere.  It is apparent if I just look down to the end of my driveway.  But not as severe as in some other parts of the west coast, so I’m counting my blessings.  I hope you’re not too smoke-affected, wherever you are.

I’d joked a week or so back about Israel and Vatican City battling it out for a position on the minor country list.  Israel has now “succeeded” (or should that be “failed”) sufficiently as to make tenth position, whereas the Vatican is now happily down at 14th place.

There were no changes at all in the list of major county new case rates since Thursday, but a couple of swaps since last Sunday.

On the death rates list, the UK plunged from 4th to 8th place.

The least surprising news of the last few days has to be the item reporting that people who get sick are twice as likely to have recently eaten at a restaurant.  Yes, it is hard to eat and wear a mask, isn’t it, and when you’re eating, you’re essentially doing the same as what we’ve been lectured never to do – put possibly contaminated items in your mouth.

Hot cooked food isn’t hot enough to kill the virus, so any particles that land on the food – in the kitchen, when carried out to you, and while sitting on your plate as you eat it – are immediately ingested by you.

Here’s a fascinating study – pronouncing some letters are more dangerous than others when it comes to emitting viral particles as you speak.  Perhaps “table manners” needs to extend to “don’t say any words with the letters ‘B’ and ‘P’ in them”.

I’ve noticed the rather alarming nature of the IHME projection for future case rates in the US.  Assuming no magical transformation in mask wearing, they are projecting a steady increase in daily new cases all the way through to Thanksgiving.  Even wearing masks doesn’t look to totally spare us the tribulations ahead.

Apparently Dr Fauci has noticed the same thing, and has some gloomy words to share.

Meanwhile, a Canadian research group says the world is running too many and uncoordinated trials of Covid-19 treatments.  There are over 1,900 trials counted in one of the databases of such things, and they say that most of them are poorly designed and perhaps only a dozen or so will provide truly reliable results.

We agree.  As we’ve observed before, it is a mistake to focus on immediate action at the cost of future good results.  There has been a very unseemly rush to initiate trials, because of the great focus on this topic at present.  A sure way to get funding is to conduct a Covid related trial, and a sure way to get publicity is to come up with a memorable finding.

But we winced to see their comments about hydroxychloroquine – “We still don’t know whether HCQ works for the condition it was initially purported for”.  Actually, we do.  To be kind to the Canadian Professor, maybe he overlooked the 101 completed studies on HCQ (74% of them with positive results) due to all the other studies on other drugs out there at present, but it is unfortunate to make such a fundamentally wrong statement without checking your facts first.

Talking about vaccine progress, the still somewhat mysterious halt on testing of the Oxford/AstraZeneca vaccine has been released.  The media spin is that we should be happy there was a halt – it means the testing is being conducted to a high level.  That’s very clever spin.  As for me, I’m slightly surprised the halt was so brief.  Details here. 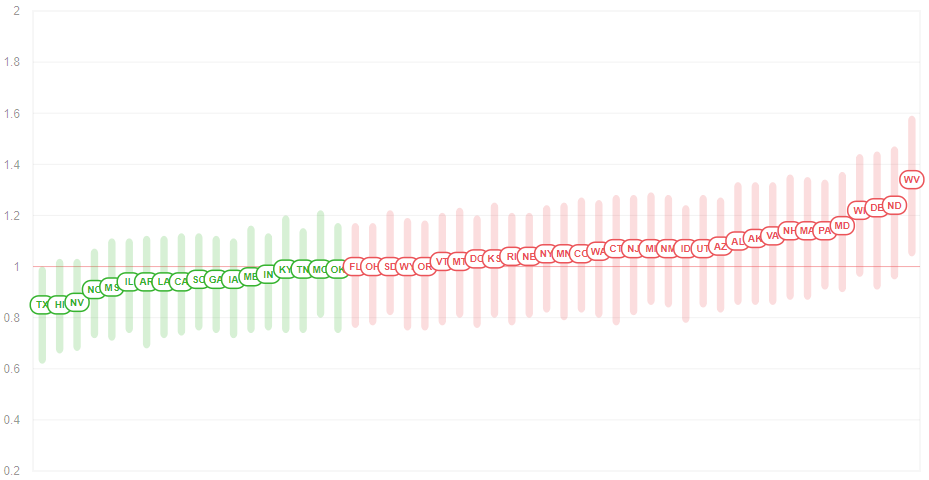 The number of “good” states with declining new case rates remains very low.  It was 19 on Thursday, improved to 21 on Friday, dropped all the way to 17 on Saturday and is 18 today.  West Virginia remains by far the worst offender in terms of runaway growth, followed closely by North Dakota.  As for South Dakota, its new case rate has dropped back down to almost a neither growing nor shrinking rate of 1.0.

Here’s a frustrating article, similar to others that sometimes appear.  It postulates that possibly the virus was active in the Los Angeles area late last year.  That is a possibility, but an unlikely one.

The big issue, as I see it, is if the virus was active in December, why did it then go away for a couple of months before reappearing again?  And the big frustration is – if we suspect a large number of virus cases back then, are there no preserved samples that can now be tested?  Even if there aren’t any, why not test some of the survivors for antibodies?

It seems there are several ways this tantalizing possibility could – and should – be resolved into something more definite.

I’d not realized Las Vegas is still so empty.  This article has some amazing and recent pictures of an almost abandoned Vegas.

But before you let the exciting and enticing low hotel rates lure you to Sin City, keep in mind that in some cases the enormous and outrageous “resort fees” will see your hotel rate double.

One word :  Useless.  That’s the best way to describe this optimistic concept – fans will be required to go through a spray disinfecting station prior to entering a sports stadium in the Chicago area.

This serves no clear purpose.  There is no credible risk of catching the virus from someone’s clothing, and even if that risk was present and credible, the disinfecting only kills off whatever is present, and perhaps allows a small measure of future protection.  New virus particles will start landing on the clothing again almost immediately.

The real risk will be the 5,500+ fans all shouting and screaming and expelling virus particles into the air (many of which will land on clothing, of course).  Masks are also being required, but we wonder if the mask wearing will be universally observed (especially if the attending fans think the disinfectant has somehow made them safe), and also how well masks can contain the greater volumes of released particles as a result of vigorous shouting and singing.

The latest reason why we hate the airlines.  While airlines are getting better about kicking passengers off if they refuse to wear a mask, guess what happens if a passenger asks a flight attendant to also wear a mask.  Yes, a kicking off event swiftly follows, but do you think it is the passenger or the flight attendant who is required to leave…..

Needless to say, the hapless pilot of the Allegiant Air flight refused to intervene.  As is invariably the case.

A reminder – if you’ve found some value in this update (and the 127 previous ones) please help ensure their continuance and consider joining with your fellow Travel Insider readers and becoming a Travel Insider Supporter.