Amazon announced a number of new products on Thursday 24 September.  Here’s my pick of the best of them.

The Echo Dot has always been our favorite of the various different Alexa/Echo devices – it does everything the larger units do, but is sensibly priced at a list price of $50 and an often discounted-down-to-$30 price.  At that sort of price, it is an easy decision to buy one (or more) and a positive value.  The more expensive units seldom do anything much more (there is a model that for another $10 adds a digital clock display that might be of interest) but can cost twice as much, making them much less appealing value propositions.

Perhaps because the Echo Dot is a simple straightforward functional device, it has changed very little from each generation to each new generation until now, with the major change being its outward appearance, most recently being the 3rd generation unit covered in fabric rather than having a solid plastic exterior.

The new 4th generation Echo Dot has a more impactful design change, changing from a hockey puck design to a spherical design.  But the things that matter – microphones and speaker – appear to be, as best we can tell – unchanged.  Other than appearance, the only change Amazon admits to is there is now an auto low-power mode that will sometimes kick in.

With the previous generation unit requiring about 10W of power, and we’ll guess the new unit in low power might require 5W of power, then it would take 200 hours of low-power mode to save 1 kWhr of power.  Assuming the unit can be in low power mode for 23 of every 24 hours, that means you are potentially reducing your power consumption cost from about 2.6 cents a day to 1.4 cents (assuming 11c/kWhr, which is about average for the US).

In other words, don’t rush to upgrade your current units so as to save in power costs.  It would take about 11 1/2 years for the power saving to cover the purchase price of one of these units.  (We also think, from the best we can understand Amazon’s release announcement, they may be updating existing models to support low-power mode too, which would make the benefit disappear entirely.) 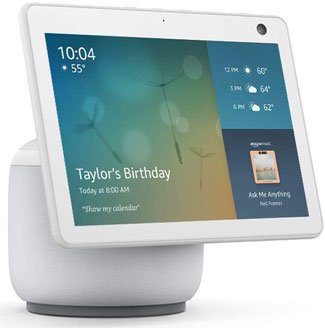 Amazon also released some other Echo units.  The most interesting is an Echo Show with 10″ screen and connected to a swiveling mount.  The unit is not cheap – $250, which is $20 more than the one it replaces.

The main new feature, apart from a greatly improved camera, is that it will automatically turn to follow where you are in a room – this is useful so you can see the screen, and if you’re in a video call, it means you stay in the picture, even if you are moving around.  That is also presumably useful, but it might be awkward if you’re trying to subtly move out of the picture “accidentally” for some reason or another.

The swivel feature can also be used remotely, so if you’re away from home, you can control your camera and see the area around it to reassure yourself that all is well.  Which leads to the next category of product.

Amazon introduced some basic security monitoring functions into its Alexa/Echo units two years ago – what it calls “Guard”.  This is a clever idea – it allows for other security devices to be connected to an Echo system and to use the Echo capabilities to pass notifications on, and it also allows for the microphones in the Echo units to be listening for alarm sounds from smoke and carbon monoxide detectors.  They don’t need to be connected to the Echo, the Echo unit simply listens for the sound of their alarm.  They also listen for the sound of breaking glass.

A related feature is the ability to have Alexa automatically turn your Echo-connected lights on and off to make it seem like there is someone home (when you’re not at home yourself).  Amazon says it analyzes the patterns of lights being switched on and off in the area you live in, and considers also sunrise/sunset times, and sets similar patterns for your lights.

Guard is an interesting extension of Echo.  The main problem I found is remembering to set it on and off when leaving home and returning again.  However, even that isn’t a problem, because as well as simply giving an Alexa command when arriving/departing, you can also change the status on your phone, switching the Guard features on, no matter where in the world you are.

The service always felt like a bit of a gimmick, or a pre-release limited-feature-set trial.  If so, Amazon must have liked the results of its trialing so far, because it is now adding some additional features.  There’s a catch, however.  To enable the extra features, you have to pay more money – $5/month or $49/year.  This buys you what it calls the Guard Plus service

The extra cost buys you the ability for Alexa to detect the sounds of people walking through your house, a feature to play a dog barking sound if motion is detected (presumably via an additional sensor) outside, and the ability to sound a siren (presumably an external device) when activity is detected inside.

Another feature is being able to access an emergency helpline provided by Amazon.  You just say “Alexa, call for help” to reach what Amazon describes as trained emergency response agents.  Let’s hope they’re better than Amazon’s customer service agents, who these days seem to be primarily based in the Philippines and unimpressive.  We’re not quite sure, and neither yet is Amazon, what exactly these emergency response agents will do, other than patch you through to 911.

We expect to see more accessory sensors and devices being added by third party manufacturers to add to the Guard Plus service.  Maybe it will then become a more compelling feature.

For now, the only substantial advantage the $5/month Plus service has over the free service is listening for inside sounds.  We might consider switching it on if going out of town for several weeks, and then turning it off again when we return.  Otherwise, it doesn’t seem like a compelling new service to pay for.

For a long time, our favorite tv streaming “box” was the Roku.  We still like it, a lot, but feel Amazon’s Fire TV sticks are now slightly better, mainly because of the user interface.

The key parts of the user interface to us is that now we can control almost everything we need from the one remote.  The Fire remote has a power button that turns on (or off) both our television and receiver/amplifier simultaneously, and a volume button to control the volume.  It is now very rare to need to use either the television or receiver remotes.

It also has an Alexa voice activation button – you can push that and speak commands to it.  The only thing it doesn’t have, and the remaining great benefit of the Roku players, is the ability to connect a set of headphones to the remote and listen quietly to programming without disturbing other people in the house.

We definitely see $10 of extra value in the cleverer remote, and whether you have 4K televisions or not yet, adding another $10 for the 4K capability will future-proof your investment.

In other words, there’s no reason to buy either of the two new Fire TV Sticks.  Keep buying the $50 Fire TV Stick 4K.

Amazon announced a new Ring indoor drone.  It has limited capabilities, but you can program it to have a “patrol route” around your home and any time you might wish it to do so, you can have it fly the patrol route while you remotely access its video camera and see what is happening in your home from anywhere in the world.  At the end of a patrol, it flies itself back to its dock and waits in the dock until next called into service.

If it includes going through the kitchen, you can check nothing was left on, if you don’t have an Echo connected thermostat/thermometer, you can check the temperature, and you can check doors and windows for breakages.

The unit will sell for $250 and doesn’t seem to yet be available for pre-order.

Amazon regularly discounts its in-house electronics.  It seems to always have specials on them for Prime Day, for Black Friday, and semi-randomly at other times of the year, too.

If you need to add one of these units right now, then of course, you should do so.  But if this is a discretionary purchase, perhaps wait until the next sale.  I’ll be sure to let you know when that happens.

While we don’t know when they’ll next put their products on sale, it seems likely that this year’s delayed Prime Day sale will be held on 13 October (and possibly for several days after that too).  So there’s not a long time between today and when these products might go on sale.

All in all, there was nothing that made it onto our “must urgently buy right now” list.  And, noting our comment about waiting until the next sale event, there’s nothing on our “wait until on special and buy then” list, either.

But if you’ve resisted a move to adding Alexa Echo devices to your home, perhaps the next special discount promotion might be the time you choose to do so.  The functionality of Echo products overall continues to improve, with Amazon announcing further improvements to Alexa’s conversational capabilities and intonation.

These days, Alexa truly seems every bit as clever as HAL in “2001: A Space Odyssey”, but, noting that Alexa can now control the locks on our doors and our a/c systems, hopefully it won’t misbehave the same way HAL did.