We passed another milestone on the Covid-19 road this afternoon, when the world total count of cases reached 20 million.  Half of those 20 million cases are in just three countries (US 5.2 million, Brazil 3.0 million, India 2.2 million), with the rest of the world sharing the other 9.6 million.  No other country has more than 888k, and already by the time you get to the sixth country on the list, you’re down to under half a million cases.

The extraordinary imbalance of cases continues – and continues to puzzle.  In the first few months, an uneven distribution could be attributed simply to the virus taking time to spread – sort of like dropping some dye into a glass of clear water.  But now, you’d expect a more even spread, similar to the dye in the glass of water after stirring it for a couple of minutes.

We need to understand the reason for the imbalance, because within it surely lies something we can use in our struggle against the virus.

This imbalance is not due to testing.  The US has a higher testing rate than Qatar, but a lower case number.  Lithuania and Australia both have test rates very similar to the US, but have case rates twenty times lower.  We need to understand this.

Colombia appeared on the list of major country case rates for the first time today.

The terrible delays in getting test results have been excused on the basis of we’re testing so many people and the infrastructure can’t keep up with the volume of new tests every day.

Unfortunately, that excuse is wrong.  As this article points out, we’re testing fewer rather than more people every day.  So why the inexcusable delays (sometimes exceeding two weeks) in getting results?

Here’s an article with the optimistic headline “How the world made so much progress on a Covid-19 vaccine so fast“.  But we’re not in quite such a rush to measure progress.  There’s only one valid measure – the day when an effective vaccine is available for you and me.  Until then, optimistic articles such as this are as likely to end up wrong, due to test/trial failures, as they are to be correct.  Optimistic articles don’t save lives.

We’re also concerned at the blurring of distinction between “any” vaccine and an effective vaccine that works for most people.  The goal posts are being steadily moved closer and closer to where the vaccine “progress” is, making the progress seem more exciting and “success” easier to proclaim.

Even Dr Fauci is gently expressing concern – here he is quoted as saying the chance of a vaccine being highly effective is not great.

How would you feel if you or a loved one was vaccinated, only to then get a virus infection and die?  Oh, don’t forget, the drug companies are being given liability waivers, so there’s nothing you can do and no-one you can sue.

One of the sub-texts to the virus issue is that even if you survive an attack of the virus, you might suffer lasting harm.  Here’s another chilling story of how many sufferers are still having problems three months later.

My point is that it really is vastly preferable to avoid catching the virus in the first place.  Not only is your longer term health less at risk, but of course, so too is the ultimate negative outcome, death.  This article claims that we could reduce US deaths by 70,000 between now and 1 December if more people would simply wear a mask.

That’s a huge difference in deaths.  All from wearing a mask (or not).

The excellent rt.live site shows some signs of encouragement.  Now that the US is starting to socially distance more actively again, rt.live is showing a growing number of states where the daily new virus count is starting to fall.  It is such a simple equation – more distancing = fewer cases.

We’ve moved from 20 states enjoying dropping rates on Thursday, to 21 for Friday and Saturday, and now 25 today. 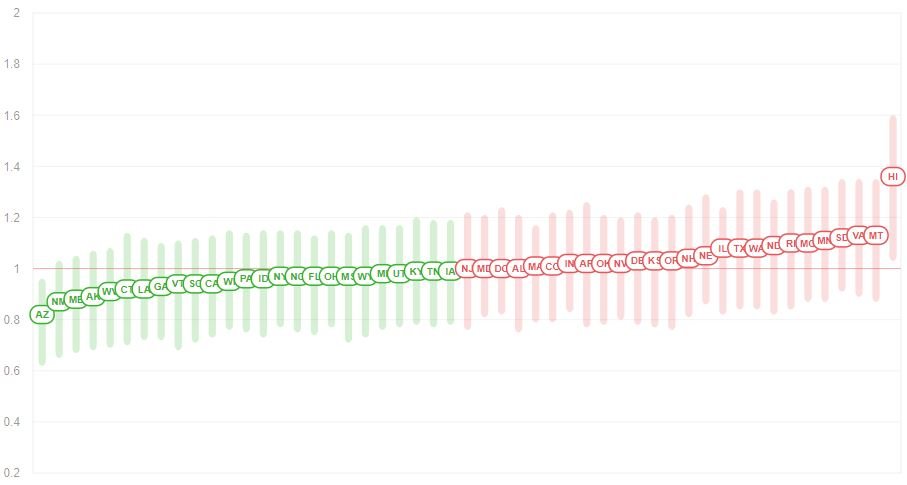 It is surprising to see the two states that previously had the lowest virus rates in the entire country – MT and HI – are now leading the country in terms of growing rates of new cases.  I guess they didn’t learn their lesson the first time around and so now are learning their lesson, much harder, the second time. 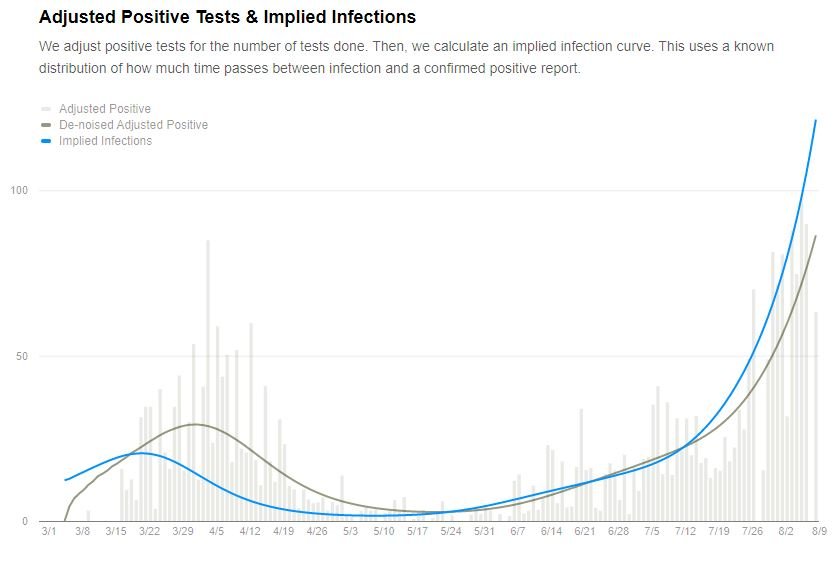 As you can see, Hawaii is now suffering more than six times the daily new cases as it did at its original peak rate.

There continues to be much uncertainty as to exactly how many people have died of the virus.  Even here in the US, we’re unable to do something as seemingly simple as accurately record what people died of.

Here’s an article that looks at the issue from a different perspective – comparing how many people have died this year compared to how many died last year.  In very general terms, it is valid to suggest that the extra number of deaths is primarily due to the virus.

New Zealand continues to enjoy normal life once more.  It is now 100 days since its last virus case was reported.  The only new cases have been people returning back to NZ from overseas, and so far, they have all been successfully contained during quarantine.  Curiously, NZ continues to test people, “just in case” there are some lurking virus cases out there, although after 100 days and no detected new cases, the country seems to be almost totally virus free.

Angry Canadians (a surprising phrase to start with) are reportedly attacking cars with US plates on them, suspecting them to belong to people who unlawfully broke Canada’s travel ban to come into their relatively virus-free country.

At least there is a bona fide sovereign right for Canada to close its border to anyone it wishes.  The same is probably not true of states within the US, with it seeming to be unconstitutional for one state to refuse people from another state to enter.  There are some cases going through the court system about this at present, but by the time they are finally heard, appealed, and re-appealed, hopefully the virus will no longer be a factor, and the states will then move to have the cases struck off due to no longer being relevant to the present situation.

Even if states can turn people away, should they?  There’s precious little value that we see, in a case where the restrictions are so porous and selective.  Close down and isolate a state, 100% – that might work.  But none of the states are proposing or doing that, including, tragically, Hawaii (as you can see above, they came very close to eliminating the virus before then giving up and welcoming the virus back).

Here’s an article with a map of the states that are currently enforcing travel restrictions.

One place with no travel restrictions, alas, is Sturgis, SD.  The mayor said “we cannot stop people from coming” to the annual motorbike rally, with approximately 250,000 people expected (although last year it was closer to 500k).

Pictures are showing crowds of bikers galore, with not a mask to be seen anywhere.

Whether or not the town could have forced the cancellation of the event is perhaps open for debate.  But surely it could do something about requiring mask wearing.  If I was a cynic, I’d think the town is all about eagerly making as much money as it can from the bikers without caring about the consequences for themselves, the bikers, or the communities the bikers return back to with new infections to continue spreading.

We’re building a collection of the craziest concepts in restaurant design to “protect” patrons from virus infection.

Here’s a great example.  Plastic bubbles – outside – to somehow supposedly protect patrons from the virus.  This is so wrong, on many levels.  Firstly, the best thing to keep the virus away is fresh air and free air flow.  The plastic bubbles restrict this.  You better hope your meal mates are virus free, because if they aren’t, you’re at greatly increased risk of infection, thanks to the bubble.

Although you’ll also see the bubbles have openings.  Which rather reduces the “protective” concept.  Making them all the more peculiar.