Today saw a couple of watershed numbers.  There was also a credible and disappointing hydroxychloroquine study published a couple of days ago, so I thought another diary entry would be appropriate.

The total number of worldwide cases broke through the 7 million point today (and worldwide deaths exceeded 400,000 for the first time yesterday).  Here in the US, our total case count passed 2 million with little sign of much slowing, although our death rate has been dropping encouragingly.

Although the daily death rate has dropped, the IHME website increased its projected total US deaths by 4 August to 140,496, up about 5,000 from its most recent earlier prediction. 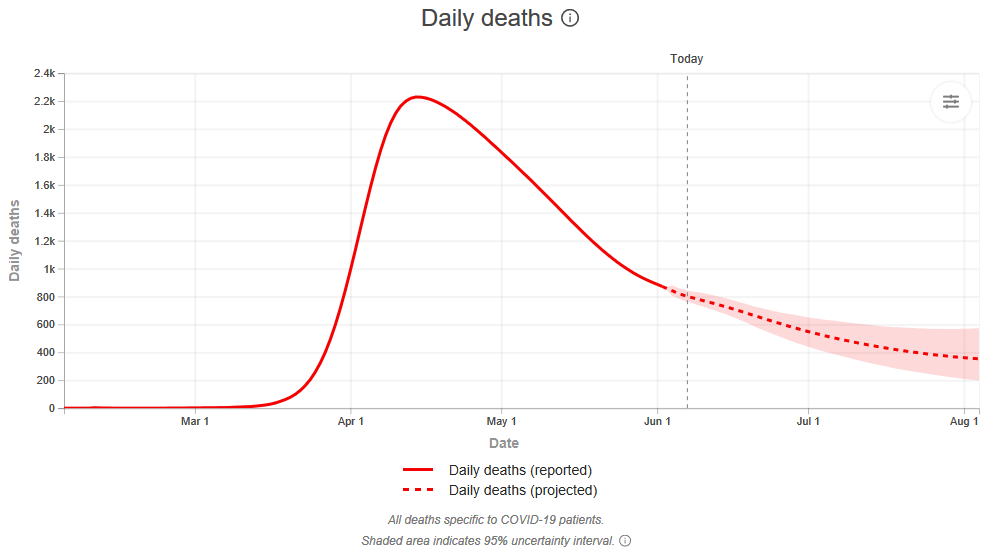 It is also worth noting that whereas, in the past, the end of the projection period was a time by which daily deaths were projected to have dropped to zero, meaning the projected total was a final total; as you can see above, this new model is still showing 354 new deaths on 4 August, making the projection merely a number at a certain point in time, not a final total of all Covid-19 deaths.  That is a significant and not much commented on change.

It no longer offers a final total, nor a clear promise for when we’ll finally be clear of the virus, indeed, the website shows a gentle (if that is the right word in this context) increase in new infections towards the end of the time series.

When can we go out, act normally and without fear, and not wear a mask?  While the New Zealand success story might seem like an outlier – a small island nation able to wall itself off from new incoming infected people – how about Vietnam?  Their daily new case count is now usually zero, and occasionally one.  They have a population of 97.3 million, and land borders with Cambodia, Laos and China.  For that matter, Laos – a smaller country with only 7.3 million – hasn’t had a new reported case since 12 April, and has borders with Vietnam, Cambodia, Thailand, Burma (Myanmar) and China.  How are these people keeping their virus numbers so low?

It almost makes one wonder – what if, against all the odds, China actually was and still is telling the truth about its virus case numbers, too?

Other examples of much more successful that the US countries can be found – compare for example the new case rise and fall in Italy – the country that for a while had the worst affliction of the virus of anywhere in the world – with our own experience in the US. 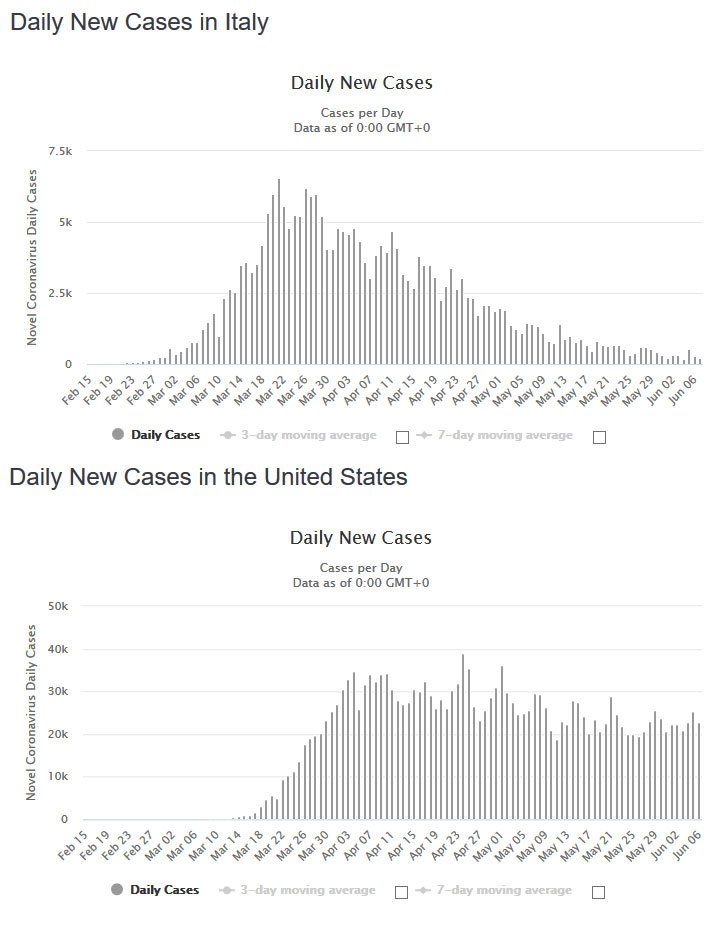 There’s something very wrong with what we’re doing in the US, and there’s precious little reason to believe that the answer to our problems is to open the country up further and faster.  The Rt.live site is showing 14 states today with possible growing rates of new cases. 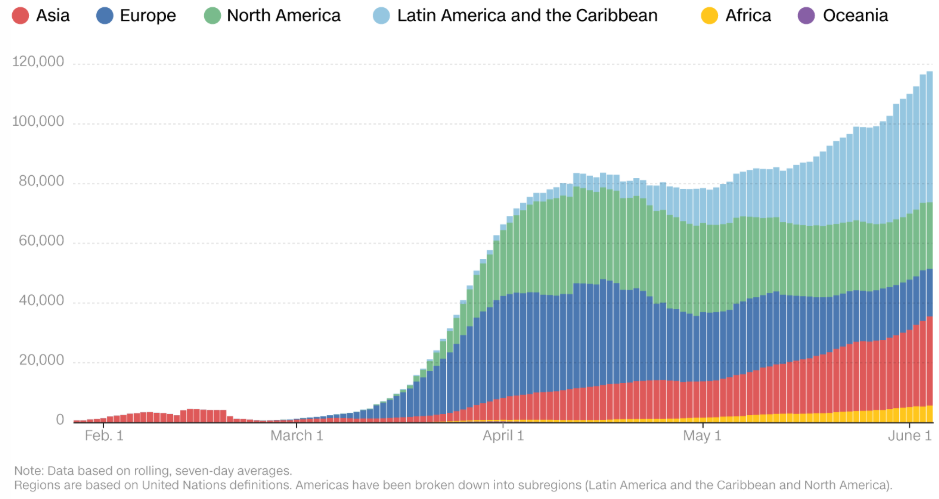 This is an interesting chart, from this page.

Clearly, no region is immune, although equally clearly, some have been hit much harder than others.  The reason for that remains a total mystery, and an intriguing one to answer.  If we could understand why the virus hits some countries worse than others, we might find, as part of that understanding, a cure/preventative.

Here’s another study on hydroxychloroquine that shows disappointing results.  But, yet again, the study doesn’t test HCQ together with zinc, that being the combination which is thought to be most effective.

And, now, a study that seems to be generally well designed and conducted, to see if people who may have been exposed to the virus could reduce their chances of then contracting it by taking HCQ after the potential exposure but before being diagnosed with Covid-19.  That’s a good thing to test for, because one of the claims for HCQ is that it works best in the early stages of the virus developing.

Regrettably, it only had the patients taking HCQ for five days – a longer period might have been interesting to test.  Its five day treatment showed a slightly lower incidence of developed Covid-19 cases, but too small a difference to be statistically significant.

Again, the big question is “What about zinc???”.  But unlike most other studies, this one sort of featured zinc use in its study as well.  If you go to Table S8 in the appendices, you’ll see further analysis of any discernable difference between patients who took zinc and patients who did not take zinc (and also of Vitamin C use as well).

Unfortunately, we don’t know anything about the type and amount of zinc that was taken, or when, and there was no random assignment of who would or would not take zinc (and/or Vitamin C).  Also, unfortunately, the group sizes were so small that there is no statistical validity in the results, but the results certainly did not look very encouraging.

So what can we conclude?  The main part of the study seems to credibly suggest that HCQ – at least, in the form of a five day course after a potential exposure to the virus – does not confer any obvious or substantial benefit.  That is disappointing.  As for HCQ + Zn, that was an afterthought in the study that was not well quantified or qualified, and so the results have no meaningful value, but, although possibly flawed, they also for sure don’t point to any transformatively positive outcome of an HCQ + Zn combination treatment.  Again, a disappointing outcome.

This article tries to cheer us up by saying HCQ is “not dead yet”.  That is true, and there are non-scientific but real-world examples a-plenty where HCQ seems to have had enormous benefit.  (Why does it seem to work well in real-life but not in trials?)  However, the actual value/benefit for HCQ, while possibly not yet negated, has also clearly not been affirmatively established.

As one door closes, another opens?  Here’s some more good news about famotidine aka Pepcid.

This article suggests people with blood type “A” may be at greater risk of contracting a more severe case of the virus. Type A blood is the second most common in the US.

This is interesting for a number of reasons, but also makes it very much harder to understand the true extent of cases out there.  As for future immunity – always a rather uncertain hope – about the best that could be said would be that if you didn’t need antibodies to rid yourself of the virus the first time, you’ll probably be just fine a second time.

Here’s a great world map that shows the different policies of every different country in terms of if they’ll admit visitors or not.  It comes courtesy of IATA, and they promise to keep it up to date.

Call me a cynic, but it seems to me that if a person has already gone to the airport in anticipation of flying somewhere, they are not likely to then volunteer to a checkin agent “well, actually, I’ve probably got the coronavirus, but I’ll be careful”.

However, United is now going to require passengers to declare they are “safe” to travel.

I regularly bemoan the rush to buy “fashion” masks, without any thought to if they actually provide any protection whatsoever for either the wearer or other people around them.  All masks are not created equal.

As an example of that, when official N95 respirator masks were in critically short supply, China invented a new mask rating “KN95”, and started selling KN95 masks at impressively high prices, with the suggestion being they were the same as US-certified N95 masks.

So what does it take for a mask to be designated KN95?  Nothing.  You could gather together a fish net or fly screen and print “KN95” on it if you wished.  KN95 is nothing other than a marketing designator.

This article points out that the vast majority of these masks fail to meet their claimed/implied standard of filtering.

Thank you, China.  First you give us the virus, now you sell us overpriced and dangerous PPE.