One of the things perplexing me greatly is the huge difference in impact the virus is having on different countries.  Why are some countries almost untouched by the virus, and why are others almost overrun by it?  Why do some countries have high fatality rates, and others low?

How is it possible that a neighboring country can have two or more times – sometimes even twenty or more times – greater or lesser infection/death rates than the country it is right next to?  Especially in “borderless” Europe, this is very hard to comprehend.

It is not just country by country differences.  Look also at the difference, at the province level, in Canada (the other provinces didn’t have numbers large enough to be statistically valid) :

What is the special secret that BC alone knows?  What is the major mistake that Quebec is making?

This isn’t just idle curiosity.  This is essential data we need to know.  Clearly there is something very significant, obscured beneath the surface, that is impacting on how effectively the virus spreads, and how lethal it is when people are infected.  If we can identify this thing (or, probably more likely, these things) we then know what to do and what not to do so as to minimize the harm we’re experiencing at present.

This page has a great amount of data for each of the Canadian provinces, and this page has a wealth of data just about British Columbia. 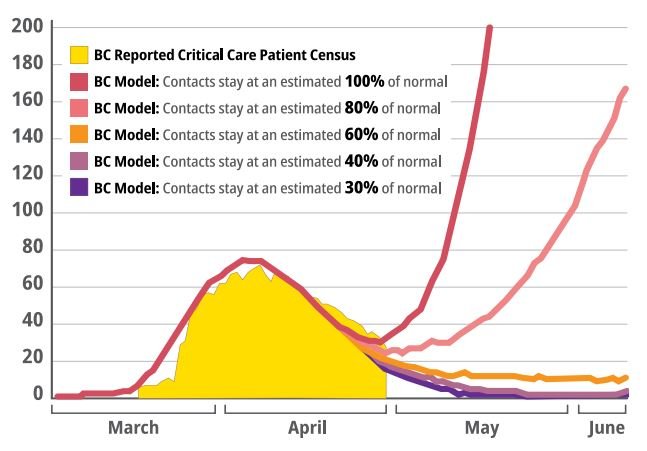 In particular, I found the above table from the BC page fascinating.  It shows the impact social distancing has on the rate of viral spread.  Using the same type of formula as applies to herd immunity, it shows we don’t need to isolate ourselves entirely to squash the virus, we just need to reduce our contacts by 40% – 50%.  The viral growth rate is extremely sensitive to the level of social distancing.

The overriding importance of social distancing is shown on “slide” (page) 25 of the presentation, too.  Interestingly, on that page it suggests that – for normal people, not healthcare workers – PPE (ie masks) are the least effective measure to take.

Confirming the importance of distancing and the lesser importance of masks is this article that finds 90% of all people with the coronavirus in San Francisco are people who were still leaving their homes and traveling to work each day.

Here’s an article that tries to come up with reasons why some countries are more affected than others, but while it raises a number of different possible factors, it then finds examples that contradict each factor.  That doesn’t mean the factors are wrong, it might just mean there are multiple factors and perhaps in one case, one factor is positive and three more are negative, and in the other case, all four are positive, so we get the wrong idea about what is happening to the first factor.

We have wondered if there are some underlying social issues impacting on the effectiveness of different nations and their various distancing strategies.  This is a very interesting set of opinion/attitude surveys across many different countries, and it is surprising to see how generally more alike than different most countries are on most things.

Most of all, we don’t see any overwhelming support for ending the social-distancing and returning to normal in any country.

Perhaps the only truth in all of this is there is no truth.  That statements harks back to my earlier commentaries on how so much of the raw data (and even more of the analysis then applied to it) is faulty and possibly straight out wrong.  This article touches on that point from an interesting perspective.

First, the commonly cited IHME model has come out with its latest revision.  It isn’t good.  It now projects twice as many deaths in the US as it did before (now 134,475 by 4 August).  This revision is unsurprising because, at 72,271 deaths so far, we’ve already exceeded their total death projection made barely a week ago.

Second, researchers have determined that the virus has mutated into a more contagious form than before.  That means more social distancing will be needed.

There’s a couple of alarming implications.  What does this mutated form mean for potential vaccines and potential herd immunity?  Will vaccines being developed for one of the other strains (there are now 14 identified) of the virus work for all 14 strains?  And the same question about herd immunity?  If we come down with one form of the virus, will that mean we’re protected against all other forms, now and in the future?

Here are the rankings for the eight states of any size with the highest infection rates.  There was no change in ranking today.

To put those numbers into context, the death rates per million in the US/Canada are 218/107.  The world average (not a very reliable number) is 33.1.

A lot is being made of New Zealand’s apparent success in limiting/reducing the virus in its country.

But there really is nothing particularly difficult about what it did, and it is a tactic that can scale up or down for any other country.  Simply establish a rigid inviolable lockdown for a few weeks.

While distancing is many times more effective than masks, they remain useful as an additional layer – and as an only layer of defense when you can’t distance.  And so we’re pleased to see that Denver International Airport is now requiring everyone inside its terminal buildings to be masked.

The collapse in air travel, all around the world, is creating some amusing anomalies.  A couple of weeks ago, a small airport in Montana was busier than JFK.  And on 25 April, the world’s busiest airport was Anchorage, Alaska.

Pittsburgh Airport was very proud to tell the world, today, that it will now have the cleanest floors of any aiport, at least for the few seconds between when their fancy new robot sterilizes the floor with UV light and when passengers start walking on it again.  But the good news is if you drop a sandwich while walking behind the robot on the way to your gate, you can happily pick it right up and carry on eating it, I guess.

Call us limited in vision and appreciation, but we can think of lots of places in an airport we’d prefer to be clean before the floor.

Talking about hapless idiots, we don’t know who this man works for or what country he is originally from, but we surely do know he too is a hapless idiot.

Have you noticed the same thing we have?  Every new discovery about this virus is always bad, and never good.  What are the odds of that?  Seriously, why is everything we learn about it in the bad news category?

The latest example of a bad news discovery is learning that the virus doesn’t only infect our lungs, but infects our intestines too.

This article confirms the lack of enthusiasm for masks that the BC presentation, above, showed.  Better than nothing?  Yes.  But a 100% safety shield?  No way.

Another vaccine starts a test on human volunteers.  The more, the merrier.

An unexpected winner during the lockdown?  PC usage is up 75%, and sales are up about 50% on the same time last year.

My sense is the main reason for dropping PC sales over the last few years is less and less need to upgrade/replace existing PCs.  I’ve had my present pair of laptops for longer than any other laptop or desktop PC, ever.  I was once on an annual upgrade cycle, then every two years, but my current lovely Dell laptop is 6 1/2 years old.  That’s an astonishing life.

And on that note of “still going strong”, it is probably a good time to end.