A nice slow Sunday, even the day’s statistics aren’t as bad as sometimes, but that often seems to be the case on a Sunday.  The big opinion piece for the day is down in the “Timing and Numbers” section.  I’ve felt awkward about this for sometime, and feel it needs to be said.

Here are the rankings for the eight states of any size with the highest infection rates.  Qatar moved from #7 to #5, Iceland dropped from #5 to #7, and Ireland displaced Gibraltar at the bottom.

To put those numbers into context, the death rates per million in the US/Canada are 207/98.  The world average (not a very reliable number) is 31.8.

Everyone talks about the need for testing, although most people fail to appreciate exactly the strengths and limitations of testing – in particular, the need to get results quickly, and the rapidly expiring value of a test (ie, you can become infected five minutes after being tested).

There’s another issue that keeps on keeping on as well.  The accuracy of the tests.  You would think this to be the absolute essential element of any testing procedure – that the results it generates are accurate.  An at-home pregnancy test costing as little as $5 is generally 99% accurate.  But these multi-hundred dollar laboratory tests for the coronavirus are massively less accurate, creating potentially very distorted perceptions of who has and who had an infection.

Here’s a long shot possible treatment for people suffering from the virus.  As is always the case, it is very early days yet and way too soon to express confidence in this, but it is another “cross our fingers and hope” possible treatment.

And here’s an article explaining how some researchers have been testing 47 existing approved medications that might also help cure a Covid-19 infection.  Several of them show signs of promise, although again, it is exceedingly early days and way too soon to be too hopeful.

And now, remdesivir.  Here’s an article that describes it now as “scientifically proven”.  That would seem to be stretching the truth beyond breaking point.  There has only been one refereed study of remdesivir that has been published so far (in Britain’s ultra-authoritive The Lancet publication) and that study “scientifically proved” remdesivir was useless.

There has also been a controversial trial in the US for which preliminary results have been released; as I explained yesterday, apparently when it seemed this second trial would also disappoint, the people conducting the trial changed the parameters for what was being tested, and then ended the trial before full data could be obtained.  That’s a bit like changing a car test from “can it drive 500 miles on a tank of gas” (when, with 300 miles driven, the gauge is showing almost empty) to “can it reach a speed of 75 mph on the freeway” and claiming the car test was a success while hoping no-one would realize the thing being tested changed halfway through the test.

Here’s further exposure of the concerning nature of the US remdesivir trial and its subsequent crowning as a successful cure.  Yes, I’ll still accept it if I’m unwell, but please can I also have plenty of the other possible treatments too.

Here are some sensible words on vaccine issues from Bill Gates.  Of note is how his foundation is definitely putting their money where their mouth is and making a huge investment in vaccine development. 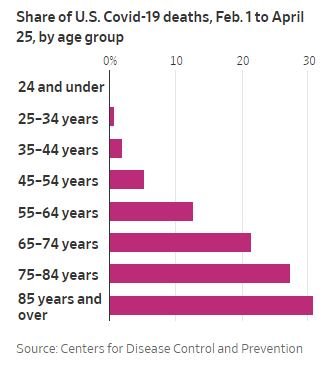 This is an interesting article that sheds more light on the claim the virus takes an average of ten years off a person’s life.  We particularly liked the chart, shown on the left here, that indicates how age selective the virus is.

Why don’t we allow everyone under 45 (or 40, or 35; pick any number you like) to do everything the way they normally would, and offer to subsidize the cost of staying at home only for people over that age.  Most of the economy could continue with only very little impairment, meaning we’d be able to afford to pay the staying at home people and not destroy our entire economy, which currently is suffering the twin problems of collapsing production/earning but spiralling costs/expenditure.  At the same time we’d not be worrying about shortages and problems.

That would be a smart way to approach the virus.  What we’re doing at present is hard not smart.  Why can’t we change this?

Our continued high counts of new cases and deaths is in large part because our stay at home orders have never been well adopted nor enforced.

Every day I see a dozen families mixing and playing together in the cul de sac I live on, and the police refuse to do anything about that.  In some counties, the Sheriff has said he’ll refuse to enforce the Governor’s orders, whatever they are.  And elsewhere, we’re either seeing states let up on their restrictions, or more and more people just decide to stop following them.

This article shows the truth of the last statement.

Here’s an interesting article that contrasts the approaches adopted by Sweden (relaxed, few restrictions) and New Zealand (strict lock down).  Sweden currently is showing a case rate of 2210 per million and a death rate of 265 per million.  New Zealand’s numbers are 308 and 4.  On the face of it, New Zealand is the clear winner, right?

Maybe.  Or maybe not.  The article agrees that right now, NZ has suffered much less than Sweden in terms of cases and deaths.  But which country has the more sustainable model, looking further into the future?  New Zealand’s model relies on keeping its borders closed until the rest of the world is safe; and until that happens, its largest industry – tourism – is largely destroyed.  (Only “largely” rather than completely, though – there is still domestic tourism and also the probability that NZ and Australia will start allowing unrestricted travel between each other.)

The article wonders if maybe, longer term, Sweden’s model might prove the better one.

We have no opinion on this yet – too many unknowns.  But we do agree this pandemic is of course a world-wide problem that will need a world-wide solution.

This is interesting about how China is trying to rewrite internet “history” of its Wuhan virus labs.

We agree with Dr Birx – seeing protesters with no masks and no social distancing is indeed, as she says, “devastatingly worrisome“.